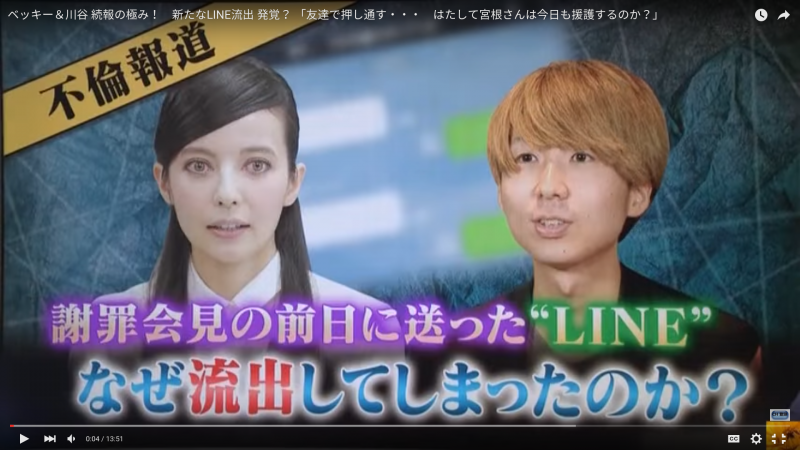 Japanese television personality Becky (ベッキー, Bekkī) experienced a stunning reversal of fortune earlier in January when tabloid media reported that she was having an affair with Enon Kawatani, 27, a vocalist in the popular band Gesu no Kiwami Otome.

As details of the affair became the subject of daytime talk shows and social media chatter throughout the month, Becky found herself dumped entirely as a television host, with her lucrative television commercial contracts torn up as well.

Up to ten commercial sponsors have said they will not renew their contracts with Becky on January 31. Meanwhile, Kawatani is still scheduled to appear with his band, Gesu no Kiwani Otome, on popular television program Music Station to promote a new album due to be released in February.

Becky, 31, has been a popular presence on Japanese television since 1999. With a British father and a Japanese mother, Becky is known for being a lively and virtuous hafu (as people of mixed ancestry are known in Japan) television personality, or “talent” (tarento). Due to her energy, cheerfulness and squeaky-clean image, Becky is said to have appeared in more television commercials than any other tarento in Japan.

In fact, much of social media vitriol has been directed at Becky, while Kawatani seems to be regarded as as wayward accomplice. 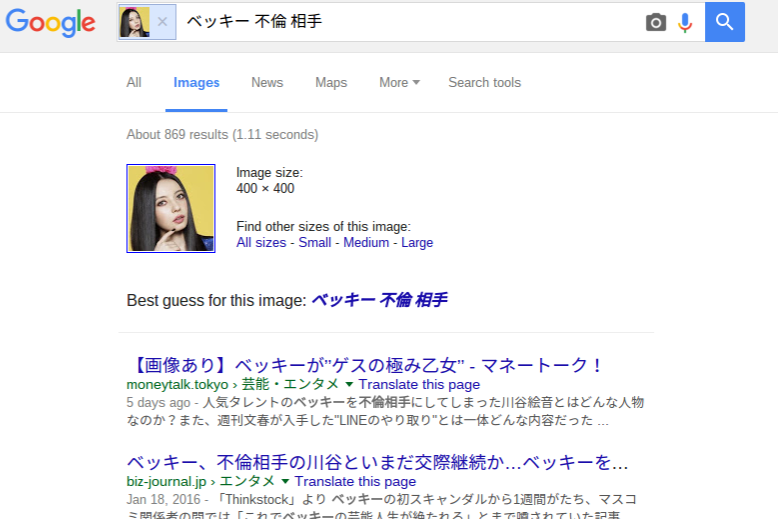 Much of this probably has to do with Becky's relative fame and popularity compared to Kawatani.

However, according to a mainstream Japanese sensibility, the details of Becky's fling with Enon Kawatani contrasted sharply with her public image as a “good girl.” Flings are not unusual among Japan's entertainment personalities, but Becky was a single woman and Kawatani was married, and this is what matters the most to advertisers.

According to Japanese custom, if proof can be found that illicit meetings took place, the aggrieved party, in this case Kawatani's wife, has the right seek damages (慰謝料, isharyo) from Becky as a furin aite  (不倫 相手), an instigator of the affair. Because his wife does not plan to divorce him, Kawatani himself is off the hook.

What made matters worse for Becky was that an apology to her fans when the scandal broke was perceived as being inauthentic. Tabloid Shukan Bunshun has published what appear to be leaked LINE conversations between Becky and Kawatani where they both make light of the situation.

Some Internet commenters speculate Shukan Bunshun had actually hacked into Becky and Kawatani's LINE accounts and the published conversations were made public before either of them knew the tabloid had proof they were having an affair.

Another scenario is that Kawatani's wife notified Shukan Bunshun of the affair in the first place and gave the tabloid access to her husband's LINE account, with the calculated intention of totally demolishing Becky's career. However, there is no proof this is the case.

The result is that while Kawatani has been allowed to sheepishly return to his life, for the time being it looks as though Becky's career is ruined. While Kawatani's status is based on his music, Becky's marketability has been based solely on her image as a chaste, nonthreatening personality, and that image has been destroyed.

Japan's entertainment world can be very harsh on female talent. When Shukan Bunshun reported Minegishi Minami, a founding member of Japanese pop idol ensemble AKB48, might be having an affair, she was quickly demoted and appeared on YouTube sporting a shaved head. 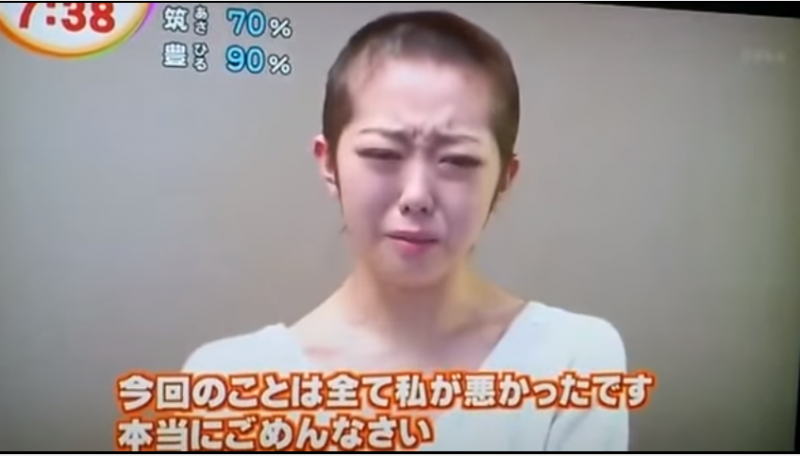 Japanese performance ensemble SMAP also made the headlines in January when they said they planned to break up after nearly 30 years. Japan's tabloids were even more stunned when SMAP did an about-face, saying they would stay together after all. While some commentators suggested the tired and aging act might actually be androids, others said SMAP's rapid reversal demonstrated the power of Japan's talent agencies, and how Japan's talent system is a microcosm of the Japanese working world as well.

Like salaried employees in Japan, at mid-career personalities such as Becky have little opportunity to change jobs and try something new. One misstep and they're out the door.

Not everyone is following the saga of SMAP and Becky, however.

So the entertainment world is front page news in Japan. What the hell is going here?