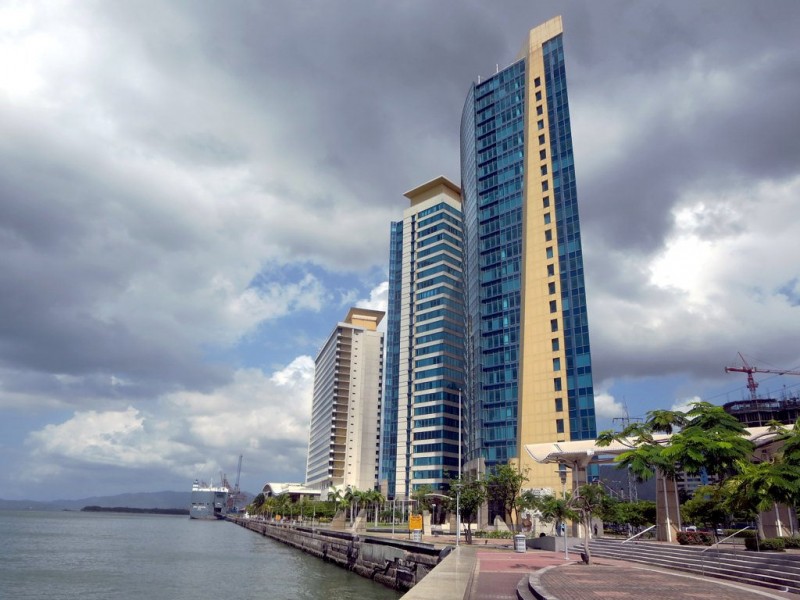 The Port of Spain International Waterfront Centre, which houses Trinidad and Tobago's Parliament. Photo by David Stanley, used under a CC BY 2.0 license.

In Trinidad and Tobago, there is a law under the Administration of Justice (Indictable Proceedings) Act — Section 34, to be precise — which the country's previous government tried to amend. The rationale for the change appeared logical on the face of it: to remove preliminary inquiries from the magistrates’ court level, where matters can linger for several years before being sent to trial.

Under the short-lived amendment, which was quickly repealed by the country's parliament on September 12, 2012, Section 34 would have made it possible for people whose cases have not been heard for 10 years or longer the right to have their pending matters dismissed. The exception to the rule was blood crimes — including treason, murder, drug dealing and ammunition trading — which had no sell-by date for conviction.

White collar criminals, however, could walk away scot-free — and this is what created the huge Section 34 scandal for the previous Kamla Persad-Bissessar administration. Two of her party‘s financiers, Ishwar Galbaransingh and Steve Ferguson, who are facing charges of money laundering and fraud over alleged bid rigging on contracts for construction of the Piarco International Airport, could have had all their charges dropped.

In fact, as soon as the law received final decree on August 31, 2012 — the anniversary of Trinidad and Tobago's 50th year of independence, when most of the country was distracted with celebrations — attorneys for the duo applied for a dismissal of the corruption charges. When the people, outraged, demanded accountability, the government deemed it an oversight.

Fast forward to the unanimous judgment of the Privy Council (the high court of appeal, based in the UK, that is used by many Commonwealth countries that follow the Westminster system of government) in the appeal of the two financiers, which was given on January 25, 2016. Its conclusion?

These appeals will be dismissed.

The state has won the judgment, which means that the criminal charges the appellants sought to avoid will now be reinstated, and their halted trials in Trinidad and Tobago will resume in the near future.

In an unsurprising response to the judgment, former Minister of Justice Herbert Volney, under whose watch the Section 34 fiasco took place and who was fired from his post over the controversy, said:

It is sad to hear our very highest court cast a blind eye to the outrageous and obscene status of our criminal list and the consequential injustice to hundreds of young men who languish for years upon years at the state prison deprived of liberty without trial. The Privy Council had the opportunity to stand on the principle of justice delayed is justice denied and demand meaning to be had for the axiomatic paradigm of the presumption of innocence. State indifference to closure in criminal causes should in the modern world carry a statutory sanction.

Instead, the Privy Council very tersely applied cold principles of law rather than vary them to the reality of the failed present day criminal justice system in Trinidad and Tobago in order to save a seemingly stillborn prosecution from an inevitable embarrassing end.

Volney even set the stage for Kamla Persad-Bissessar, who now holds the post of leader of the opposition, to claim vindication for her government:

Certainly the administration of Kamla Persad Bissessar has been exonerated from its share of blame by its correcting a parliamentary oversight hammered out in the wee hours of the morning in the Senate during a period of public emergency. At that time crimes of violence dominated the mindset of legislators.

Indeed, the website of the United National Congress, of which Persad-Bissessar is leader, published two press releases about the judgment, one of which states:

It is a clear vindication of the decision which was immediately taken to repeal section 34. The judgment highlights the swift action taken by the then government to convene the Parliament on an emergency basis to repeal a law that was unanimously passed with the support of all Members of Parliament with the noble intention of improving the system of criminal justice.

With respect to the recent ruling at the Privy Council, the simple outcome is that persons who are charged with criminal offences will be made to face a trial, despite all attempts to do otherwise.

This being the undisputed fact then, the public utterances of the Opposition Leader claiming vindication is insulting to the population.

I want to remind Mrs Persad-Bissessar that it is a Government which she led that produced legislation into which Section 34 was buried, with the intention of creating an opening for persons to avoid a trial.

If Kamla vindicated, the 20,000 people who marched against S34 are what?
‪#‎UNCDonkeyLogic‬

On Twitter, one reporter tried to clarify the finer points of the judgment, explained by the country's attorney general…

AG Al Rawi: The law had to be repealed so that the original intention of the law could be upheld @cnewslive

…while the news station he works for tweeted:

Commenting on the marches in the wake of #Section34 Al Rawi has described the ruling as a “victory for the people”. pic.twitter.com/X9aHJKzEiQ

The judgment is clear, well-reasoned and gives very precise reasons for the dismissal of the appeals.

Finally, in the midst of all the political spin being put forward, Twitter user Danielle Francois humourously tried to put things in perspective:

On the bright side – everyone has been vindicated EXCEPT Ish and Steve.. #section34