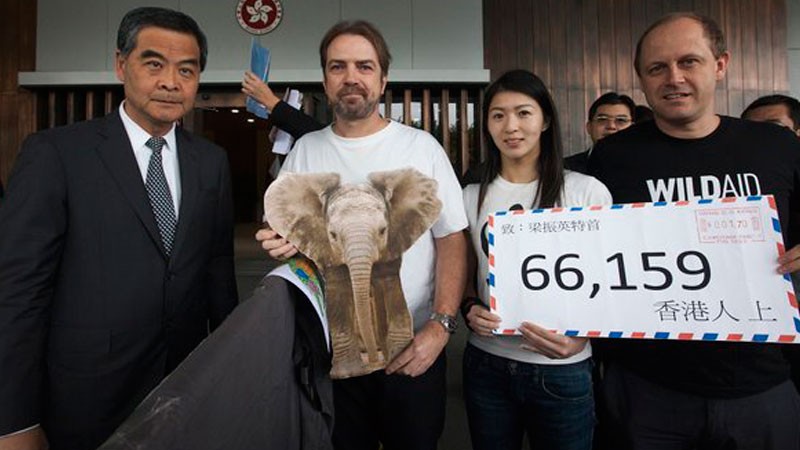 The authorities in Hong Kong have announced plans to impose a ban on the import and export of elephant hunting trophies, phasing out entirely the domestic ivory trade.

In 1990, following an international ban on the ivory trade, Hong Kong prohibited the import and export of ivory, though it continued to allow the licensed trade of ivory products domestically. In 2014, there were still 447 licensed shops and artisan workshops dealing in ivory.

In addition to the legal domestic trade, there is a huge black market for illegal ivory. In 2013 alone, the customs department seized 8,041 kilograms (more than 17,700 pounds) of smuggled ivory bound for Hong Kong. According to the Legislative Council's records, around 60 percent of the illegal ivory smuggled into Hong Kong ends up in mainland China. Some smuggled ivory also finds its way to the domestic retail market, where there is high demand for luxury items by mainland tourists.

Following China's announcement that it is committing to a near complete ban on ivory, Hong Kong Chief Executive Leung Chun Ying also included plans to kickstart legislative procedures to ban the import and export of elephant hunting trophies. He also indicated that the state will actively explore other appropriate measures to phase out the domestic ivory trade.

Given that Hong Kong's standing as the world’s largest retail market for ivory and has served as a hub for the illegal ivory trade into mainland China, many wildlife preservation groups are calling the government's new vow a breakthrough. WildAid is one of the organizations that have been very vocal in trying to make the ban on ivory trade a reality in Hong Kong. It celebrated the news:

Fantastic news out of Hong Kong today! Much work 2 do but a hopeful sign of things to come, via @wildaidHK https://t.co/03CSkZwTcW

Indeed, the government has much work to do to save the elephants. First, the resistance from the licensed ivory dealers is not easily exaggerated, and there are still fears that it could be too late for elephants, by the time concrete measures are introduced.

Their business will be extinct ANYWAY in a few year as there will be no more ivory, thanks to no more elephants…. https://t.co/X9FkwCYhNa

Second, Hong Kong's current laws offer many loopholes that sustain the city's status as the world's largest ivory trading center. In fact, many licensed shops are involved in illegal smuggling businesses, according to an undercover report released by WildAid three months ago:

The dealer in the video says state officials have no idea how to regulate the ivory trade and they don't pursue leads about the locations of ivory stockpiles.

The value of raw ivory in China reached an average wholesale price of USD 2,100 per kilo in 2014 and only dropped to USD 1,100 by November 2015. These numbers make the ivory black market a multi-million-dollar underground industry.

In 1990, the registered amount of stockpile in Hong Kong was 474 tons. By 2000, it shrank to 261 tons. However, since then, the decrease in local stockpiles has slowed, and in 2008 there were still 232 tons of registered ivory domestically.

According to media reports, Hong Kong's authorities have never implemented annual audits on the amount of registered ivory stockpiled by licensed shops or cross-checked their sales records. This is how illegally smuggled ivory finds its way relatively easily to store windows.

Thus far, the Hong Kong government has not put forward any concrete time-table on banning the domestic trade, wild life conservation groups are trying to draw attention to the policy, in hopes of making it harder to reverse in the future:

Fine by us! More people will learn HK will ban #ivory trade. The more people that know, the less chance of a U-turn! https://t.co/iVQfZXYWqd