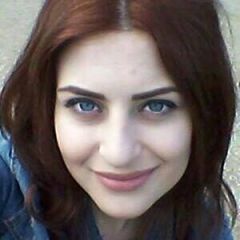 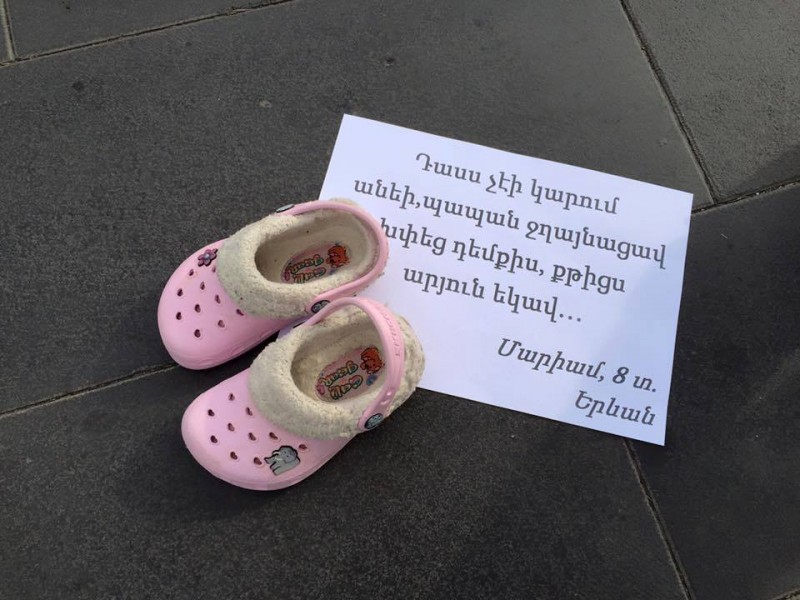 Image is from the Coalition to Stop Violence Against Women Facebook page. Photo taken at a public exhibition in Yerevan on October 1, 2015.

A few months ago, a pair of pink children's shoes and an attached sign appeared in Republic Square in Yerevan. It read, “I couldn't do my homework. Dad got angry. He hit me in my face. Blood dripped from my nose… [signed] Mariam, 8 years old, Yerevan”.

The display was part of a public exhibition organized by a group of activists to raise awareness about family violence in Armenia. Dozens of shoes were placed alongside stories of personal abuse, which nonprofits recorded from victims of violence against minors.

It is difficult to say how big a problem child abuse is in Armenia. Milena Abrahamyan, a journalist from Kvinna till Kvinna, notes that family violence is considered to be a private matter in Armenian society:

Working against domestic violence in Armenia is not easy, especially since many people do not even admit that it exists.

According to the Armenian children's rights commissioner's annual report in 2014, local police investigated only 10 cases of domestic violence against children. There are more than 819,000 children in Armenia. Commissioner Karen Andreasyan stated:

The problem is difficult to solve because violence cases are not voiced and further disclosed. Children rarely ask for help and violence exercised by parents is considered to be a normal approach to childrearing.

The laws of Armenia guarantee basic rights to children in its Family Code, Labor Code, and Criminal Code. As a member of the United Nations, the country has been following recommendations on protecting children through amendments to key domestic laws, trying to protect children better from exploitation, abuse, and trafficking.

Last year, Armenia was supposed to conclude an 11-year process to develop and endorse a comprehensive National Plan of Action for the Protection of Children’s Rights. Armenia's strategic plan includes promoting investigations of domestic violence cases, establishing hotlines in hospitals, police stations, and local governments, and psychological consultation in educational institutions, as well as public awareness campaigns and temporary accommodations for victims. A range of draft laws are still awaiting legislative debate, though the UN's agency for children, UNICEF, paints a grim picture of the child-protection laws in Armenia that have already passed.

However, despite these developments and the presence of political will, the implementation of laws still remains a problem as few working mechanisms have been established and resources, both human and financial, have been insufficient to translate provisions of laws into results for children.

Despite these obstacles, youth activists in Armenia are doing what they can, calling on society to reform its approach to childrearing, and demanding that the government take more active steps to protecting minors at risk. So far, that effort has focused on raising awareness about child abuse, one pair of pink shoes at a time.