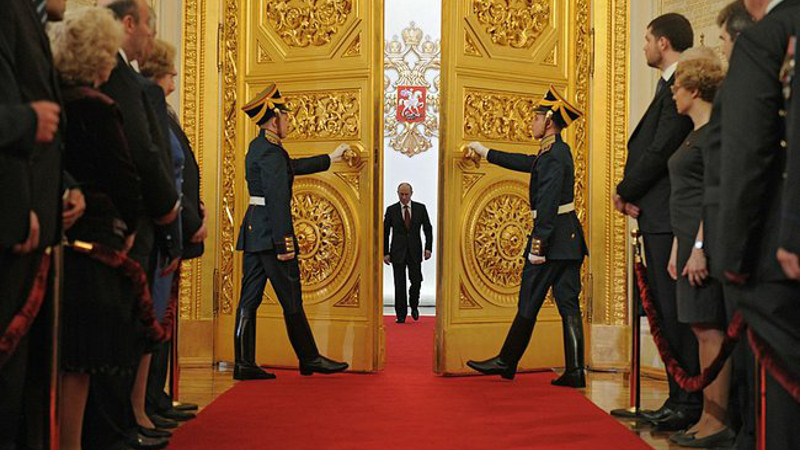 Doors open during Vladimir Putin's inauguration as President in May 2012. Image from kremlin.ru, CC BY 4.0.

This article by Andrei Jvirblis was originally published on openDemocracy Russia and is being republished as part of a partnership between RuNet Echo and openDemocracy.

As the response of Russia’s Prosecutor General to accusations of graft in December 2015 shows, nothing gets Russian public officials angrier than journalists rooting through sensitive financial information. In a letter published by Kommersant, Yury Chaika called the video by Aleksey Navalny’s Anti-Corruption Foundation (FBK) not only ‘baseless’ and ‘highly false,’ but the product of ‘orders from above.’ Indeed, Chaika went on to accuse Bill Browder, the billionaire-turned-human rights activist, of funding the 45-minute video as part of a conspiracy against Russia.

FBK’s latest investigation into top public officials and their circles is precisely the kind of work targeted by a new bill drafted by the FSB. This controversial initiative threatens the work of anti-corruption activists by limiting Russian citizens’ access to the Unified State Register of Property Rights and Transactions, Russia’s land registry.

The authorities are sending a message: transparency and access to state information exists only so far as it poses no threat to political stability. The idea of limiting citizens’ access to information is back on the table in Russia.

The 200-year-old idea of Russia’s ‘special path,’ a guiding principle for many, has also, in 2015, found fresh meaning in the development of open governance and the state’s discovery of ‘big data.’

In 2013, after membership of just over a year, Russia retracted its signature from the Declaration of the Open Government Partnership (OGP). Signatory countries recognise that the state should strive for openness: increasing access to information on the activities of state institutions for their citizens, stimulating public engagement in government and implementing policies of transparency and accountability—and all through state of the art technological means.

There was no official rejection of the partnership’s aims from Russian officials—there was just talk of reviewing the scale and form of Russia’s participation in the partnership, as well as developing its own ideas on this issue. That said, at the time of signing the declaration, and particularly after its withdrawal, various nationalist and pro-Kremlin media and blogsites were actively spreading the idea that the OGP was a channel of American influence and a limit on Russian sovereignty. Homegrown experts, unsurprisingly, welcomed the official change of heart.

As a result, Russia didn’t join the OGP, but the country’s own ‘Open Government’ organisation continues to operate. This structure was created at the time that Russia was planning to join the OGP, at the height of Dmitry Medvedev’s reign as president. Indeed, it was in the ‘Medvedev era’ that public discussion on state transparency and digital government emerged and Russia conducted its first experiments in the area, such as online public discussion of a draft bill on policing.

Pro-Kremlin media spread the idea that the OGP was a channel of American influence.

Three years after its creation, Open Government continues to operate, but it’s hard for the uninitiated to find out exactly what it is. The Open Government website states that it is a ‘system of mechanisms and principles that guarantee effective cooperation between state and society, as well as the quality and balance of decisions taken.’ Among the results of its work are ‘standards of openness for state institutions,’ a transparency rating system and a road map on developing open data, as well as a range of projects designed to open access to information about allocation of public funds and the activities of state companies (of which Russia has many). 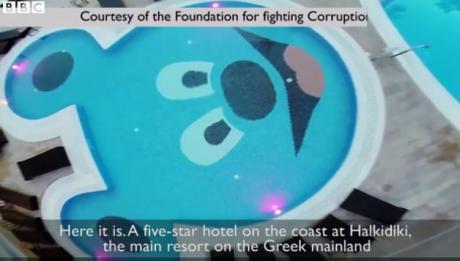 Open Government is a rival of Russia’s Civic Chamber, which was set up in 2005 with the aim of improving cooperation between state and civil society. With 126 members, the Civic Chamber hosts something of an all-star cast of Russian civil society. Today, these two structures compete for the renewal and control of the system of public councils attached to government bodies. (These councils were also created under Medvedev, but the majority of them turned out to be a complete farce—most of the time they didn’t even hold meetings, let alone carry out any substantial work).

How well is it working?

Both the Civic Chamber and the Open Government initiative are trying to create an effective model of cooperation between the public and the state, using open data and digital democracy. From the outside, both organisations seem to have a broad mandate for this project and significant resources. But how successful are they?

The first open online discussion of state initiatives was piloted on the draft police bill in 2010. A special site with the draft text was set up, and all you had to do was register. This approach and the visibility of the subject to be discussed—the trigger for police reform was the shooting of three people by a senior police officer in a Moscow supermarket in 2009—drew a lot of people in.

But many of them were unhappy with what came next: media discussions were censored, and the dialogue with experts wasn’t properly organized. The government evidently didn’t like the results either: the user polls following the discussion soon led with rather radical proposals, which had to be written into law—for instance, a mandatory badge to be worn by police officers when in public.

This kind of discussion continued for other legislative initiatives until the idea tailed off when Putin returned to the Kremlin in 2012. But Russian law does not permit the authorities to refuse a public discussion, and its relocation to the internet—well, that’s just progress.

The result has been the development of a number of specific legal instruments to resolve different issues. For example, the government’s portal for the publishing and discussion of regulatory documents contains drafts of serious documents being compiled by different regulatory bodies. But the portal can’t boast about the hits it receives: even the most popular subjects only score a hundred or so views and a couple of comments. The reasons are clear: the complexity of the subjects is exacerbated by the authorization system, which requires people to enter their National Insurance numbers and sign up to an Electronic State Services account.

A ‘citizen bill’ needs 100,000 signatures to get past the first stage.

There is a similarly complex identification system for accessing the ‘Russian Public Initiative’ portal, which publishes details of citizen initiatives and drafts of legislation proposed by users. The advantage of this site is the simplicity of its content (proposals are often reminiscent of those on the petition platform Change.org), but for a federal level draft bill to pass this initial stage it needs to collect 100,000 signatures in the space of a year, which is a serious challenge. So far only one proposal has got that far: opposition politician Aleksey Navalny’s bill on the ratification by Russia of 20 UN anti-corruption (‘unlawful enrichment’) articles. The second stage of the process involves an ‘expert commission’ of the Open Government Partnership, but in this case it voted against the initiative.

Open Government is, however, forging ahead in Moscow. Muscovites proposed the creation of a democratic instrument of their own: the Active Citizen project, a website and mobile phone app where people could discuss the future development of the capital. In practice, this means users taking decisions on small questions (the colour of floral borders, for instance) or approving decisions taken by the city authorities (such as speed limits in the city centre).

Active Citizen, however, suffers from the same flaw as previous popular platforms: its inability to verify users’ identity. On the other hand, this very flaw allows it to create the illusion of mass involvement and claim to engage the public in debate about government decision making. The site has more than a million registered users, and the city authorities have already begun to use it to create public discussion of planning decisions. This is a small opportunity for Muscovites to influence the development of their city’s infrastructure, but it is the only one available and at this stage it does give dissatisfied groups of residents the maximum chance to challenge arbitrary official decisions.

‘Active Citizen’ is only one element of the city's electronic management system introduced by Moscow mayor Sergey Sobyanin and his team, who have been running the capital since 2012. The system is an increasingly effective response to the dissatisfaction many Muscovites have with the city and federal authorities—it was Moscow that saw the largest protest rallies in the winter of 2011-12. Many Muscovites are also clued into global issues and the capital has the resources to put systems like this into place.

The city authorities are also copying many public initiatives, scaling them up as they go. The popular service for lodging complaints about communal and government services, for example, draws on the experience of an existing mapping service, both in terms of discovering problem areas in a given district and in emergency situations.

An important element of an electronic state is open access to information, which takes place in Moscow through a special portal with datasets. Nevertheless, despite its huge database, the information it provides falls short in many areas of social significance. For example, neither it nor other information resources carry essential information about the work of the law enforcement agencies or crime rates.

Transparency on a leash

The Russian government has successfully assimilated the basic elements of electronic democracy and public engagement in government and rolled it out across the country, but it uses them only when it can ensure it has control over the processes it has initiated. The situation is much the same with big data: it remains accessible only so long as it doesn’t discredit the state machine, or uncover the corruption and incompetence of the individuals who run it.

This article by Andrei Jvirblis was originally published on openDemocracy Russia and is being republished as part of a partnership between RuNet Echo and openDemocracy.