Meet Luisa Revilla, the First Transgender Woman to Make It Into Peruvian Politics 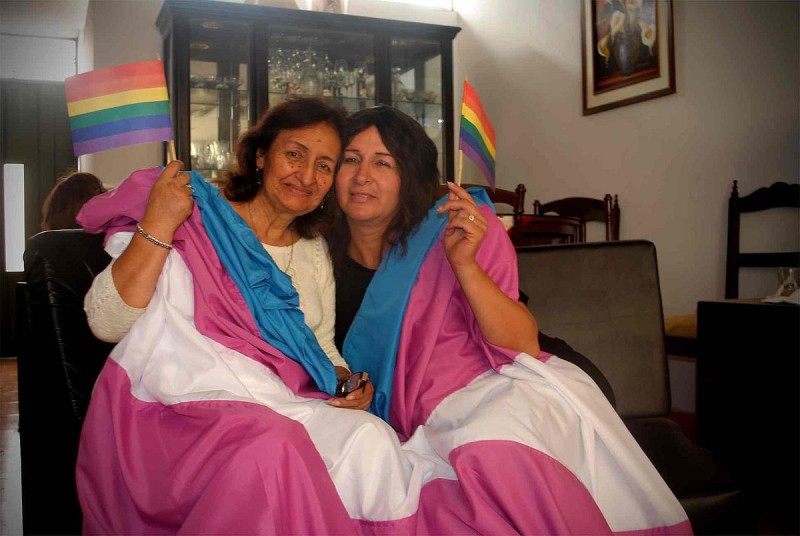 This article was originally written by Héctor Lozano González and published by Tea After Twelve. It has now been republished and adapted for Global Voices under a republication agreement and with permission.

I heard her name for the first time in an interview on national television after she had just won the municipal elections: Luisa Revilla, Peru’s first transgender politician. It was a unique piece of news, to say the least, at a time when the civil rights of homosexuals in Peru was a topic of constant debate in congress. Luisa Revilla, however, was busy conquering her first political role as councillor in the municipality of La Esperanza, a district on the outskirts of Peru’s second-largest metropolis Trujillo. I called her and asked if I could see her for an interview.

The neighbourhood Luisa [has been working in] is one of the informal settlements at the edges of the city. In search of affordable living space, more and more people are occupying undeveloped areas on the mountain slopes surrounding the city. These places have become new neighborhoods, but they are located beyond the reach of the existing city infrastructure and lack roads and a reliable supply of water and electricity. Bringing these basic services to these marginalized areas is currently one of Luisa’s main political concerns.

The home that she craved as a child

Luisa receives me in her home, a house that she has poured her heart into building in an area where there was nothing more than sand and a couple of shacks made of sticks and cloth. Today it is complete, and to her represents home she craved as a child. Downstairs you will find her video game business, which she has maintained for the last fifteen years. Luisa was able to realize this dream after receiving a generous sum of money for working alongside a North American friend for two years. It was this friend who urged Luisa to live life the way she felt she was meant to: as a woman.

After having been abandoned by her father as a child, Luisa and her mother were forced to live what she can only describe as a “gypsy” lifestyle: “We moved from one place to another, looking for homes where we could take care of ourselves in spite of the poverty,” she recalls.

“I felt sad that I did not have a ‘traditional’ family; with someone to defend me against the abuse and atrocities directed against me on account of my sexual orientation during my childhood, adolescence, and youth. I was a sex worker in Lima at the age of sixteen…”

“You turned to prostitution?” I inquire.

“What is the difference between ‘sex work’ and prostitution?”

“It is the same, only it sounds more elegant to say ‘sex work’,” she explains, laughing at the clarification. “It was because lack of guidance at home. I really admired the girls who engaged in this. You learn to survive. You learn that both good and bad people exist. But I realized that this world was not for me. It was horrible… horrible. It was the lowest I have ever sunk. I felt dirty, filthy, and unworthy. I listened to my heart and returned to Trujillo, where I entered the seminary of the Catholic missionary congregation of the Redemptorist Brothers.”

Becoming a politician: “Here I am!”

At the age of 44, Luisa, born Luis Alfredo Revilla Urcia, had to modify her mode of dress and manner of speaking depending on where she was headed during the electoral campaign. In spite of this, after more than 200 days in office, it is obvious that her entrance into politics was neither an accident nor a stunt to provoke controversy. She is currently the general secretary to the Mayor, a municipal councilor, and task manager for JUVES, a neighborhood council that aims to improve the security situation in the community.

Elidio Espinoza, the mayor of Trujillo and the one who asked Luisa to run as councillor, recalls the day he asked her to join him:

“It was the day when the district committees of La Esperanza were to take their oath.” At this event, every political party presents its working group for the upcoming elections. All too often though, the representatives of smaller parties are threatened by the members of the more powerful political groups. That’s what happened to Elidio Espinoza’s supporters: “Many of those summoned found themselves deterred by pressure from our political adversaries.” Only three participants attended, including Luisa. “As soon as I saw her, I offered her the opportunity to join the party and to occupy one of the leadership positions. Without a second thought, she responded to the offer with enthusiasm: ‘Here I am!’”

A politician committed to the people

At the back of her office space, I see a set of wigs in various colors. I had initially assumed her hair was naturally long, but now I see I was wrong. Luisa is a tall, robust woman. She is wearing a baseball cap and a black, sporty outfit; not the usual attire for a councillor.

“I don’t like to be in the office,” she explains as we leave it to continue our walk around La Esperanza. “I like fieldwork, the action, the contact with people; there are many things to do.” As she gives me a tour of her district, I can see the impact of her work and of her personal presence: People recognize her, listen to her, and are willing to solve any problems they see. At the city’s construction sites, it is obvious that they are really working every day to create roads to give people access to water, electricity, and public transportation. They are building an athletic and recreational space, a market and a school. A highway will not only bring cars, but development.

Luisa has made history. She is unwittingly part of a group of transgender women who are taking on roles in a media cabinet and occupying political offices in Latin America. The first was Zuliana Araya Gutiérrez, formerly Enrique, who became the first transgender councilor in Valparaiso, Chile in 2012. In the same year, a Cuban named Adela (formerly José Agustín Hernández) succeeded in becoming the municipal delegate for the “Popular Power” party in her native city Caibarién.

These three women show that sexual orientation or gender roles do not affect nor diminish their roles. On the contrary: It is clear that they connect perfectly with the neediest of populations in their respective jurisdictions. If we view this as a phenomenon of social vindication for the LGBT community, it would not be surprising if a fourth member soon joined this list of pioneers. It is widely known that Tamara Adrián, a lawyer by profession, might be running for the National Assembly of Venezuela this year, 2015, for example. [Update: Tamara Adrián won a seat in the Assembly in those elections]

“What do you think about the bill supporting civil unions between same-sex partners in our country?” I ask Luisa.

“I think that I must support the proposal because I am a member of these minorities. However, I do not think that it is essential.”

Her answer surprises me. “Why do you not consider it important?”

“For me, the real victory will be the day that my identification card recognizes me as a woman. Luisa instead of Luis.”

“Have you ever had an operation of any kind?”

“No… I am a woman in the body of a man, but I will not undergo surgery. I like my body. Everything you see is natural and I would never mutilate myself. I do not need a sex reassignment to know that I am a woman. I feel like a woman and think like a woman.”

The day Luisa took her oath to become councillor at a public event, she presented herself as male, though immediately clarified publicly that she would be recognized as a woman, swearing by the policies of tolerance and non-discrimination.

She continues in this vein today, working as a transgender woman for the rights of everyone in her district to be accepted as they are.

This article was originally written by Héctor Lozano González and published by Tea After Twelve. It has now been republished and adapted for Global Voices under a republication agreement and with permission.