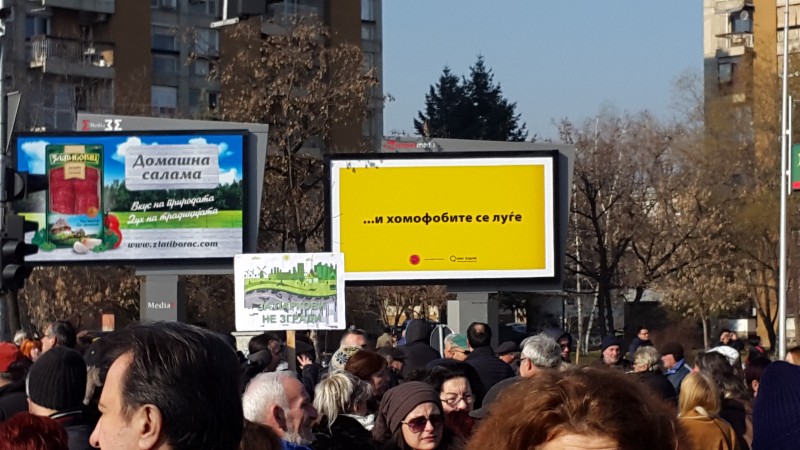 As a way to tackle endemic homophobia, Macedonian NGO Coalition ‘Sexual and Health Rights of Marginalized Communities’ [2] posted a number of billboards in the cities of Skopje, Bitola, Kumanovo and Štip with the simple message “…Homophobes Are People Too,” as part of a campaign [3] that started on December 10, or Human Rights Day.

The idea [4] behind the billboards, according to the coalition, is to characterize those who oppose LGBT rights as “in need of social assistance” to overcome their own prejudices, especially in light of the institutional hatred for sexual minorities in the country.

Over the last 10 years, Macedonia's ruling party [5] has stirred homophobic sentiments as a way to divert public attention from political and economic failures. For instance, while there's never been a high-profile movement in favor of legalizing same-sex marriage in the country, the party has nevertheless issued statements throughout its time in government presenting itself as “defenders of traditional morality”. At the same time, there is systemic impunity [6] for hate crimes against LGBT people [7] in Macedonia.

Out of hundreds of media outlets operating in the country, only seven independent web portals [8] reported about the billboard campaign, which were made in cooperation with Croatian NGO Queer Zagreb. Therefore it's not surprising that most social media comments about the campaign seem to be negative [9].

The latest EU report on Macedonia [10] (page 60) highlighted the grave situation in regards to human rights of LGBT people:

Lesbian, gay, bisexual, transgender and intersex (LGBTI) persons continue to suffer discrimination and homophobic media content, both online and offline. A sixth violent attack occurred during the celebration of the second anniversary of the LGBTI support centre, leaving two people injured. Despite calls by civil society organisations and the international community for the perpetrators to be prosecuted, none of the attacks has yet been fully investigated. In August parliament rejected a draft amendment to the anti-discrimination legislation, which would have prohibited any form of direct or indirect discrimination on the grounds of sexual orientation and gender identity. Considerable efforts are still needed to raise awareness of and respect for diversity within society and to counter intolerance. This needs to be done through public campaigns and training of law enforcement bodies, prosecutors, judges and health workers.

A video [11] released after the New Year by a local TV station from the city of Štip [12] illustrates this homophobia. The clip, part of the “Best gaffes of 2015″ series, depicts a street survey, with the reporter asking people, “What would you do if you find out that your neighbor is a Homo sapiens?”

Those surveyed seemed to confuse the scientific name for human beings [13] for the word homosexual, with the first respondent quipping, “I would hang him.”

The second citizens explains, “What would I do? I would do nothing. I would either kill him, or allow him to kill me. Nothing else.”

Another interviewee first laughs, and then says, “If I were president, hah… You can move out, you can beat him, you can sue him, report him to the police. The police should pick him up. I see now these people are not afraid of the police or the court, I see them on TV…”