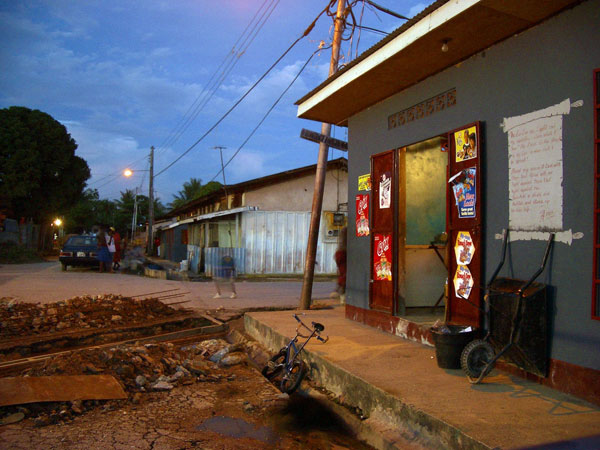 Hell Yard (Laventille, Trinidad). The area is “one of the most depressed areas of Trinidad and Tobago's capital city and the quality of life here is not to be trivialized”. Photo by C*POP, via Georgia Popplewell, used under a CC BY-NC-ND 2.0 license.

On January 22, two Trinidadian schoolboys — 17-year-old Deneilson Smith and 15-year-old Mark Richards — were on their way home when they were pulled out of the taxi they were travelling in and shot dead by gunmen. No further details about the motive for the murder have been forthcoming, although residents of the area believe that the boys were killed “out of spite” in an ongoing turf war between rival gangs.

This has not stopped social media users from jumping to their own conclusions, mostly based on the fact that the boys were from Laventille, one of the country's most economically disadvantaged communities. Once hailed as the birthplace of creativity and innovation, the area has now been stigmatised as a “hotspot” for violent crime and gang warfare.

The first misstep was made by mainstream media — one of the country's daily newspapers went the route of sensationalism when it plastered photos of the boys’ lifeless bodies on the front page, while another led with the headline, ‘Executed’. This struck a sour note with many netizens — Facebook user Rhoda Bharath was blunt:

Why is the body of a 17 yr old boy on the front page of a newspaper?

Even the headline is wrong. This is not the headline that should accompany this. Where is the shock? The compassion? The call for action?

Haven't seen the other front pages of other newspapers but Newsday editor, how would you feel if those were your kids lying dead, laid out on the front page for you and everyone else to see?

The electronic media's coverage that evening turned out to be more of the same. On Facebook, Patricia Worrell asked:

What must it be like to see your son's body sprawled in the street?
Again and again, with each news broadcast…

‘This wonderful nation of ostriches’

Many assumed that the boys were killed because they were involved in some nefarious activity, even though both the students’ families and the police have denied this. The race-based politics in which the country has been mired for quite some time came to the fore, with many Indo-Trinidadians rejoicing at the deaths of the two Afro-Trinidadian students. Netizens soon came to the boys’ defence — including Indo-Trinidadian Darrel Dookoo, who posted this video to Facebook, in which he said:

My heart goes out to the parents of these two children. I don't want to know the story if they in gang, if they what, if they is bandit…my concern is two children died and I know the family hurting.

He also slammed the previous administration, making the point that “not one East Indian who have some say in this country […] ever made one statement distancing themselves from the racialism”.

The blatant outright Hate has been allowed to flourish because we've stood by with heads buried deep.
This wonderful nation of ostriches.
What you allow will continue…

Attorney and Global Voices author Jason Nathu tried to change the discourse by relating his own experience with the student body at the Success Laventille Secondary School, which the two teens attended:

I'm so saddened at the death of the two students at the Success Laventille School this week. I'm also disgusted by the insensitive and unfortunate comments that have emanated from the incident.
I am fortunate to have had the experience of visiting the school last term and sending HWLS [Hugh Wooding Law School] students there for several consecutive weeks to speak with the pupils about bullying and the legal consequences of their actions. What struck me was how appreciative the young pupils were that lawyers or law students actually took the time to visit their school and invest time in them. They were happy to learn about the legal system and were genuinely interested in making good decisions and doing the right thing.
It was a humbling experience to be taken to the school in the back of a police vehicle on each occasion.
I can say definitively that we met some natural leaders among the student population at the school and I hope that they will not be affected adversely by the negative comments and stereotypes being perpetrated by the society towards them.

The Secondary Schools’ Cricket League Facebook page posted a photo of one of the victims, Deneilson Smith, saying:

[He] was an exemplary student of the Success Lavantille Secondary School as he excelled as a student and cricketer. He served as Captain of the School's cricket team where he displayed true character and leadership. He was a very talented young man who had a life of success ahead of him. It saddens us to know that De-neil was one of two boys who were shot and killed yesterday. We would like to express our deepest condolences to his Parents, family and friends through this trying time. MAY HIS SOUL REST IN PEACE.

Kezia Stewart, one of Smith's classmates, posted a Flipagram tribute, while one of the slain teen's friends, Tisha Jay, said:

Meet #Denilson #Smith many folks love to label a person because of the area they live in without knowing their story this lad here was a #TTPS [Trinidad and Tobago Police Service] child an active member of our Youth club who wanted to be a Pilot an had successfully completed an Aviation course during the July/August vacation last year but had his life taken by wannabe Gangsta's ….#RIP

‘Safe havens for the godfathers of crime’

The minister of parliament for Laventille West, the constituency in which the boys lived, went with several of his colleagues to pay their respects to the families, while the country's prime minister, Dr. Keith Rowley, called a press conference to announce new security initiatives that the government would be introducing.

Rowley said that criminals were growing bolder as a result of their belief that “the response by the law-abiding majority will not see justice being served.” Consequently, the government has decided to have the country's defence force “operate virtually permanently” as “a support to the police service in maintaining law and order”.

This approach attracted some criticism from the satirical website Wired868, which posted a make-believe exchange based on the fact that Rowley had criticised a similar crime-fighting approach by the last government. In another post on Wired868, Sunity Maharaj took issue with the prime minister's criticism of crime-riddled communities, saying that “we are living the logical outcome of over 50 years of policy failures”:

Thanks to years of multi-million dollar state contracts, private sector protection money, and unholy liaisons with the protective services, ordinary hustlers have been transformed into major league gang leaders with communities so entirely under their control that they only putatively belong to the republic of Trinidad and Tobago. […]

It will take a lot more than the police and army to free people from the psychology of fear and distrust which has created safe havens for the godfathers of crime.

Autopsies on the children have confirmed that they were shot more than 25 times. Four suspects have since been held for the double murder.