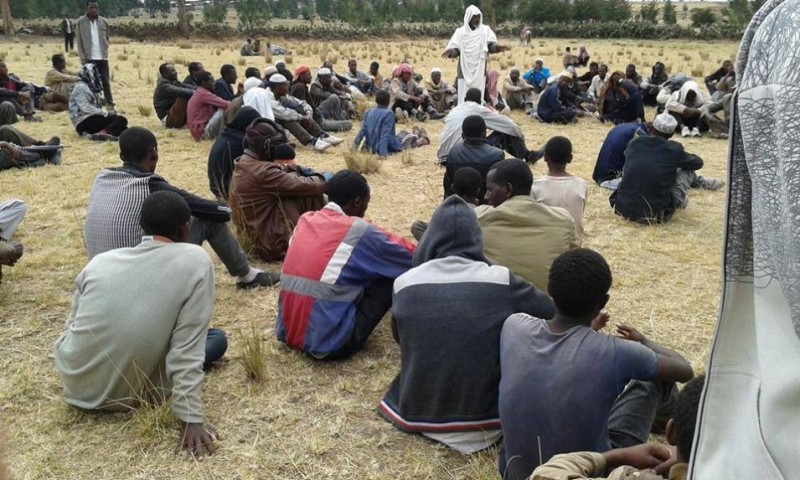 Burial of Nasrudin Mohammed, a protester killed in December 2015. Photograph by Gadaa.com.

Ethiopian authorities have killed at least 17 children and injured many more involved in peaceful land rights protests since December 2015.

Demonstrations over a plan to expand the capital into the ethnic region of Oromia began in Ethiopia in late November. Since then, there have been 140 confirmed deaths of protesters at the hands of government authorities. Of the 17 minors killed by authorities, most were between the ages of 12 and 17 years old. Citizen media reports also show that many more school children have been injured in the protest movement.

The protesters are speaking out against the so-called “Master Plan” to expand the capital city, Addis Ababa, into Oromia, fearing that the proposed development will result in direct persecution of the Oromo ethnic group, including mass evictions of Oromo farmers from their land. Oromo people, who represent the largest ethnic group in Ethiopia, have experienced systematic marginalization and persecution over the last quarter century. Some estimates put the number of Oromo political prisoners in Ethiopia at 20,000 as of March 2014. The country's ruling elite, of the EPRDF party, are mostly from the Tigray (only 6% of Ethiopia’s 90 million population ) region, which is located in the northern part of the country.

In parallel with efforts of global organizations such as Human Rights Watch, local activists have worked to document and preserve evidence of these killings since early December. Last week, Ethiopian media scholar Endalk Chala and Oromo activist Abiy Atomssa published a map of confirmed deaths based on a crowdsourced data set comprised of reports from citizens, activists, social media, local media networks and VOA’s Amharic service.

Eighth grader Barihun Shibiru of West Shawa was among a handful of minors who were arrested and executed once in official custody. Shibiru’s funeral was held on December 17.

Citizen videos have also helped document and confirm deaths of minors, including a video that shows students crowding around the body of Lucha Gamachu, a 9th grader at Burqa Wanjo Secondary School. The video was published on Facebook by Jawar Mohammed.

We ask that any person who has evidence of the death or disappearance of protesters please contact us at editor@globalvoicesonline.org.

This article is part of our special coverage series on the Oromo protests in Ethiopia. Learn more about the protests here.