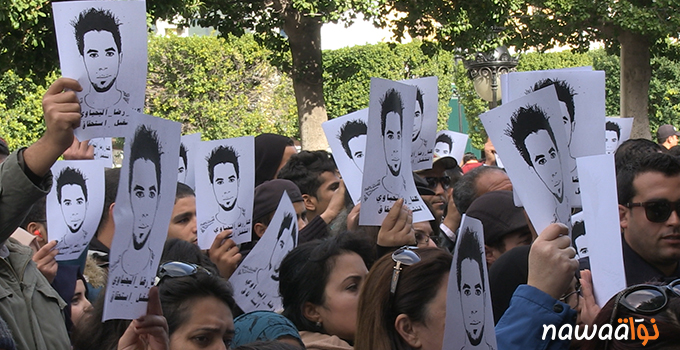 Protesters in the capital Tunis holding portraits of Ridha Yahyaoui. Photo by Nawaat.org

Five years after the protests that brought down the 23-year rule of dictator Zine el Abidine Ben Ali, Tunisians are once again taking to the streets demanding “jobs, freedom and dignity”.

Protests erupted last Sunday in the impoverished province of Kasserine, central west of Tunisia, after a young unemployed man was electrocuted when he climbed a pylon to protest being denied a government job. Protests have then spread to other regions across the country. On Saturday, peaceful demonstrations continued in the provinces of Kasserine and Sidi Bouzid, the very same town that had sparked the Tunisian revolution five years ago.

How did the protests start?

Protests erupted on 17 January in Kasserine, around 300 km from the capital Tunis, following the death of 28-year-old Ridha Yahyaoui. On 16 January, Yahyaoui learnt that he has been denied a government job. His family told the collective blog Nawaat that he sought to meet the local governor to express his dismay, but was not allowed to meet him. He then climbed a pylon and was electrocuted, sparking protests in Kasserine and other regions across the country. It is not clear whether he climbed the pylon to commit suicide or to merely protest his job rejection.

Kasserine is one of the poorest provinces of the country, with an unemployment rate of 26.2 per cent, and a poverty rate nearing the 30 per cent, according to 2012 government statistics.

In a series of tweets, NGO worker Nessryne Jelalia describes the difficult situation there:

I have been working in Kasserine over years now, one of the major problems: the behavior of decisions-makers with the people, their disregard for the poor and their arrogance

It is only in Kasserine that I have seen children with motor regression (they can no longer walk) due to malnourishment.

Unemployment exists everywhere in Tunisia, with a rate of 15%, but why is it 10% higher in Kasserine? Why is life expectancy at birth 7 years lower in Kasserine than in the capital?

Where are the protests taking place?

Though the protests started in Kasserine, they have quickly spread to other regions, including Sidi Bouzid, where in late 2010 street vendor Mohamed Bouaziz set himself on fire, sparking anti-government protests that led to the toppling of the Ben Ali regime and the events of the so-called Arab Spring. As of 21 January, protests spread to 16 governorates, according to a map by Nawaat.org. In the capital, Tunis, a number of solidarity marches and protests were held outside the workers’ union and on the main Habib Bourguiba avenue.

Protests spread to 16 different provinces across Tunisia. Map by Nawaat.org

What are the protesters’ demands?

The protesters are demanding jobs, development and positive discrimination in favor of marginalized and impoverished regions like Kasserine. After the 2011 protests, successive governments have been unable to adequately address regional disparities. Though jobs and development have been promised, these promises have not materialized and those living in inland regions are often told to be patient.

The people are not only protesting for jobs, but also for dignity and against clientelism just like in Sidi Bouzid in 2010.

How did the government respond?

The government has as usual responded with promises and accusations. A government spokesperson said 5,000 new jobs would be created in Kasserine in response to the protests. However, protesters have dismissed these promises. One protester in Kasserine told MiddleEast Eye:

This is only a cosmetic solution that has no basis in reality,” he said. “If you employ 5,000 men from Kasserine, then 5,000 more from Baja will rise up. They have the right to employment. It’s the same case with Sidi Bouzid.

Speaking to France24, Prime Minister Habib Essid said that his government does not have a magic wand to address the country's economic problems adding:

What is happening in Tunisia with the youth is not new. We inherited this situation… We need people to be patient.

We know that you do not have a magic wand …
But you did not show the will to improve the situation.You did not listen to the youth …You have been indifferent to the people needs and claims …
Corruption, nepotism, repression, misuse of power are everywhere …

Addressing the nation on January 22, President Beji Caid Essebsi said these protests are “natural”, and “there is not dignity without work”, before blaming “ill-intentioned hands of inflaming the situation”.

A police officer was killed in the clashes and dozens of protesters have been injured.

Acts of vandalism and looting were also registered, prompting the government to impose a night curfew as of 22 January. Protesters, however, have distanced themselves from these acts.

In a statement published on 21 January, the spokesperson for a group of protesters in Kasserine staging a sit-in at the headquarters of the local governorate said:

we insist on carrying on our peaceful struggle for our legitimate rights until our demands are met. We also reject all forms of violence, and we are innocent of any attacks on public facilities.

These protests have similarities with the protests that brought down the Ben Ali rule in 2011. Both started from an impoverished and inland region, and were sparked by an act of desperation. In 2010, protests erupted after Bouazizi set himself on fire when local police confiscated his scales and merchandise. In addition, the demands and slogans are the same: “jobs, freedom and dignity”.

However, it is still too early to predict what the aftermath of these protests will be. Besides, for a number of Tunisian protesters and netizens, this is not a “revolution 2.0″, this is the same revolution that began five years ago.

It was an unfinished revolution … #Tunisia

I understand people in #Tunisia are saying: ‘This is not the second uprising. The first one never died.’ #kasserine #5years