Three Foreign Lawyers Have Returned Home Safely, But What’s Life Like for Local Attorneys in Tajikistan? 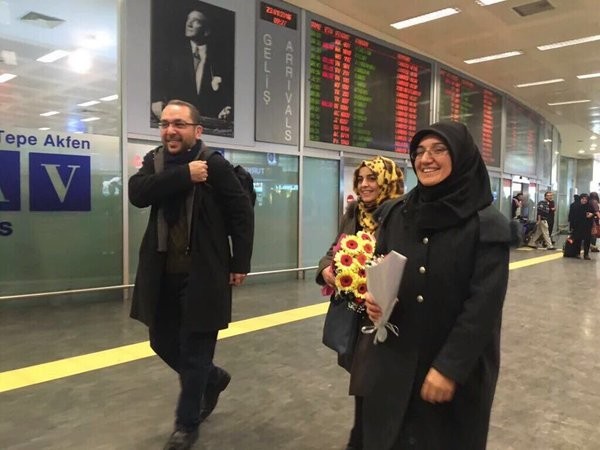 Tajikistani authorities have released three lawyers (one from Russia and two from Turkey) after briefly detaining them in the capital city of Dushanbe, where the three tried to meet with arrested leaders of the banned Islamic Revival Party of Tajikistan (IRPT), the party's arrested lawyers, and the family members of arrested lawyers.

Last fall, two prominent Tajik lawyers were arrested after they launched a defense campaign for the arrested leaders of the IRPT, which is banned in the country.

We are In Istanbul. Let Allah be happy with you all. Let Allah help all Muslims who are struggling in Tajikistan.

Her Russian colleague, Dagir Khasavov, wasted no time informing his followers on Facebook—who had been talking about picketting Tajikistan's consulate in Moscow—that he is safe.

Dear friends and brothers, I have just landed in Domodedovo airport. I've made it back to Moscow. The flight was postponed for an hour and I was the last one who got into his seat on the plane after resolving the issue. I am a lawyer and did not break any Tajikistan law; it just was an attempt to break my desire to continue the work I started in helping my Tajik colleagues. Soon we will conduct a press conference in Istanbul and inform the world media and human rights organizations about the details of this trip. Thanks to everyone who was concerned about my detention and thanks to Allah, everything ended happily.

Held over a request to meet detainees?

Khasavov, Sonmez, and Emine Yildirim arrived in Dushanbe on January 20 hoping to meet with arrested leaders of the IRPT, their lawyers, and their family members. The government banned the IRPT and arrested its leaders after deadly clashes in the capital Dushanbe and nearby districts in September 2015, when the group was accused of organizing a coup.

It's unknown how many people from the IRPT have been arrested, and oppositionists say those now behind bars are being tortured and denied access to lawyers. Two prominent local lawyers who agreed to defend IRPT leaders quickly found themselves in prison, too, on charges of financial crimes.

Khasavov, Sonmez, and Yildirim intended to discuss the fate of the detainees with Tajikistani officials. On January 22, they managed to visit the Prosecutor General's Office, but were unable to meet with other officials. Khosiyat and Jamshed Yorovs, two siblings of arrested IRPT lawyer Buzurgmehr Yorov who are also attorneys, disappeared after welcoming the foreign lawyers. Soon afterwards, the foreign guests faced trouble, as well.

You can't just up and grab a citizen of the Russian Federation like this. By detaining the well-known Russian lawyer Dagir Khasavov, the Tajikistani government discredits itself as a state governed by the rule of law.

Meanwhile, in Tajikistan, a police spokesperson denied that the three lawyers had encountered any trouble in the country. Jaloliddin Sadriddin told Tajik Service of RFE/RL:

It means these lawyers just wanted to cause a sensation with their trip. They created this lie just to make headlines.

A dangerous place for lawyers?

Khasavov, Sonmez, and Yildirim are the first foreign lawyers to have experienced such direct attention from police in Tajikistan. Local attorneys have fare far worse when daring to defend suspects in high-profile, politically contentious cases. For instance, two of the three lawyers who defended New Tajikistan Party leader Zaid Saidov are now in prison. Officials arrested one of the third lawyer's sons, apparently to pressure the boy's father into backing down.

Two IRPT lawyers have also been arrested, along with a woman locally famous for acting at an attorney for the IRPT. The United States Commission on International Religious Freedoms wrote that Zarafo Rahmoni has been “severely abused and threatened to commit suicide” during her ongoing detention.

This disturbing chronology of lawyers’ arrest in Tajikistan has emerged in the last few years. Local attorneys face risks working political cases. Unlike foreigners, they generally can't leave the country, and so they're vulnerable to being sent to prison or subjected to worse. It's not uncommon for these individuals simply to go missing. Buzurgmehr Yorov’s siblings, who disappeared just before meeting with the foreign lawyers, are lucky: they re-appeared after Khasavov, Sonmez, and Yildirim left the country. A local activist wrote on his Facebook account:

Good news from Dushanbe. Khosiyat and her brother have been freed.