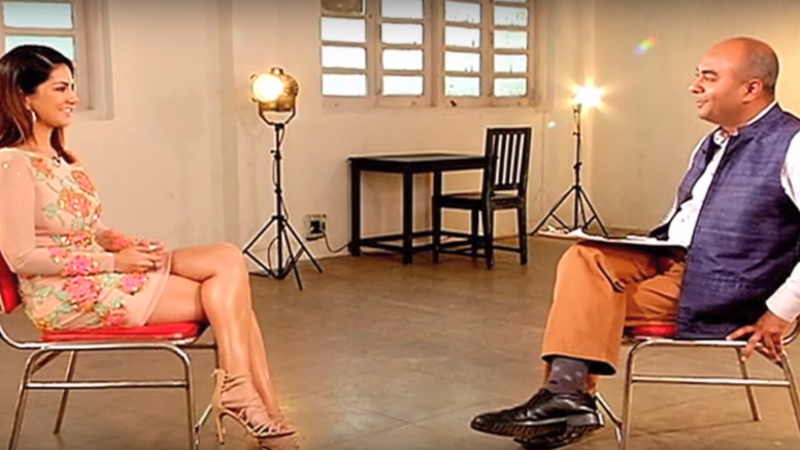 When the Bollywood star agreed to be interviewed by Bhupendra Chaubey, a journalist with the Indian TV channel CNN-IBN, who approached the conversation with the expression of mock seriousness and a little defiance on his face, little did she realize it would raise a series of questions about Chaubey's journalistic ethics.

Journalist Chaubey proved he is no exception. During the interview, which aired on Indian television on January 15, 2016, Chaubey asked Leone a string of uncomfortable questions — which often had a misogynistic ring to them — revolving around the actor’s former involvement in the adult entertainment industry.

He began by saying, “Tell me one thing you regret.” When this could not make Leone express remorse about her past, Chaubey kept bringing it up, almost like an interrogation. Several other questions in the same moralistic vein were raised by the journalist, who came across to many viewers to be a little too judgmental for his job. Chaubey even made this sweeping statement: “There are some who believe that if Sunny Leone is becoming a brand ambassador of sorts for this new India, then it is a very dangerous trend to have.”

Leone maintained a brave face throughout the interview, answering every uncomfortable question with disarming humility. She made it clear, both to the journalist and to the audience, that she did not see herself as the victim of her past. “I don’t have any horror stories, I wasn’t abused, I wasn’t beaten, I wasn’t molested, and I wasn’t raped.” She was happy to acknowledge that every situation has had a role in brining her to her successful present.

It wasn't long before the interview went viral. Many Twitter users came out in strong defense of Leone, criticizing Chaubey's journalistic ethics and calling him out on his blatant sexism and the puritanical manner in which he conducted the interview.

As a broadcaster and as a viewer, I'm depressed and disgusted by the behaviour of a senior journalist like Bhupendra Chaubey #SayYoureSorry

Always cared about you @SunnyLeone. But @bhupendrachaube has made me respect you🙏 https://t.co/qqASJt8yeZ

Sad that @bhupendrachaube , a ‘seasoned’ journalist, should conduct such a foolish, patronising, sexist interview. https://t.co/YCDAE1snyf

This is how you handle misogyny. @SunnyLeone handles @bhupendrachaube with grace, a word he’s unfamiliar with. https://t.co/mjkt4eIKpx

Your interview with Sunny Leone also reflected prejudices and biases which still exist within our society. No doubt pic.twitter.com/MxEjfas18o

If leone is a role model, then we hav really progressed as a society, even surpassed USA. If not, then chaubey has right to his scepticism.

Many, including writer Shobhaa De, also came out in support of Leone, calling Chaubey a “TV bully”.

Sunny Leone gets India's vote of approval. Good for you, Sunny!!! Boo to that chauvinistic, TV bully.

Just watched the much hyped #SunnyLeone interview. Respect for this woman who remains unfazed and poised thru all the grilling!

@bhupendrachaube it doesn't hurt to be a little more sensitive towards a person who hasn't had a very privileged past. #stupidInterview

At one stage of the interview, Chaubey asked Leone if she thought that an actor as successful and widely popular as Aamir Khan would ever consider working with her. Leone responded with a “probably not” — but five days after the interview aired, Khan tweeted his admiration for Leone's grace and dignity in the face of unthinkable humiliation.

I think Sunny conductd herself wid a lot of grace & dignity.I wish I cud hav said the same abt the interviewer (1/2) https://t.co/TDDHOlbOUL

Sunny,I wil b happy 2 wrk wid u.I hav absolutely no problems wid ur “past”, as the interviewer puts it.Stay https://t.co/jX4V3wULJ8.a.2/2

Many other Bollywood personalities have come out in support of Leone:

Opinions in the garb of questions. Credit to @SunnyLeone she spoke from the heart despite his mind games. https://t.co/Tl6ji2Adee

That was literally NOT an interview.. Just hyper opinionated statements with a question mark at the end!!! No Grace? Chivalry? Ridiculous!

He asks the same question for 20minutes. Because she doesn't satisfy him with the response he's looking for.#Respect https://t.co/RkG4B0C5d2

Inundated by online criticism, the journalist tried to provide an explanation in the form of an open letter which did little to repair the damage done. He stated:

We aren’t really going to the cinemas to watch her because she is a star. And I might just add here that I haven’t seen any of her Bollywood films. Because I have kids at my place, so I cant watch any of her films in her earlier avatar even if I wanted to. Sunny Leone is a newsmaker in her own right because of what was going on in her past, the circumstances she operates in today and the manner in which she deals with criticism which is bound to come her way.

Rohini Chatterji at the First Post reacted by saying:

But the Twitteratti was in no mood to forgive Chaubey for his unkindness, misplaced moral uprightness, insensitivity and lack of willingness to make amends:

@bhupendrachaube btw ur open letter does not justify ur obnoxious questions.

@bhupendrachaube ur open letter is as shallow as your interview. The only good thing about the interview though was that it had @SunnyLeone

If journalism is primarily about news gathering, the purpose of this crucial job seems to have been lost on Chaubey in his mission to shame Leone for her past. His stance came across as nothing less than shameful to the many Internet users who made it clear, through their support for Leone and their unabashed criticism for Chaubey, that today's India has no space for prejudice.