Five Years On: Time to Remember Those Who Gave All for the Egyptian Revolution 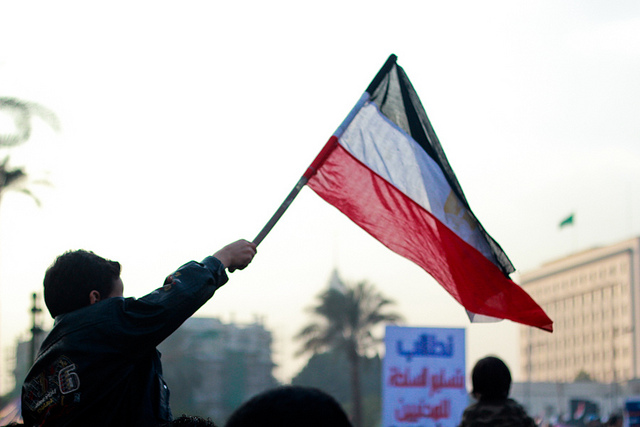 Tomorrow is the fifth anniversary of the start of the Egyptian revolution. Photograph from a protest in Tahrir in 2012. By Mosa'ab El Shamy, flickr, used with permission.

Walk down any street in downtown Cairo, you will likely see some wall graffiti voicing outrage and depicting the significant uproar that once existed. Steady growth in Egypt’s poverty, expanding political corruption, and unequal opportunities were the main ingredients of the Egyptian uprising of 2011, known as the 25th of January revolution. Located in the heart of Cairo, Tahrir Square became an icon for a series of events that shaped Egypt's modern history. Pitched tents, anti-Mubarak banners, and fluttering flags embodied the spirit of the scene. Crowds of liberal secularists to Islamic firebrands filled in the square, all summoned under one slogan “Bread, freedom, social justice”.

A glimpse on 25th of January

It all started with small networks of activists who were gearing up for mass action against the autocratic regime of Hosni Mubarak. Thousands of Egyptians from different parts of the country positively responded to calls on social media and defied the government ban to protest against the then president. It was the beginning of the end of a 30-year rule of a tyrant regime. Eighteen days of a sit-in succeeded in bringing down the country’s ruler on the February 11, 2011.

In no period of Egyptian history have people felt that sense of freedom as the one following February 2011. Nevertheless, as the situation intensified, the revolt started to take a new trajectory. Factions grew more disoriented as they began using Tahrir Square for partisan-inclined demands. With time, the political scene witnessed more struggles towards hegemony and power. A series of violent cascades followed as a result. In three years, the tightly organized Islamists, who managed to win presidential elections and a majority of seats in the Parliament, were dissolved by then Minister of Defense Abdelfattah El Sisi in July 2013 – leaving no room for political Islam in Egypt’s game of politics.

Since the overthrow of the Muslim Brotherhood President Mohamed Morsi, Cairo turned into a battle field between the government, backed by Sisi and opposition movements. Sisi has promised to bring security and stability and to confront what he called terrorism. However, his critics say he had intentionally cracked down on the Muslim Brotherhood organization and any forms of resistance.

At present, ahead of the 25th of January anniversary, the state is progressively tightening its grip over social media platforms, fearing the effective role it has played since 2011 in agitating mass opposition. It has been reported that Egyptian authorities have recently arrested three activists, including Taher Mokhtar, a famous anti-regime physician, after raiding their apartment in downtown Cairo for criticizing the country’s military and president.

Interior Ministry officials affirmed that they are to enforce security measures across Egypt and to confront any potential attacks in different announcements. A number of high-profile anti-Sisi activists are being detained with no clear charges, cultural venues are being shut down, and police regular check inspections are being carried out. The situation has worsened with the substantial execution sentences that have recently been issued. In response, a severe social media backlash gained ground against judge Nagi Shehata for his politicized death penalty verdicts against activists opposing the regime without enough evidence.

Nagi Shehata is definitely not an exception. The insults he says to the accused and the lawyers in his court sessions and what he says about 25th of January “loss” in the newspapers is exactly the same opinion of his fellow judges. However, he decided to voice his opinions publicly in a bullying manner because he's certain he's not going to be held accountable before the law. In this sense, he even lost the “external” condition that gives him the right to decide upon the fates of people and even issue death sentences. And since that he committed many unprofessional mistakes, he should be expelled just in an attempt to preserve the disillusioned prestige and the fake hegemony of the judiciary. In essence, #StopNagiShehata, so he could inaugurate a new office with Mortada Mansour or present a TV show. Because this is what he deserves

In the meantime, Egyptian politicians, journalists, and activists trended a Twitter hashtag under the name: “I participated in the January revolution” in an attempt to counter the state’s severe actions. Later, a Facebook page that carries the same name was launched and has exceeded 5K likes in three days.

Political satire TV show host and popular activist Bassem Youssef incubated #RememberThem into #IParticipatedIn25thOfJanuaryRevolution to shed light on the jailed political activists, as he explained in a series of tweets:

I participated in January revolution hashtag: I wish we could use it in a different way by remembering those who were arrested unfairly because of the revolution that we are proud of regardless of the setbacks

In the coming few days, I decided to use my personal account to publish the prisoners’ stories whether they are arrested with no charges or those who are missing due to enforced disappearance, or those accused of strange accusations. Our duty is to remember them all.

And in order to focus on these stories, we'd rather use the #RememberThem along with #IParticipatedIn25thOfJanuaryRevolution in order to center the light on them. Not only names but stories.

Journalist Amro Ali used both hashtags in honoring the martyrs of the January revolution as he tweets:

They participated in the #Jan25 Revolution. But would not live to remind #Egypt. #افتكروهم #انا_شاركت_في_ثورة_يناير pic.twitter.com/N6mvOew9mI

He then described the Egyptian police actions as “insane”:

Greetings for the souls of the martyrs. They revolted for bread, freedom, justice, and dignity. So the regime killed them

I participated in the January revolution not for somebody, not for the poor, not even for Egypt, but for myself, and in order to be a part from the most honorable thing that has happened in Egypt

I participated in January revolution, and how great this “accusation” is!