The Only Hero in Russia Who Isn't Named Putin 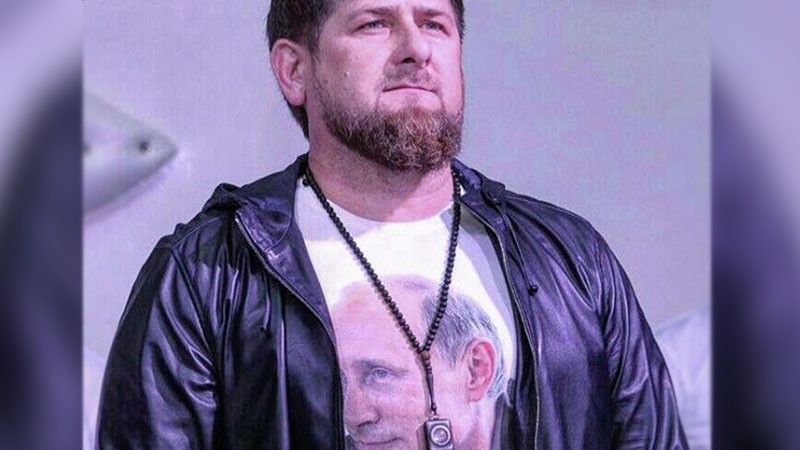 It’s hard to say anything new about Ramzan Kadyrov, who rules the Chechen Republic, which is still at least nominally part of the Russian Federation. Kadyrov used to be known as the republic’s “president,” until he decided in 2010 that he didn’t want to be called that anymore. “In Russia, only one state official has the right to be called president,” he told the Chechen parliament, in a love note to Vladimir Putin, and two weeks later Kadyrov got his wish—as he often does—and his title became what it is today: “head of the republic.”

While Ramzan Kadyrov isn’t Russia’s president, he is far more than a mere regional figure in the nation’s politics, and the past few weeks have offered only the latest evidence of his talent for grabbing attention and polarizing people. On January 12, Kadyrov told the press that representatives of Russia's protest movement—the so-called “non-systemic opposition”—should be treated as “enemies of the people” and “traitors.” Since then, he’s only escalated his rhetoric, threatening protest-movement leaders with vicious dogs and saying he’s ready to throw oppositionists in psychiatric wards.

In addition to threatening his critics, Kadyrov is also fond of humiliating them. These punishments are especially harsh when meted out to his own subjects inside Chechnya, where Kadyrov seems to have a blank check to do as he likes, so long as it spares Moscow a third war against insurgents.

Last month, in December 2015, before his current offensive against the nation’s “traitors,” Kadyrov was busy cleaning house in his own backyard, reminding subjects that any kind of public criticism—even if it’s an errant post online, or an audio recording shared on a chat app—is more than his regime will tolerate.

In early December, Kadyrov posted on Instagram a video of himself at the gym. He does this a lot, but in this particular clip he also wore a t-shirt featuring a giant photo of Vladimir Putin in sunglasses, above the words “Russia’s Army.” The video’s soundtrack is a song that repeats, over and over, the words, “My best friend is President Putin.” Internet user Adam Dikayev, a young man living in Chechnya, thought the video was an embarrassment, not least because Kadyrov posted it on the anniversary of the beginning of the Russian-Chechen War. “This event took place 15 years ago,” Dikayev wrote online. “Not 150, not 350, but just 15! And the tsar is jogging on a treadmill to the song ‘My best friend is President Putin.’ No one forgets and nothing is forgotten!”

Nine days later, a new video surfaced online (not on Kadyrov’s Instagram account, but clearly inspired by his workout clip) showing Dikayev on a treadmill. The song “My best friend is President Putin” plays, and Dikayev is missing his pants. He speaks to the camera, walking on the treadmill in his underpants, recanting his criticism of Chechnya’s leader and insulting himself:

I am Adam Dikayev from the village of Avtura. Thinking they wouldn’t find me, I wrote on Instagram something that didn’t need to be written. They found me, and they took my pants. I understand now that I’m a nobody. From now on, Putin is my father, my grandfather, and my tsar.

That same week, the Chechen regime squashed another detractor when it brought Aishat Inaeva onto a talk show, where Kadyrov himself scolded her—almost without interruption—for 30 minutes, using words like “extremism” and “Wahhabism.” The show’s host treated her no better.

What was Inaeva’s crime? She circulated an audio clip on the messaging application WhatsApp, where she complained that the state was holding back too much of her income as prepayments for housing and utilities costs. (She said specifically that 3,000 rubles—about $36 by today’s exchange rate—was withdrawn from her salary.) Not stopping there, she lashed out at Kadyrov directly, saying, “You don’t even let us take our wages home,” and asking, “Only you’re allowed to eat?” Inaeva’s criticism spread virally on WhatsApp and then other social media networks, before making it into the news.

Inaeva appeared on television beside her husband, though neither of them said much at all, spending most of the broadcast sitting silently, staring at the floor in shame. Her husband apologized for her, blaming himself for “allowing his own wife to speak so many lies,” while Kadyrov promised that he “wouldn’t punish her,” though he insisted that she tell the public why she decided to slander his administration. Inaeva could not produce an explanation.

Fast forward to mid-January, when Kadyrov turns his attention to troublemakers based largely outside Chechnya. There’s no obvious catalyst that prompts Kadyrov’s condemnation of “the non-systemic opposition” (the activists and social leaders who refuse to collaborate with the Kremlin), but condemn them is precisely what he does. Perhaps he had hoped to generate a national controversy with Dikayev or Inaeva, but failed, and was now trying again. Or maybe he was making a move in the multidimensional chess game that is Russia’s national politics.

Whatever the reason, Kadyrov’s remarks provoked Krasnoyarsk city councilman Konstantin Senchenko to respond in a Facebook post, where he recalled the glory days of war against Chechen rebels (Kadyrov included), and called Kadyrov a “national disgrace.” The text had something for everyone: nationalists could enjoy the bellicosity aimed at the enclave they’d like to expel from the federation, liberals embraced the moral outrage, and Kadyrov’s people—not just in Chechnya, but throughout the Russian establishment—finally got their opportunity to bring the axe down on those pesky subversives in the opposition.

The next morning, on January 15, Senchenko wrote again on Facebook, but this time he apologized for having offended the Chechen people by insulting their “respected” leader. (In a radio interview, however, he admitted to having received death threats, demanding that he recant his criticisms of Kadyrov.) Hours after the apology on Facebook, Kadyrov uploaded to Instagram a video of Senchenko’s apology, gloating in an attached comment.

In the week since these events, Russian social media users have responded with waves of both condemnation and support for Chechnya’s ruler. Borrowing Senchenko’s line about Kadyrov being a “national disgrace,” critics have tweeted, Instagrammed, and otherwise repeated the phrase in hashtags and angry social media posts. Some of the activity has even spread offline to small acts of vandalism. Supporters, meanwhile, have answered in kind, spreading the hashtagified slogan “Kadyrov is a patriot of Russia,” or “#KadyrovPatriotOfRussia.”

Because the flash mobs surrounding Kadyrov have involved people holding up paper signs (which are easily photoshopped), there are plenty of doctored photos going around, too. And sometimes it’s not even clear if the phonies are meant to mock Kadyrov’s supporters, celebrate them, or merely lampoon the entire concept of hashtag activism.

On Friday, January 22, Grozny hosted a mass rally for Kadyrov’s supporters, who also came carrying signs and banners denouncing the liberal opposition. Officials claim a million people showed up, though reports on the ground say the crowd was but a tenth that size.

Before the demonstration even began, however, Chechnya’s leader got all the support he needed when Kremlin spokesman Dmitry Peskov implied that anyone alarmed by Kadyrov’s remarks simply needs to calm down. “These are the people who operate outside the law and are prepared to break the law, even if it hurts the nation,” Peskov said of Russia’s protest movement, offering “context” to help alarmists understand why tough talk is necessary.

And if talking fails, you can always take their pants or berate them on television. Just ask Ramzan Kadyrov.