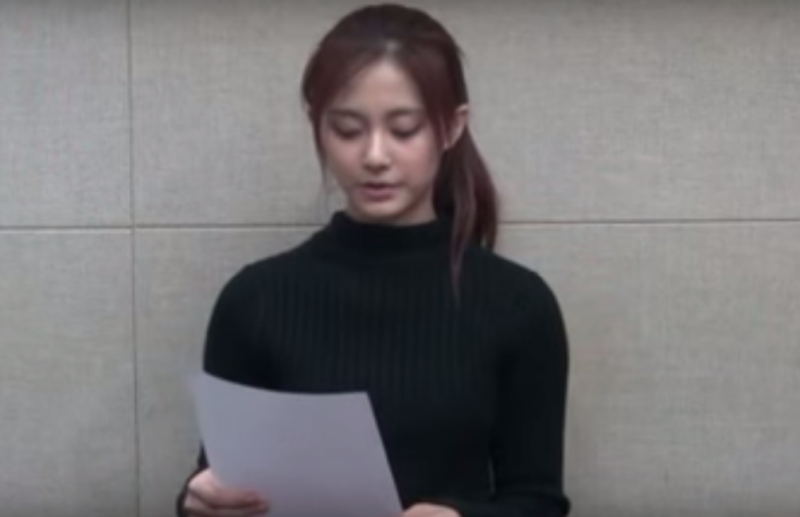 The original post, titled “The Chou Tzuyu Incident and Entertainment as a Site of Conflict About National Identity” was written by Brian Hioe and originally published on New Bloom on January 19. The following edited version is republished on Global Voices in accordance with a content partnership agreement.

A video of 16-year-old Taiwanese K-pop performer Chou Tzuyu unexpectedly went viral in Taiwan the day before the island nation's 2016 presidential elections. In the video, Chou apologized for a previous online video in which she held the flag of the Republic of China—the name by which Taiwan is internationally known.

The act was interpreted by mainland Chinese netizens as pro-Taiwanese independence, hence not welcome in mainland China. China has considered Taiwan as a breakaway territory ever since the Chinese civil war in the late 1940s, when the losing Kuomintang forces retreated to the island. In the past, Beijing has threatened force to retake Taiwan if it were to formalize its defacto independence.

As a response to the accusation, Chou apologized in the video, stressing that she was Chinese and that China is a singular unity. The video was released on January 15, the day before Taiwanese went to the polls to elect their next president..

The first person to accuse Chou of supporting Taiwanese independence was infamous entertainer Huang An. Huang, like Chou, is a performer and hails from Taiwan. However, he has since become a naturalized Chinese citizen and currently lives in China. 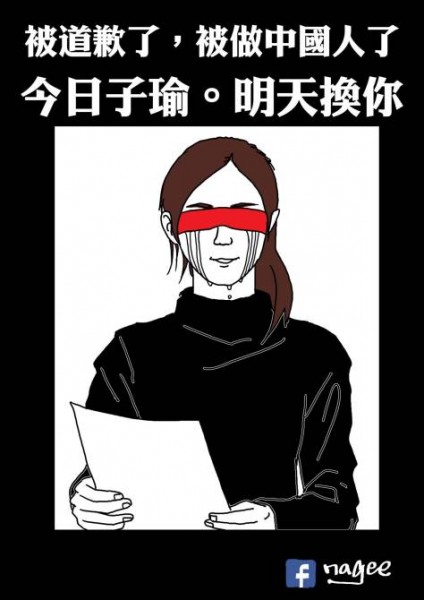 Internet meme comparing Chou to an ISIS hostage. Text at top: “Forced to apologize, forced to become Chinese. Today is Tzuyu, tomorrow is you.” Photo from Facebook user Nagee.

Though Chou's apology initially encountered some online backlash by individuals who accused her of renouncing her Taiwanese identity, a wave of support for her and criticism of Huang An has since ensued.

The teenage performer is seen as a victim forced to apologize, with one online meme comparing Chou to ISIS hostages forced to speak in front of a camera at gunpoint. The video of Chou has also been compared to the video of missing Hong Kong bookseller Gui Minhai recently broadcast on mainland Chinese state-run television claiming that he had turned himself over to authorities for a hit-and-run incident in which he killed someone. Gui vanished from Thailand a few months ago and a large number of overseas Chinese believe that he was kidnapped by mainland Chinese police for publishing books critical of the Chinese Communist Party.

The power of the Chinese market

In past years, there have been a number of Taiwanese entertainers who pledge a Chinese identity in public in order to enter the Chinese market. The socioeconomic incentive of doing so for performers is clear, given that the Chinese market is much larger than the Taiwanese one.

Indeed, the Chinese market is a large consumer of K-pop. Reportedly, Chou was forced to apologize by her Korean managers who were afraid that Chou and her K-pop idol group, Twice, would be banned from entering the Chinese market.

After all, supporting Taiwanese independence not only runs the risk of backlash or public boycott, the Chinese state can ban individuals who are too critical of the government from reentering China. Taiwanese pop singer A-Mei was banned from entering China for singing at the inauguration of pro-independence Taiwanese President Chen Shui-Bian. Likewise, Freddy Lim, frontman of the heavy metal band Chthonic and a newly minted legislator in Taiwan's latest elections, is banned in China because of having openly expressed support for Taiwanese independence through song.

The politicization of entertainment

Actually, in the case of Chou, waving the Republic of China flag in Taiwan would not normally be perceived as advocating Taiwanese independence. Taiwanese independence advocates typically do not identify with that flag, seeing the Republic of China as a colonial regime imported by the Kuomintang after they were defeated by the Chinese Communist Party in 1949.

The video of Chou Tzuyu’s apology, released a day before the presidential elections, attracted much public discussion. In fact, all three major presidential candidates in Taiwan would eventually weigh in on the incident and express disapproval of the treatment of Chou. Even the pro-unification Kuomintang presidential candidate Eric Chu expressed sympathy for Chou and called for her to return home to Taiwan.

Many viewed the Chou Tzuyu matter as swaying public sentiment against the Kuomintang and a contributing factor to the party’s substantial loss in not only the presidential elections, but legislative elections too.

Some even suggested that the incident may have prompted more people to go home and vote and speculated that people voted for the opposition Democratic Progressive Party as a gesture to affirm their Taiwanese national identity.

The incident has further politicized the cross-strait entertainment business. While Taiwanese singers and actors who want to enter China are forced to spell out their “one China” belief in public, they face backlash at home. For example, Taiwanese netizens erupted in anger at another pop-star, Show Luo, who recently claimed at an awards ceremony in Beijing that “We are all Chinese.”  Some even urged him to become a naturalized Chinese citizen in the same manner as Huang An.

In the future, we can expect more entertainment news appearing in the political news section as the industry continues to be yet another arena of contestation in the struggle to preserve Taiwanese national identify.