Can Our Children Be Safe? Pakistanis Ask After University Attack 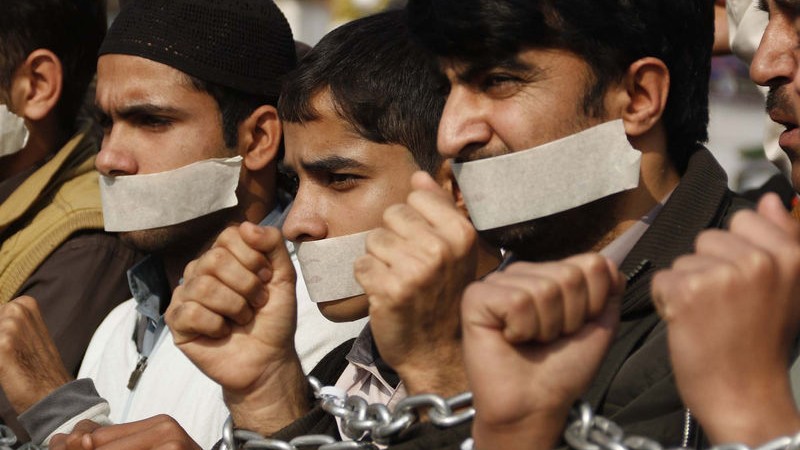 Members of civil society protesting in Karachi, Pakistan, against the attack on Bacha Khan University of Charsadda. Image by ppiimages. Copyright Demotix (21/1/2016)

Heavily armed militants stormed Bacha Khan University in Charsadda on 20 January, 2016, and opened fire on students and staff members, killing 21 people and many more injured. The Tehreek-i-Taliban Pakistan (TTP) claimed responsibility for the attack, in which the four attackers were killed by security forces.

Charsadda, is about 50 kilometres from Peshawar, where in December 2014 Taliban gunmen killed 141 people, including 132 schoolchildren, at a branch of the Army Public School (APS).

The sheer scale and brutal violence in that attack spun the government to close all schools across Pakistan for a month, and the provincial government made it mandatory for all educational institutions to go through a security audit, train and arm their watchmen, install metal detectors, and increase their boundary walls to eight-feet, topping them with two-feet high razor wire. Bacha Khan University fell under this audit too and had 54 security guards on campus when the attack took place. More than 3,000 students are enrolled at Bacha Khan University.

Even though there hasn't been a fatal attack targeting an educational institute in Pakistan since the 2014 violence at APS, the wounds of that bloodshed are still raw.

Element of surprise is what would have resulted in maximum casualties & fatalities. No Institute can respond to such an attack w/out losses

The teachers and students at Bacha Khan University were attending a poetic symposium in the school to commemorate the 28th death anniversary of renowned Pakhtoon leader and proponent of non-violence Khan Abdul Ghaffar Khan, popularly known as ‘Bacha Khan’. Khan opposed the partition of India and Pakistan after independence in 1947, and he toured India in an effort to quell inter-communal violence. Bacha Khan University was built by his own party, Awami National Party, in 2012 at Charsadda, his birth place.

The Bacha Khan University has come under attack by terrorists on the day when his death anniversary is being observed. Such is the irony.

Pakistanis were not only outraged at the perpetrators of the attack, but also directed their displeasure at authorities. A year ago, Prime Minister Nawaz Sharif announced a comprehensive roadmap to counter the threat of these armed groups in his National Action Plan, the effectiveness of which has been much criticised.

This is going to be a test.. a harsh one.. comparisons will be drawn.. you can't have winners when children have been snatched from parents

Under the plan, the government quickly passed a constitutional amendment relinquishing justice to “speedy military courts” to sentence “hardcore terrorists”, and arrested dozens of suspected “hate preachers”, launched more than 28,000 “terrorist” sweep operations across the country, arresting more than 100,000 people and lifted a seven-year-old moratorium of the death penalty executing more than 300 people, who were on death row, in 2015.

The death penalty does not deter terrorism. In fact, it can act as a propaganda tool for the militants as a contested claim of the responsibility for the Charsadda attack attests. Finally, the Bacha Khan University and the day of the attack do not appear to have been selected randomly.

The tolerant, compassionate, inclusive politics of Abdul Ghaffar Khan is what Pakistan ought to embody, and what the militant extremists are seeking to destroy. They must not win. Essential as it is to physically eliminate militancy, the very idea of the Taliban needs to be defeated too by making Pakistan a peaceful, democratic and constitutional land.

Writer Umer Ali also doubted the efficacy of the National Action Plan in an oped at The Nation:

Whatever the military demanded, civilian government gave – from military courts to foreign policy, everything has been under control of Army. But what are the results beyond photo-ops and extensive PR gains? 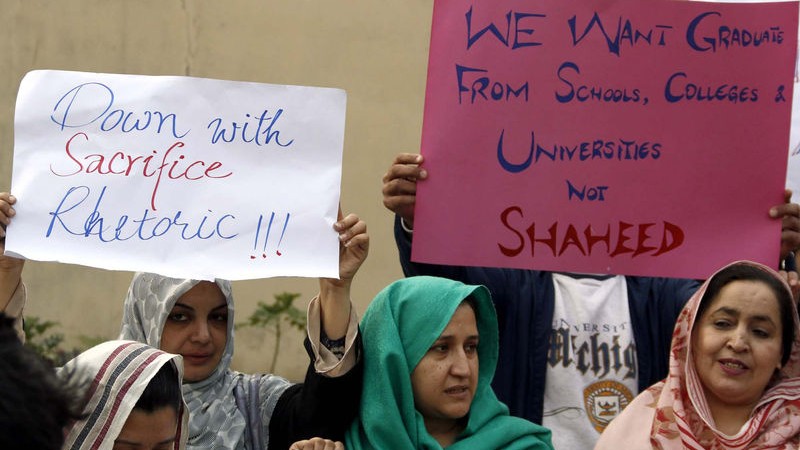 Members of Civil Society are protesting against the attack on Bacha Khan University of Charsadda. Image by piiimages. Copyright Demotix (21/01/2016)

According to a report released in 2014 by the Global Coalition to Protect Education from Attack (GCPEA), about 30 schoolchildren and 20 teachers lost their lives, in attacks on education institutions in Pakistan between 2009 and 2012. Perhaps one of the most famous victims of this violence targeting education is Nobel prize-winner Malala Yousafzai, who was shot in the face and neck on her school bus for “promoting secular and anti-Taliban values” by campaigning for girls’ schooling.

According to one timeline, 229 people were killed in attacks of all kinds in 2015 in Pakistan. In 2014, 280 died, and 429 lost their lives in 2013. A day before the horror at Bacha Khan University, 10 people were killed in suicide attack targeting security forces vehicle in the Khyber region of Peshawar, for which Tehreek-i-Taliban Pakistan claimed responsibility.

And rumors of security threats to educational institutions forced closure of several educational institutions in the same region earlier in the week. A recent video message the Taliban faction behind the Bacha Khan University massacre in Charsadda vowed to target schools throughout the country, calling them “nurseries” for people who challenge the group's interpretation of holy law.

Columnist and activist Ali Salman Alvi argued in an oped in NDTV.com that even though the National Action Plan “looked good on paper, the situation on the ground remains disturbingly awful and unchanged”:

While it is obvious that it'll take significant amount of time to eliminate terror from Pakistan, the more worrying part is that the state of Pakistan has shown no clear intent or political will to counter the mindset that has been a major hurdle in developing a counter-terrorism narrative in the country.

The question is whether Pakistan will be able to stem the flow of expanding militancy in the country. An editorial in The News asks “How many children are we to sacrifice before history and politics teach us which way salvation lies?”