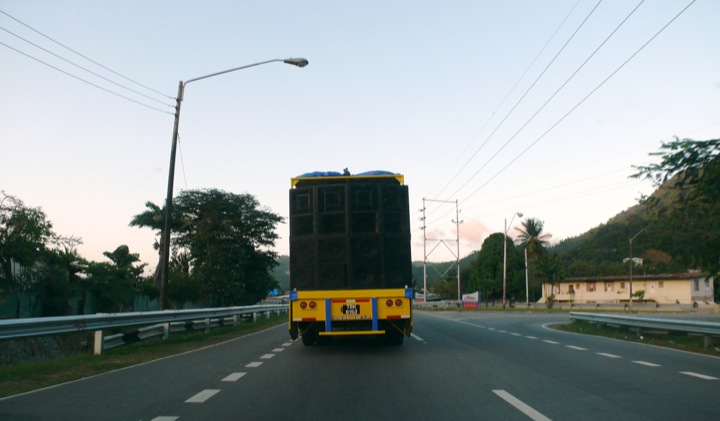 “Carnival Saturday—driving behind a music truck on the Diego Martin highway—and almost getting blasted out of the stratosphere.” Photo by Georgia Popplewell. CC 2.0.

Trinidad and Tobago may very well be one of the loudest countries in the world, especially at this time of the year. From just before Christmas until after the country's annual Carnival celebrations, citizens face an auditory assault generated by the illegal use of fireworks and loud music blaring from parties—not to mention the elevated decibel levels associated with the music trucks that accompany masqueraders during their two days of street revelry on Carnival Monday and Tuesday.

One netizen has decided that she has had enough and is doing something about it. Josephine Aché wrote a “letter to the editor” and sent it to the country's mainstream media outlets, as well as the popular website Wired868, which prides itself on smart and often satirical commentary about sports and politics. The site posted the letter, referring to it as “a call to arms”:

This is an Open Letter to […] the Environmental Management Authority, who are a complete waste of time.

They do nothing to protect our citizenry from these inconsiderate, lawless, money-making, noise polluters who yearly get away with decibel crime!

Aché recounted her experience with a fete promoter who promised to “take [her] concerns into consideration,” but, when the party began, “the decibel levels just kept rising as the DJs amped up the volume”:

Please understand that I love and celebrate Carnival just as much as the average Trini. However, I do not understand why residents who aren’t ticket paying feters must be subjected to speakers facing the road and a baseline that vibrates one’s house until 4.00 am.

Added to this, the DJ(s) scream constantly imploring people to jump and wine and wave a rag or whatever. One could be forgiven for thinking a super aerobic-thon was in progress. […]

Just when you think your sleepless night cannot get any worse—POW! KAPOW!! Fireworks at 3.19 am!

Aché's main concern is finding a way to get existing laws enforced:

Fete promoters—not the paying feters—need to take responsible actions regarding the wellbeing of the elderly, the very young, pets, birdlife and the list goes on…

Speak up, Environmental Management Authority (EMA). We can’t hear you over the deafening roar of the music and yelling.

Where are you? Wining [Trinidad and Tobago's famous hip swivelling dance] in compliance?

Who is going to protect the rights of the non-partygoers? Whose job it is to have their people at these type of events, so as to ensure these situations do not become a reality?

Where is the new testing equipment they spoke of so openly in the media, just a few short months ago?

But Aché did not stop at the letter: she also launched a Facebook group to help agitate for change. Trini's AGAINST Noise Disturbance is a civic group focused on eliminating noise pollution. Buoyed by the success of an online petition addressed to the country's prime minister (which she started after a particularly disruptive Christmas season thanks to the illegal and widespread use of fireworks in residential areas), the Facebook group hopes to be a real agent of change.

So far, the government actually seems to be listening, hinting at upcoming legislation intended to tackle the illegal fireworks issue (especially on the heels of the country's first two murder victims this year: a six-year-old boy and an elderly woman, who were killed in what police have called “happy gunfire” during celebratory fireworks on New Year's Eve).

Those two deaths occurred in Beetham Gardens, one of the country's most economically depressed areas, but netizens in other areas of the country reported similar incidents. Facebook user Schemmel Fakoory wrote about his experience on the group page:

On NYE a stray bullet entered the through the ceiling in the dining room of my Inlaws’ home in Victoria Gardens. Just a few hours earlier our family gathered to have dinner. The noise of fireworks masked the sounds of gunshots in the area. There should be prescribed dates, times, places and conditions, under which fireworks should be set off in Trinidad & Tobago that laws are followed and enforced

In a guest post for Wired868, attorney and newspaper columnist Martin Daly weighed in on the legal aspects of the issue, referring to it as “a lack of objective justice in our country”:

If a consumer chooses to have a spicy meal or a hot Latin dance and gets sick there is a voluntary element in contracting the sickness. The discomfort is not spread large and loud, like fireworks through whole neighbourhoods, regardless whether the neighbourhood wishes to pursue that activity. […] There is little ambiguity in the law about where fireworks may be discharged.

You can read about the fireworks regulations here and the laws about noise pollution here.

If necessary, Aché is prepared to take her protest into the offline world. Earlier this month, she wrote on the Facebook group's page that she's discussed with the Commissioner of Police's Office the possibility of holding a peaceful demonstration in the capital:

I was given a long list of requirements that needed to go into the application for permission.
Before I get into those, he reminded me that we are just 3 weeks shy of Carnival 2016 and there are a number of Events happening in and around POS so timing had to be chosen carefully, I might suggest if we want to go that way that we perhaps wait until Carnival is over.

She listed a few criteria necessary to gain police permission for a march (including an estimated number of participants), saying:

ONLY until we are SERIOUS about doing this and I know EXACTLY how many are willing to attend can we even begin to think of a proposed date and do application.
So, I'm throwing it out to all of you, whatever you decide I will be ok with.

Even with the distraction of Carnival, netizens are taking notice, however. One contributor to the Trini's AGAINST Noise Disturbance page shared a poem, summing up aptly the feelings many now share about the constant barrage of noise in Trinidad and Tobago:

Everybody know we's fetters
Dey call we Trini to de Bone,
So all who cyar deal wid de noise
Take a side an’ leave we alone.
[…]

Babies, the Sick and Elderly
May have a problem wid de noise,
But de DJs an’ Fetters deaf
From playing wid Decibel's Toys.
Some people want to legislate
Bout noisy fetes and Fireworks,
But tell me Who go Prosecute
De t'ousands of Lawless Folks.
Big Business an’ Fete Promoters
Full ah Money an’ have Court Clothes,
So dey could always Flout de Law
While Protestors could only Pose.
Which one ah you Carnivalists
Prepared to boycott any Fete
To support de Anti Noise Group ?
Not many, I willing to bet.
Plenty who sign de petition
Just jump on Bandwagon to Talk
But if you put dem to de Test
How many are willing to Walk?

When it comes to this final question, Josephine Aché and like-minded netizens might soon force an answer.