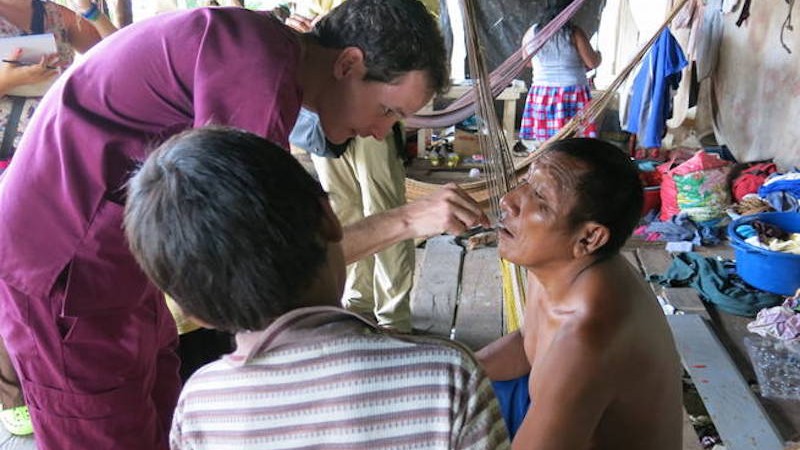 A specialist conducting a preliminary HIV test on a Warao patient. To determine if a patient has HIV, two tests are run: first a saliva sample is studied and if it tests positive, the patient must undergo a blood test. Photo by Minerva Vitti, published with permission.

This story is an adaptation of the first installment of research conducted by Minerva Vitti and was previously published on ArmandoInfo. [1]

The day Monsignor Felipe González asked the residents of San Francisco de Guayo, an indigenous village located in the Orinoco Delta on the far northeastern tip of Venezuela, to describe what people felt before they died, everyone started naming fever, diarrhea, weight loss, weakness, and dizziness. No one mentioned the illness that encompasses all of these symptoms.

“Folks, you are dying of AIDS,” said the priest. In San Francisco de Guayo, as in other nearby communities, many of the Warao people [2] do not call AIDS by name, but by the symptoms they experience.

San Francisco de Guayo, which is located in the Antonio Díaz municipality of the Venezuelan state of Delta Amacuro [3], was one of the eight communities where in late 2011, Dr. Julián Villalba and other researchers from the Venezuelan Institute for Scientific Research and the Biomedical Institute at the Central University of Venezuela conducted a study [4] that confirmed 55 cases of the human immunodeficiency virus (HIV) among the indigenous population.

The specialists became alarmed because 9.55% of residents in the eight communities studied had contracted the virus. Up until that point, the highest rates in the world corresponded to a distant region: Sub-Saharan Africa, with 5% of the population.

The research that specified the types of HIV contracted and the population’s infection rates were presented at meetings with Deputy Ministers of Health Miriam Morales and Claudia Morón in 2012 and 2014, respectively. Of these two health authorities, only Claudia Morón remains as a deputy minister of the Public Health Network. At that time, the officials guaranteed they would take action, that a part of the institution was already aware of the problem, and they would plan field research.

In 2015, some of the specialists from these studies as well as anthropologists conducting other research about the determining social factors of HIV infection in the Warao communities (carried out by the Foundation for Population Growth and Development [5], and which has not yet been published) met with representatives from the office of the Venezuelan ombudsman to update them on the situation. It is only known that after that they traveled to Tucupita [6], the capital of the state of Delta Amacuro, where they met with authorities and held workshops with community leaders.

Since then, however, nothing has changed.

A person can be infected with HIV for eight to 10 years without having any symptoms, yet still spread the virus. Someone infected with the most common strain in Venezuela, HIV-1 subtype B, could live during that time without treatment, but the Warao are developing AIDS symptoms in less than five years.

Other studies [7] suggest that the virus entered the community about three decades ago and has progressed very quickly. It is well known that the outlook is devastating: the magnitude of the epidemic, the rate of transmission, and especially the aggressiveness of the strain.

In 2007, the Venezuelan Red Cross had identified 15 cases of HIV in the San Francisco de Guayo community and its surroundings (Murako, Jobure, Jobure Island, Ajimurina, Merejina, Kuamujo, La Mora, and Guayaboroina). Today, HIV is present in 26 Warao communities. The leaders of the Jeukubaca community disappeared two years ago when the majority of its inhabitants died of AIDS. This was confirmed by a list of statistics of the deceased maintained by the Guayo hospital. Most were men. The women who remained abandoned the town.

This first installment of research conducted by Minerva Vitti was previously published on ArmandoInfo. [1] Her research has four parts, which follow the framework of the Diploma in Investigative Journalism from the Press and Society Institute (IPYS) [8] in partnership with the Andrés Bello Catholic University of Venezuela (UCAB) [9]. Read a previous Global Voices post on health conditions in the Warao community by Minerva here [10].