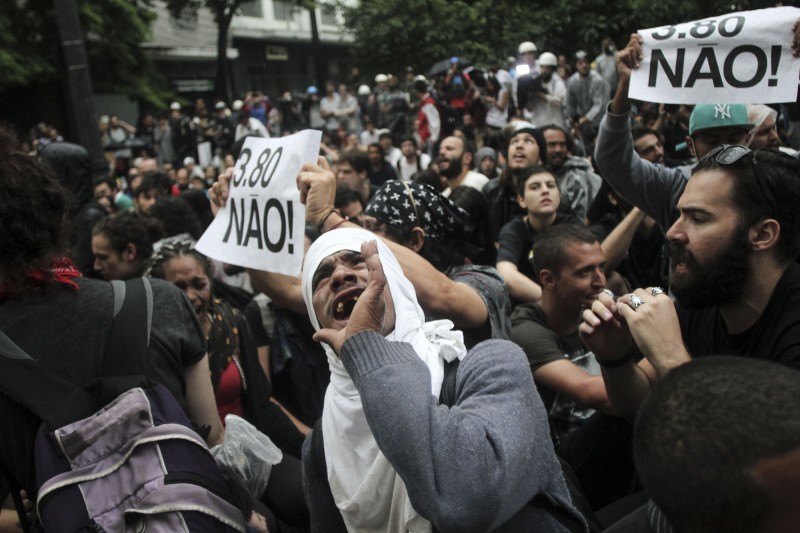 São Paulo will have its fifth protest against the fare hike this month on January 21. Photo: Mídia Ninja, CC 2.0

As the new year dawned with public transportation fare hikes in some major Brazilian cities, the Free Fare Movement, a leading force in mobilizing for cheaper tickets, organized multiple demonstrations across the country — sometimes met with violent crackdowns from the police.

In São Paulo, bus, train and subway fares increased from 3.50 reais (0.85 US dollars) to 3.80 (0.92 US dollars), while in Rio de Janeiro the fare rose from 3.20 to 3.50. State and city governments blame Brazil's high inflation rate — the highest in 12 years — and rising costs of electricity for the hikes: Protesters, however, are demanding a thorough revision of transportation policies that rely on private enterprises, claiming these business make a generous profit out of public subsidies.

A study carried out in 2015 by Fundação Getúlio Vargas, a local research center, found that public transport in 21 Brazilian cities are among the most costly in the world in relation to the average salary, outranking cities like London, Tokyo and New York. The study calculated how many minutes the average employee needs to work in order to afford a single journey bus ticket — 13.3 minutes in São Paulo, 13.2 in Rio de Janeiro, 11.3 in London, 6.5 in Tokyo and 5.8 in New York. 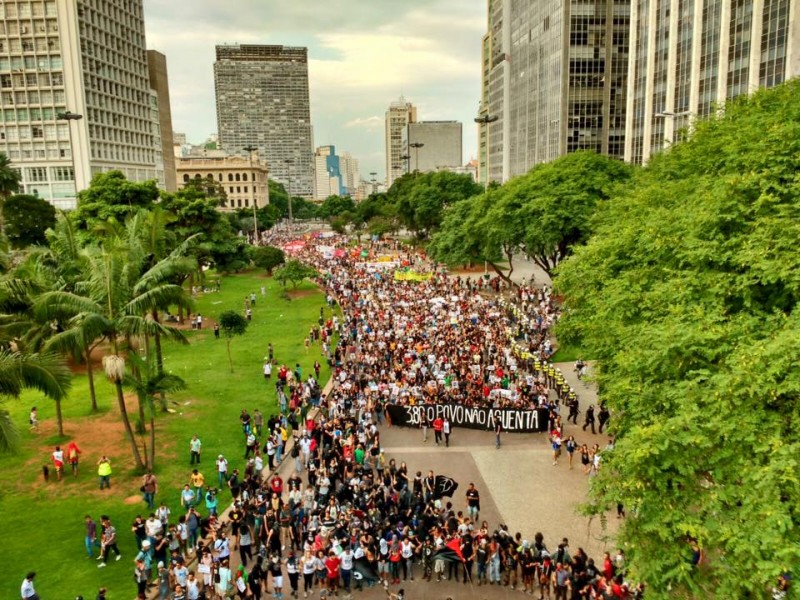 In June 2013, protests against a fare hike also led by the Free Fare Movement triggered the largest demonstrations in a generation in Brazil, with their political implications still being debated to this day. In early 2015, the movement once again mobilized protests against another fare hike, but this time they didn't pick up speed as before because a different group of protesters stole away the media spotlight for demanding the impeachment of President Dilma Rousseff.

So far in 2016, six demonstrations have taken place, four of them in São Paulo alone. The first two, January 8 and 12, were the most violent, with police firing rubber bullets and tear gas at protesters, leaving dozens injured, some seriously. On January 12, the protest was cut short by the police following a disagreement with organizers over the route of the march. Police accused protesters of damaging public and private property, and more than 25 people were temporarily detained.

Demonstrations were widely tweeted and dozens of photos and videos have sprung up online. The one below was recorded in São Paulo on January 12:

Activist Caio Castor recorded the same scene from the ground:

Among the injured on January 12 was a homeless man who was collecting cans in the area, hit by a rubber bullet in the leg. Another was subway employee Heber Veloso, who says he was beaten up by the police. One protester was shot in the eye with a rubber bullet, but isn't at risk of losing his vision, while another suffered a hand fracture and had to undergo surgery. 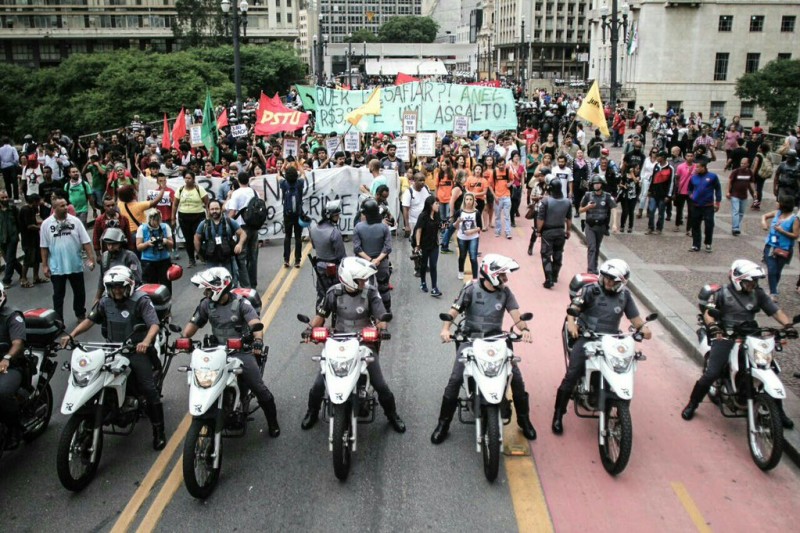 During the third demonstration on January 14, protesters complained of the disproportional amount of police officers deployed to follow them, accusing the state government — who controls the police forces — of ‘psychological terrorism’.

Former students of mine and of @Hupsel report via message the impossibility of getting into the demonstration with so much police. Psychological terror!

Note the amount of military police …

Shock [the name of a military police division] in Sé Square, demonstration against the fare increase in São Paulo

The protests managed to gain support from other social movements in São Paulo such as the Homeless Workers Movement (MTST), which has a solid base in the city's poor suburbs (the Free Fare Movement in contrast finds most of its support amongst students). During a demonstration held on January 19, the Homeless Workers Movement gathered 5,000 people in São Paulo's Itaquera district in the city's far east, where World Cup Stadium Arena Corinthians is located, and in Capão Redondo, in the city's south. 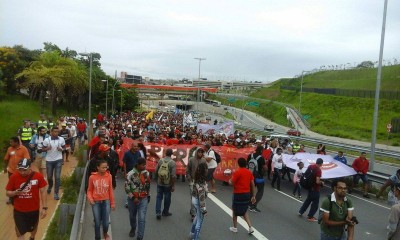 Homeless Workers Movement demonstration in Itaquera. Photo from the MTST profile on Facebook.

Strengthened by the support of movements like the Homeless Workers Movement, fare protests gained momentum this week. With four simultaneous demonstrations in different parts of the city, more than 30,000 people took part in another day of struggle against the fare increase in public transportation in São Paulo.

A fifth demonstration in São Paulo has been called for January 21, although it remains to be seen whether those demonstrations will gain the momentum of those in June 2013 or if they will succeed in pressuring state and city governments to revoke the fare hikes once and for all and not for just a few months.