Warlords to the Lebanese People: Let’s Forgive and Forget! 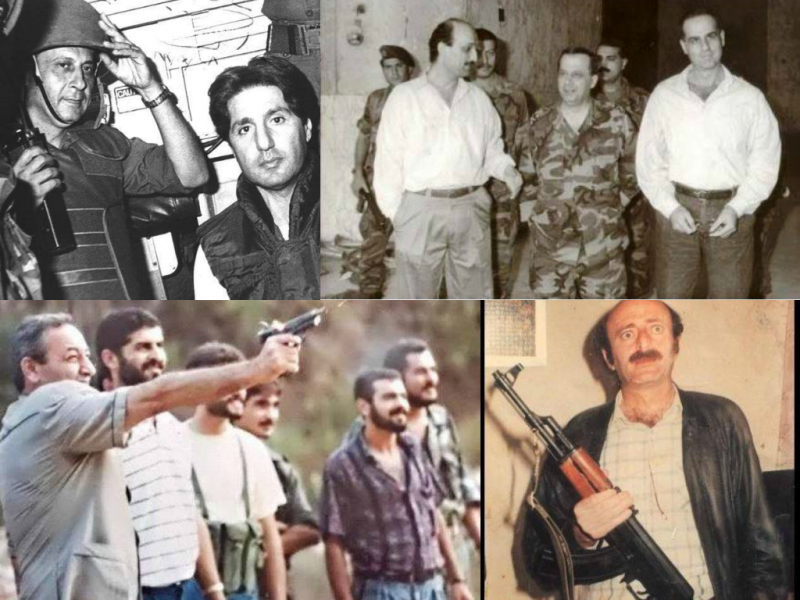 Lebanese “Warlords Collage”. Geagea (with mustache) and Aoun (in uniform) appear in the photo at the upper right. Source: moulahazat.wordpress.com

Lebanon is special, we know, because our ancestors are Phoenician and because we can swim and ski in the same day. But Lebanon is also special because key figures of the Lebanese civil war are still in power, waltzing on the corpses of thousands of dead civilians and the living bodies of 4.5 million Lebanese citizens. On January 18th, 2016, Lebanese Forces leader Samir Geageapublicly endorsed his wartime rival Michel Aoun’s candidacy for president. This agreement means that Lebanon might finally have a new president, after 20 months in which the country's top post has been vacant.

Here’s some context. Geagea, the executive chairman of the Lebanese Forces, the second largest Christian political party in Lebanon, and Aoun, a former Lebanese Army Commander and founder of the Free Patriotic Movement, are former enemies who fought against each other during the Lebanese Civil War (1975-1990). On January 31, 1990, the Lebanese Army, with Aoun as its commander-in-chief, clashed with the Lebanese Forces (then a militia). The latter objected to Aoun’s assertion that it was in the national interest for the government to “unify weapons”, meaning that the Lebanese Forces should submit to his authority as acting head of state. The clash resulted in the deaths of hundreds of civilians.

I felt the need to add my two cents’—or two liras—on this state of affairs because of what General Aoun said during what blogger Joey Ayoub compared to an acceptance speech at the Oscars—that he wanted to leave the past behind in order to build the future.

“I would like to thank the academy for giving me this opportunity to shine” https://t.co/ThGW42dv0h

People are sharing stories online of the times Aoun and Geagea bombed their neighborhoods. I can't testify to that, as I was too young at the time and had the “luxury” of being born in a remote village in the north of Lebanon. I can't testify first-hand to the pain of the war, to the loss, to the fear, to the experience of living surrounded by death. But I can testify to the hatred I saw, and continue to witness, between people my age or younger who also did not live through the war. No matter what anyone says, Lebanon’s regions, cities and neighborhoods, already riven by sectarian divisions, are still divided between the Aoun and Geagea camps.

I am not dismissing the experiences of these young partisans, nor those of their loved ones. But I do wonder how they, with no direct experience of the war, manage to muster such hatred, why they listen to songs about an ugly war that ended 25 years ago that describe one leader as the alpha and omega and the other as god sent. I’m puzzled as to why they learn how to signal their support by honking their car horns—a “taratatata” or a “tata tatata tata tata tata” in the wrong place or time can get you into trouble—display party stickers on their cars, and wage their own second-hand war. A bloodless one, it’s true, but a cold war nevertheless.

Where is the urge to question those they blindly follow, and ask questions like “what happened”? “Who won”? “How many people died”? “What happened to those who were kidnapped”? “How many women and girls were raped”? “How many corpses were tied and dragged behind cars like war trophies”? “How many loaves of bread were stolen at checkpoints”?

During his “acceptance speech” Aoun basically said that what happened happened, and we should put it behind us, and maybe remember it so that we don't repeat it. Geagea was smiling beside him.

Well, even though it is our fault (we elected them, after all, over again over again, those times we were actually allowed to have elections), I don't want to stop believing that we deserve better. This endorsement, this deal between two war criminals, represents yet another nail in the coffin of our collective memory. Those of us who didn't experience the war are now stripped of our ability to hold these men accountable for the deaths of thousands. And now they tell us to forget and move on. Because it is convenient for them? Because after years of wanting to eliminate each other, this is the only way to survive? We shouldn’t question their pasts or demand justice, yet these men want us to trust them with our future?

It’s about peacemaking, they say. But can peace really exist in a vacuum? How can we   achieve peace without a reconciliation process? Without healing the wounds of the past? How can peace exist when a silent, brutal, cold, war is being waged every day?

Where, indeed, is there room for peace when all we see is corruption, unaccountability, nepotism, theft, and the dismissal of an entire people?