On Criticising Charlie Hebdo on Facebook, and the Perils of Selective Freedom of Speech 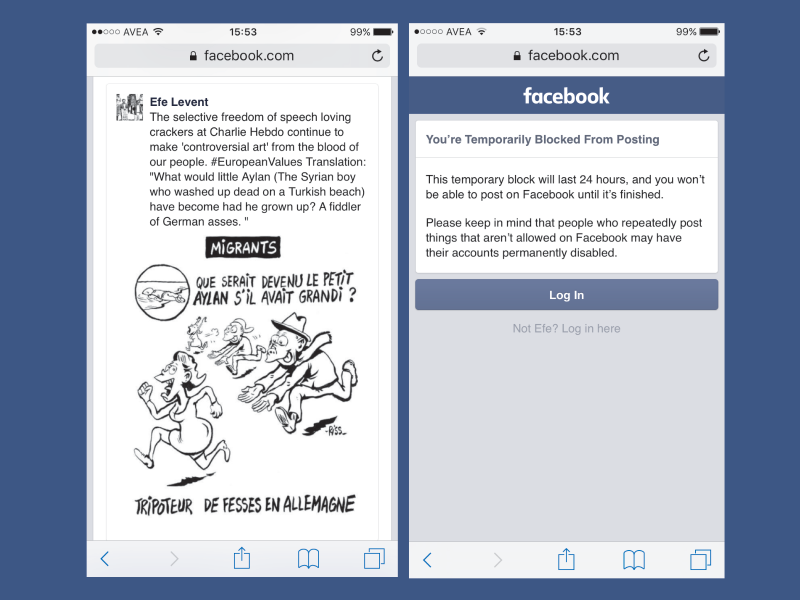 People who are politically active learn very quickly to adopt different personas according to the situations they’re in. This generally first happens around the family dinner table, where we become versed at suppressing our indignation and resisting the urge to pontificate on our latest cause. Because nobody wants to be too self-righteous to enjoy a little quality time with people they love. At least until after dessert.

Outside of the family circle, we also establish bonds of love and trust with people with whom we share common interests, ideas, opinions, a common language. And it is this sharing that make us grow together into a community. This is why Charlie Hebdo’s depiction of a dead Kurdish child does not appear to my community an act of solidarity, as its defenders have claimed. The repeated exploitation of Aylan Kûrdi’s body to make edgy works of satirical art does not strike us as something a caring person would do. It strikes us as callous and inconsiderate. Particularly when Kurdish activists are offering suggestions for meaningful acts of solidarity the French could perform in order to address their state’s own complicity in the crimes committed against the Kurdish people.

“The repeated exploitation of Aylan Kûrdi’s body to make edgy works of satirical art does not strike us as something a caring person would do.”

These were the thoughts behind the commentary I posted about a Charlie Hebdo cartoon on Bay Area Intifada’s Facebook page. I was commenting on the fact that the freedom of speech that is granted to some is often denied to others.

How ironic is it, then, that my comment was removed from Facebook within less than 24 hours? The cartoon itself is still circulating on Facebook, so it is clear that Charlie Hebdo’s offensive drawing is not the problem. I looked up Facebook’s Community Standards to get an idea of why my post may have been removed. It contained no reference to “regulated goods”, “self injury”, or criminal activity. The closest the guidelines come to possibly describing what I had done is “hate speech”.

According to the guidelines: “Facebook removes hate speech, which includes content that directly attacks people based on their: race, ethnicity, national origin […].” My post neither advocated violence, nor called for revenge. It merely pointed out that white supremacy obfuscates its own mechanisms—hello, irony! Unless of course, some exceptionally sensitive auto-censorship algorithm interpreted “German asses” (my translation of “des fesses en Allemagne”, part of the cartoon's caption) as my calling German people donkeys, and got frightfully offended. The other possibly contentious word in my commentary is “cracker.”

I admit the word is vulgar and disrespectful. One I would not use at the family dinner table (if my family’s native language were in fact English). More importantly, no one at our family table would use Aylan’s death to make a snarky joke. French intellectuals of the Charlie Hebdo type look more and more like uninvited guests who show up drunk at your house, insult everyone with crass personal jokes targeting members of your family, then complain that the sophistication of their humour is lost on the people in the room. Meanwhile, Aylan’s family remains perplexed as to why some French cartoonists are so keen on mocking their trauma.

But “cracker” is a word I use regularly with the people I consider my community here in Turkey.

“I watched white anarchists flip like weather vanes from protesting against the occupation of Iraq to holding candlelight vigils. I realised then that we are not the same. That solidarity is for white people. That not all lives matter.”

I have been politically active in various shapes and forms since I was a teenager. I received my first death threat for speaking my mind at the tender age of 16, when I publicly insulted Atatürk, the founder of the Turkish state. Ever since then I have hopped around from movement to movement, protest to protest. I was protesting in Gleneagles against the G8 in 2005 when the July 7 bombings happened. I watched white anarchists flip like weather vanes from protesting against the occupation of Iraq to holding candlelight vigils. I realised then that we are not the same. That solidarity is for white people. That not all lives matter.

After many years of searching and occasionally abandoning hopes of finding organised political action, I came into contact with people of colour, first-generation US immigrants from the Middle East, Central Asia and the Pacific who, like Baldwin, felt eviscerated by America’s systematic destruction of their bodies and had washed up on the shores of Istanbul, which, as a result of the Gezi protests, was already starting to become an exciting place.

I made friends from Syria with whom I connected both on a personal and political level.  We discussed the elitism of white journalists and NGOs. We read articles by Budour Hassan deconstructing white solidarity with Palestine. It is from these people that I learned the word “cracker”, and it is also from them that I discovered Bay Area Intifada.

The word “cracker” was originally used in  the United States as a pejorative term for white people, especially poor rural whites from the South, referring to those who “cracked the whip” on plantations in order to keep African slaves in line.. My comrades and I borrowed our usage of the term from Black nationalists—and from people like Trayvon Martin—both to articulate our own demands from colonisers, and to signal that we stand in solidarity with those who have paid the heaviest price as a result of the colonisers’ lecherous greed.

We use the word “cracker” to refer to people who justify occupying a country by claiming that they are liberating it. We use it to describe those who choose to ignore pre-existing sexual harassment on their own turf, just so they can pretend that a propensity for sexual violence and melanin content are directly proportional. We use it to reclaim our struggle from the hands of those who exploit our tragedies to promote their mediocre art.

“We use the word “cracker” to refer to people who justify occupying a country by claiming that they are liberating it. We use it to describe those who choose to ignore pre-existing sexual harassment on their own turf, just so they can pretend that a propensity for sexual violence and melanin content are directly proportional.”

But most of all, we use it to refer to those who delude themselves into believing they built the affluent civilisation they guard so jealously from invading “swarms” with their own hands. When we know very well that it was built on the backs of slaves who were stolen from their homes and forced to work on plantations all across the Americas.

Why did I use it on Facebook? Because it reminded me that the crackers who claimed insurance for their “property” who drowned in unsafe ships are the same as those who refuse to carry out rescue operations in the Mediterranean in order to deter refugees from travelling to Europe. A cracker, to me, is someone who thinks that watching someone drown is cause for merriment.

If “cracker” was in fact the word that triggered Facebook’s takedown of my post, then Facebook censored the truth and denied the memory of a people’s suffering—a suffering for which reparations are still to be paid. It prioritised petty sensitivities over the suffering of the genuinely afflicted, placing the blame on those who need to remember their historic traumas in order to survive.

To us, using this word is a means of establishing bonds of solidarity across time and space. Of identifying the perpetrators of our collective subjugation. Until we take back what was stolen from us, until the day we don’t have to fight tooth and claw just to defend our right to commemorate our traumas in our own terms, crackers they are. And crackers they will remain.