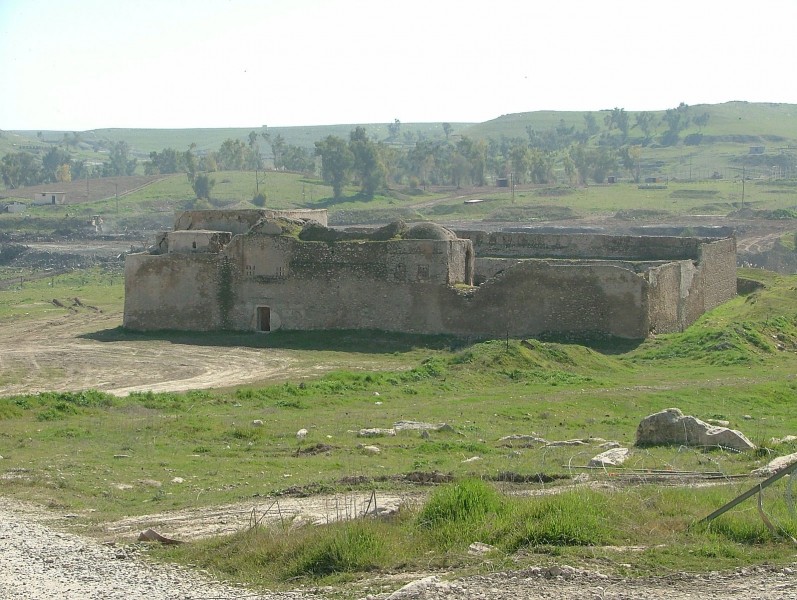 Iraq's oldest Christian monastery, Dair Mar Elia, has been destroyed by the ISIS, according to news reports released today. The monastery, known in English as Saint Elijah's Monastery, was built in 595, and is located in Ninawa, just south of Mosul, which is the militant group's stronghold in Iraq.

Although in ruins, Christian pilgrims continued to visit the stone monastery, which had a chapel and a sanctuary, as well as a neighbouring reservoir and natural mineral water springs. Satellite photographs published by Associated Press, which broke the story, show rubble where the structure once stood on a hill.

On Twitter, AP's photo editor for the Middle East Maya Alleruzzo, who is based in Cairo shares an undated photograph she had taken at Dar Mar Elia before its destruction. She tweets:

I can't describe the feeling of standing in a place that is no longer there https://t.co/coZAGeGfzc pic.twitter.com/Y4ndF3q4f2

Many others on Twitter expressed their anger and disbelief.

ISIS blows up Dair Mar Elia, the oldest monastery in Iraq. It was built before Islam. They have killed the people, destroyed buildings, and wreaked havoc in the land.

Ever since occupying swaths of Iraq and Syria, ISIS has been on a rampage obliterating all aspects of “apostasy” it comes across, destroying ancient sites among them Nineveh, Nimrud and Hatra, which are all designated or nominated to become World Heritage Sites by UNESCO. ISIS considers the veneration of saints apostasy and all those outside their definition of their narrow version of Islam as heretics.

10 historical sites destroyed by ISIS and why they matter

From the UK, James Noyes calls upon the international community to “rethink” its strategy to protect such important cultural and historical sites, particularly when international conventions in place so little to ensure their safety.

He explains his views in a series of tweets.

Once again, events like the razing of Deir Mar Elia demonstrate the ineffectiveness of the international response to heritage destruction.

UNESCO conventions don't help places like Deir Mar Elia. They are treaties which depend on peace, and are often ignored by signatories.

The use of a heritage site by a state's or an occupier's troops is a technical violation of the Hague Convention: an act of non-compliance.

And then we have the issue of groups operating today (like IS) who denounce the very premise of cultural heritage and universal value.

And so we might ask: faced with both non-compliance and non-recognition, how can Hague conventions really save places like Deir Mar Elia?

Surely there needs to be rethinking about how, in today's climate, the international community protects important cultural heritage sites.

In February last year, ISIS burned Mosul Library, destroying hundreds of thousands of books and manuscripts, some dating back 800 years.

Mosul, Iraq's second largest city fell into the militants’ hands in June 2014 and is now under the control of the group, a splinter of the notorious Al Qaeda, which is also fighting in Syria.