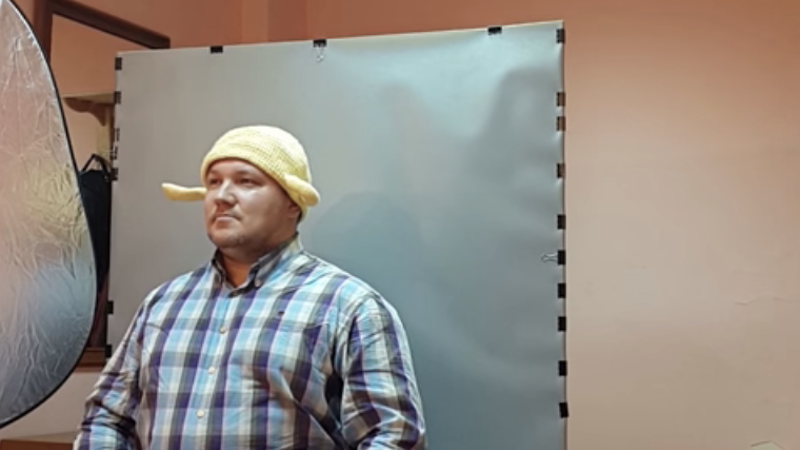 Pastafarian Andrei Filin got his wish: here he is getting his driver's license photo taken sporting a colander. Screencap from YouTube.

Andrei Filin, an adherent of the Church of the Flying Spaghetti Monster and the religion known as Pastafarianism, became the first Pastafarian in Russia who managed to get his driver’s license photo taken with a colander on his head.

The headgear, considered a mandatory attribute by the Pastafarianism community, happened to be made out of yarn, not metal, and was knitted by Filin’s wife.

Filin shared news of his success on Twitter, using the hashtag #Ramen—the Pastafarians’ noodle-themed variation on the more conventional “Amen.”

A triumph for Pastafarianism in the Russian Federation! R'amen, brothers and sisters!!! The first driver’s license with a colander in Russia! What a great day! #Ramen

Except for a barrage of questions (and some attempts at cropping out the knitted contraption), Filin did not meet with many objections while taking the photo and getting his license, as can be seen from the video he uploaded to YouTube as a kind of DIY guide for his fellow Pastafarians, documenting the process.

In the video, Filin briefly explains the tenets of the quirky religion and talks about the Russian Pastafarian community, before he describes the hoops he jumped through to get his way.

Fearing the worst, Filin came prepared for a possible battle of wills with law-enforcement officers, bringing printouts of the complete text of the Law on Freedom of Conscience and Religious Associations and the Russian Criminal Code with him.

Even though the Church of the Flying Spaghetti Monster is not officially recognized as an organized religion in Russia, the religious associations law defends the rights of those citizens whose religious beliefs do not allow them to appear bare-headed in public.

Conversely, a 2009 directive from the Interior Ministry describing the guidelines for a driver’s license look and feel allows for “photos made while wearing headgear that does not obscure the face” for citizens whose religious beliefs do not allow them to publicly go without said headgear.

A conflicting set of rules came with a new design for drivers’ licenses, approved in Russia in April 2014: these rules forbid wearing any hats or other headgear while being photographed. But it seems the 2009 directive takes precedence over the new design guidelines.

The blowback was swift: shortly after Filin’s very public triumph, the main Moscow department of the Traffic Inspectorate noticed the case going viral in the mainstream media. On January 12, its head office announced that it was looking into the photo of a Moscow citizen in “unusual headgear” and would decide if his driving license should be annulled.

Two days and an investigation later, Filin remained victorious. The Pastafarian was allowed to keep his license under one condition: he would be expected to drive only wearing the knitted colander. Caught without it, the driver would lose the license, according to the deputy head of the Moscow State Traffic Inspectorate Vladimir Kuzin. Filin himself doesn't seem inclined to follow these instructions.

Here we are. R'amen!
[…]
Internal orders of the Ministry of Interior don’t concern me. […] I'll drive in a colander, or in a cap made from newspaper, in a baseball cap. I'll do it bald or bearded.

Apart from being a die-hard Pastafarian, Filin is a civic activist and the founder of “Dvizhenie” (a Russian word meaning simultaneously “The Movement” and “The Traffic”)—a citizen project that monitors the work of traffic police in Moscow.

The Church of the Flying Spaghetti Monster was founded in 2005 by Bobby Henderson from Oregon in the US. Filin claims that in Russia, about 170,000 people consider themselves adherents of the religion. The Church states its mission as protecting freedom of choice, and cultivating critical thinking, irony and self-irony. While the followers of Pastafarianism claim to take the religion seriously, many others view it as an invented religion that serves as humorous metacommentary on organized religions, their traditions, rituals, and attire.

Niko Alm, an Austrian parliament deputy was the first Pastafarian in the world to win a three-year battle against the regulators and get a photo with a pasta strainer on his driver's license in 2011. Filin claims his knitted colander is identical in form and color to a plastic pasta strainer that Alm autographed for him during a personal meeting in 2014.