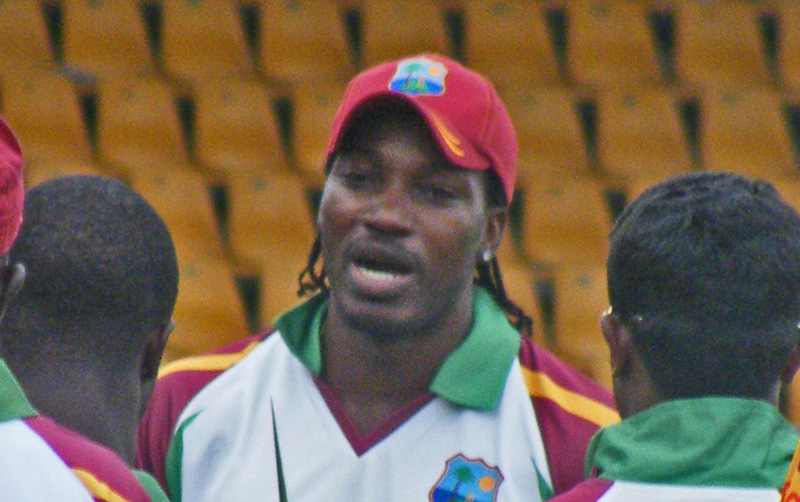 Nearly three weeks after West Indies cricketer Chris Gayle put his foot in his mouth during a live interview with sports journalist Melanie McLaughlin, Caribbean netizens are still talking about it. The incident has sparked online discussion about culturally entrenched sexism, racism in sport and whether or not Gayle was unfairly being made into a whipping boy.

The debate is still as heated as ever. Blogger Carolyn Joy Cooper, who writes at Jamaican Woman Tongue, explored what Gayle's (often self-proclaimed) sex appeal and race had to do with the whole hullabaloo.

During an interview with McLaughlin after his innings for the T20 (limited overs) cricket team Melbourne Renegades in their Big Bash League match against Hobart Hurricanes, Gayle gushed about how attractive he found the reporter. Cooper's blog post noted that Gayle was “not the first athlete to get carried away in Ms McLaughlin’s glamorous presence”:

In 2012, Australian soccer star Tim Cahill stepped up to the mike to be interviewed by the journalist and gave her a completely unexpected kiss on the cheek. Ms McLaughlin looked flustered. She was clearly taken by surprise. Perhaps she blushed. But she kept her cool. She gave a half-laugh and said, ‘OK.’ But was it?

As far as I can tell, not a bit of a fuss was made about that Cahill kiss. There was no talk of sexual harassment at the workplace. No fine. No call for a worldwide ban on Cahill. No bogus story that Cahill had exposed himself to an anonymous female who wandered into a male dressing room. Cahill is white and Gayle is black. Is that the difference in the treatment of the two athletes?

This isn't to say that Gayle was not “well out of order”. Cooper admitted that the come-on was inappropriate, adding:

What is so puzzling is that the interview started off quite professionally.

Drawing a parallel with “the story of Emmett Till”, an American black teen who was murdered for allegedly flirting with a white woman in 1955, Cooper also noted Gayle's cockiness after McLaughlin attempted to steer the interview back on a more professional course, suggesting that may have contributed to the harsh criticism levelled against him:

Gayle is lucky. He’s not likely to be murdered for flirting with Mel McLaughlin on national television. But his career might take a hit. The Australian cricketer Ian Chappell is calling for a worldwide ban on Gayle. This punishment seems completely out of proportion to the offence. Gayle made a stupid mistake. But to ban him from cricket forever?

Gayle says it was an innocent joke. I’m inclined to believe him. And he made the pass out in the open on television. It was on show! To me, this makes the flirting less troubling than it might have been in private. But the image of an athletic black man flirting with a white woman remains threatening to ‘the boys’, even in the 21st century. That seems to be the real issue.

More and more, that seems to be the bent of the conversation. On the Facebook group Wired868, sports journalist Lasana Liburd critiqued a video that was posted of various other sporting personalities making on-air passes at reporters, which insinuated that Gayle has got the short end of the stick because he is black:

…Did you realise that is a video of [Spanish footballer] Iker Casillas kissing his wife?! She was his girlfriend at the time.
Yes, he probably should not have kissed on air and she was embarrassed. But I think there is a pretty big difference to that and Chris Gayle's unwanted flirtation.
The caption under the video is startling ignorance. Mind numbing.

Liburd went on to tag his colleague in this post, Rhoda Bharath, and myself, who interviewed them both about the Gayle issue. He asked us whether we had “seen the video and what people are making it out to be”. Bharath answered:

how long and loudly am I allowed to steups? [teeth sucking, usually to express annoyance] Gayle did something that was stupid, sexist and unprofessional. Arguments based on moral relatavism not going to change that.

Jamaica Woman Tongue agreed, but also made the point that there should be one standard across the board:

Of course, sexual harassment on the job is no laughing matter. And it’s not only women who are harassed. Men are also harassed by both men and women. The workplace ought to be a safe environment in which both men and women can work in peace without fear of unwanted sexual advances.

Though the global condemnation of Chris Gayle’s flirting with Mel McLaughlin on the job seems over the top, the controversy over the incident is a welcome reminder that there are lines of propriety that should not be crossed.

I’m sure Chris Gayle will now think at least twice, if not more, about inviting any woman to have a drink with him. And certainly not on TV! But, hopefully, he will continue to enjoy the pleasures of appropriate flirting. After all, if he stopped, it would be such a waste of a deliciously sexy man.