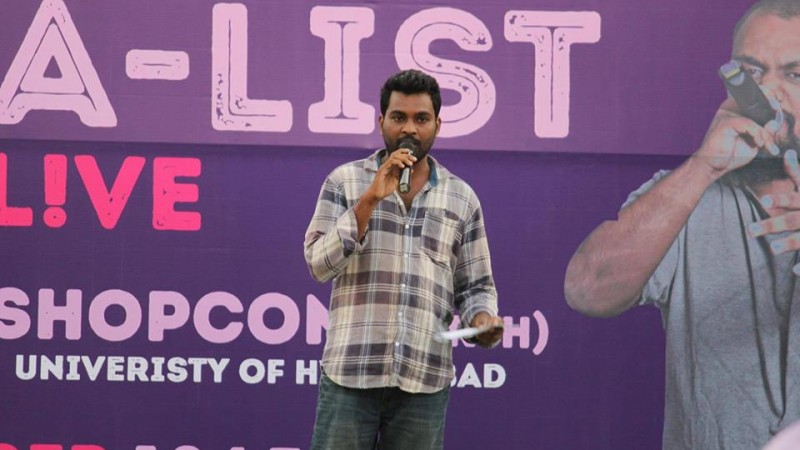 A second year PhD student from the University of Hyderabad [2] (also known as Hyderabad Central University), Rohith Vemula, took his own life [3] on Sunday, 17 January, 2016.

Protests erupted the day after his body was found hanging in a hostel room on campus, a hostel where the university had banned him and four other Dalit students from stepping foot. Rohith was a Dalit [4] and an active member of a student group that fought discrimination against Dalits, a caste historically deemed “untouchable” and discriminated against in India.

Twenty-six year-old Rohith was expelled from his hostel [5] at the university along with four other Dalit students. According to independent news site Scroll.in [6], “university authorities had barred them from entering the administrative building, hostels, libraries, mess and other common areas.” They were also banned from participating in the university's student union elections. Since they were evicted from their university accommodation, they were forced to sleep in tents on campus. Rohith's friends say he had not received his university stipend [7] since July last year.

All of the suspended Dalit students were members of the Ambedkar [8] Student’s Association (ASA-HCU). The ASA-HCU aims to build a casteless and exploitation-free society and is heavily influenced by the ideas of the late Indian social reformer Dr. B.R. Ambedkar, who opposed discrimination against Dalits.

Before he took his life, Rohith and members of other student groups had been on a hunger strike [6] to demand the decision to suspend them be reversed. The University Proctorial Board had issued the suspension order after Susheel Kumar, the leader of the local ABVP chapter, the student wing of India's ruling Bharatiya Janata Party [9] (BJP), complained in August that he had been beaten up by members of the ASA-HCU. The board’s own inquiry report revealed [10] that this complaint was not backed by evidence but the five were suspended in September. After a series of flip-flops over the months the decision was upheld in December and the students were asked to vacate their university accommodation.

Agnes Amala. T [11] at Counter Currents reported that the order to suspend the students “was an outcome of political pressure exerted by BJP Union Minister for Labour, Bandaru Dattatreya and BJP [Member of Legislative Council] Ramachandra Rao.”

One of the reasons for which Rohith and others were persecuted by the administration is that he was seriously organising campaigns and programs to highlight persecution of, and discrimination against Muslims and worked to bring Dalits and Muslims together to combat it, on campus level. If these activists are not Dalits and their fight was not against Hindutva fascism, this false case and persecution of Dalit scholars would have attracted national and international attention and outcry.

Dalit means “oppressed” and is the self-chosen political name for castes historically considered “untouchable” within the Hindu caste system. While caste-based discrimination is prohibited under Indian law, reports [13] indicate that Dalits have the least access to higher education in India compared to other groups. Apart from educational institutions, Dalits are often the target of rapes, discrimination and humiliation in India. The last decade saw a staggering 245% rise [14] in crimes against Dalits. Noted social commentators like Anand Teltumbde have constantly pointed [15] out the various ways in which casteism is still widely prevalent in India.

A history of discrimination

This incident cannot be seen in isolation. There have been other instances of discrimination on the basis of caste. Student groups that have tried to combat casteism in the recent past have had to face the ire of the authorities for being “anti-national”, “extremists” and “casteist”.

Ambedkar Periyar Circle, a student’s group that raised its voice against Brahmanical, upper caste hegemony and criticized policies of the incumbent Indian government such as the dilution of labor laws. This group was derecognized by the Indian Institute of Technology Madras, but authorities, were forced to revoke the decision [16] after massive protests, both online and offline.

Similarly, the Indian Institute of Technology Roorkee administration expelled [17] 73 students, majority of them from Dalit and other socially marginalized backgrounds, because they secured low grades. Many saw this expulsion as casteist [18] as well.

‘No country for Dalits’

Meanwhile at the University of Hyderabad, other student activists mounted a solidarity protest in the name of “We Are More Than Five [19]” ever since the students were suspended. The students initially refused to hand over the body [20] of Rohith, even as police baton-charged the crowd, arresting eight students and imposing Section 144, which makes public assembly illegal. The body was finally snatched away through use of brutal force.

A poem titled “Death of a Dalit life [21]” by Abul Kalam Azad went viral. The poem ends on the following note:

with tears,
you look,
at all the gentle eyes
whose pupils pause,
and rage,

Rohith's final letter was doing the rounds [22] on Facebook.

On Twitter, people spoke out against the injustice of Rohith's treatment by the university:

What happened with #RohitVemula [23] should not happen with anyone. We can't progress until every citizen of India has equal rights!

Activist Gutta Rohith pointed out [28] what he thought was a distortion of the facts of the case by a local news outlet.

This is how casteist Telugu media distorts the facts. Here it is written that ABVP goons ‘advised’ him not to support an ‘anti-national.’ It is also written that these people were counseled by the police for indulging in ‘violent’ behavior’. Also, they have conveniently picked portions from his suicide note. To absolve ABVP goons, Brahminical administration from the murder they have only quoted the part where he claims no one's responsibility for his death. Full of lies, distortions. This is how Telugu media works. “పెట్టుబడికి కట్టుకథకి పుట్టిన విషపుత్రికలు” ఈ పత్రికలు.

The text in Telugu is a line from a poem by someone who is considered a great poet of Telugu literature; it translates to “Can a nation of false notes and fraudulent votes be called a nation? Can a promise given by corrupt thugs be called a promise?”

There were protests going on at the time of writing this article. In New Delhi, police launched a brutal crackdown on protesters, using water cannons and injuring several people. Shehla Rashid, vice president of the Jawaharlal Nehru University Student's Union, wrote on Facebook [29]:

Inside the Parliament thana, students have been brutally beaten, girls have been manhandled by male and female police both, police officials are abusing students and beating up journalists.

Activist Kumar Sundaram shared pictures [30] of the protest and the subsequent police action.

It is clear that many activists are really angry and we may see more protests on the issue of caste in the coming days, thanks to the growing radicalization of the discourse surrounding casteism. Perhaps the following quote from Dr. B.R. Ambedkar, used in the Facebook page [31] of ASA-HCU, will become more and more relevant for Dalits in the coming days:

The number one cause for suicide is untreated depression. Depression is treatable and suicide is preventable. You can get help from confidential support lines for the suicidal and those in emotional crisis. Visit Befrienders.org [32] to find a suicide prevention helpline in your country.