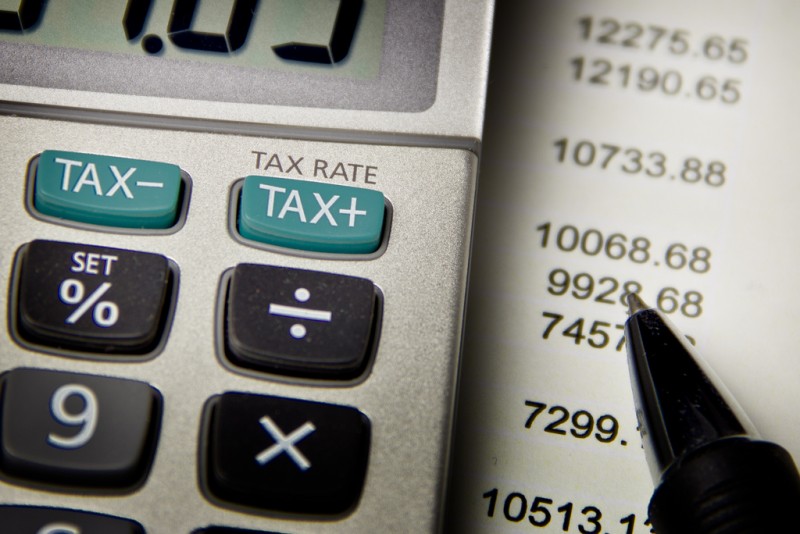 “Calculating Taxes Up And Down.” image by Ken Teegardin. CC 2.0.

Consumers’ nightmares have come to life in Trinidad and Tobago as they struggle to adapt to a new tax schedule presented by Finance Minister Colm Imbert, who says the shift is necessary to rescue the economy from its current precarious state, as oil prices continue to plummet. The previous administration‘s overspending hasn't helped matters, either.

The Finance Bill 2016 is set to remove 99 categories of items from the zero-rated list, while placing a Value Added Tax (VAT) on formerly untaxed items such as salt, books, and computers. Basic food items like rice and flour are also soon-to-be taxed, leaving many people in Trinidad and Tobago outraged.

Isn't ANYONE QUESTIONING THE PNM [People's National Movement, the party currently in government]? They lay out the law and folks just go with the flow? How bout a nationwide boycott for a day? How about a walkout? Just don't sit there and post memes about how bad the PNM is, without doing something! Stand up DO SOMETHING!

In a recent newspaper interview, Finance Minister Imbert maintained that it is the right move to add the (reduced) 12.5-percent VAT to certain items because of the low income tax rate, which has been steadily lowered—along with corporation tax rate—over the years. Ideally, a lower rate without exemptions would be optimal, but—because the rate is already low—he agrees there also needs to be an efficient VAT-collection system, designed to help run the country better. The VAT rate will be reduced from 15 percent (where it currently stands) to 12.5 percent, starting on February 1, 2016. You can view the entire list of newly taxed items here.

Taxing computers and books, which were formerly exempt, has struck a particularly sour note with Internet users. On Facebook, Christian M. Johnatty voiced his concerns about educational supplies:

Wait wait wait, ent the reason vat was removed from these in the first place, was because as a developing country, it would be more affordable and accessible for the lower income brackets to have access to computers and become computer literate?

When I read about this strange deci­sion, I was both surprised and disap­poin­ted. After all, there's a reason why books have been zero-rated ever since VAT was first introduced to Trinidad and Tobago, many years and several governments ago.

Everyone agrees that we don't read nearly enough, from children in school to students in the universities to the general population. At The University of the West Indies (The UWI), we've noticed for years now that our students’ reading skills, and willingness to tackle books as opposed to a few paragraphs on the net, have declined significantly. […]

Why then make books even more expensive than they are already? […] Recently, a sort of literary renaissance has taken place in T&T and the Carib­bean, with more local or regional authors publishing novels, short stories and poetry, and winning big awards, too, as well as interesting non-fiction books of all kinds. Do we want to reduce their market by ma­king their books more costly?

But a message will certainly be sent out: that this Government is not interested in encouraging the population, from school kids to senior citizens, to read, buy, collect and share books.

Still, not everyone in Trinidad and Tobago is against the changes, even if they do affect their pocketbooks. The Facebook page Speak Out T&T posted a link about six countries that are also preparing to begin taxing citizens for the first time, commenting:

The same people who mismanaged us into a recession are complaining about VAT. They appeal to the most uneducated in our society and make this a political issue.
Well this is a global issue. Around the world, countries are putting the same financial measures in place to help keep their economies afloat, because that is what responsible governments do.
But acknowledging that would require the ability to think. It's easier to say ‘PNM’ ‘Oh no, they taxing salt’ and ‘we go eat grass’.

Facebook user Jovi Modeste made the point that people have their priorities skewed, especially during the country's Carnival season (which is currently in swing), where overspending on “fetes” [expensive parties at which food and alcohol are included] is the norm:

Is how people complaining about the food prices, but paying for costume that cost 2-10k just for 1 day, 1200 for a 400 bottle of rum in the club…
All limited advance tickets sold out….

Prime Minister Dr. Keith Rowley addressed the nation about the reinstatement of property taxes and increases to the VAT. Commenting on FreeDom’s Facebook status, Vitas Butkoon summed up Rowley's suggestions on the issue:

Let us pay the full price for oil and food. Raise electricity rate to be on par with other countries. Let nothing in this country be subsidized. Don’t stop a tax alone. Remove welfare from single mothers and stop cepep [an environmentally focused arm of the Ministry of Housing and Urban Development that has been mired in alleged corruption] and urp [Unemployment Relief Programme]. Also tax online shopping.. Don’t let s stop at salt and rice. Increase everything.

In order for citizens to live on the country's available resources, the prime minister said, “we have to cut to suit what we have”, underscoring the fact that Trinidad and Tobago must now do its best to curtail spending.