Wendell Lira never wore Corinthians’ colours. Nor São Paulo’s, Internacional, Flamengo, Cruzeiro, Grêmio or any other big league Brazilian team with a world title on the shelf. During his nine-year career as a professional football player, Wendell played for teams such as Goiás and Fortaleza and though he had a chance at the Brazil’s Under-20 National Team, it was never enough to make a name for himself.

On January 11, 2016, however, he beat out Argentinian legend Lionel Messi for the Puskás Award for the most beautiful goal of the year, which he had scored during the Goiás state championship while he was playing for Goianésia, a national league team in the fourth division. Wendell was the only Brazilian nominated in the category and the only Brazilian awarded during the FIFA’s Ballon d’Or ceremony for the best of 2015.

When news came in November that he was in the Top 10 nominees for the Puskás, Wendell's contract with the Tombense team, which he had joined after Goianésia, had ended and he was living with his mother-in-law.

For Brazilians, still traumatized by the 7-1 loss to Germany during the World Cup hosted in their country, Wendell's win was a needed reminder of the spirit that made the world first regard their country as “the Football Nation”. As FIFA described on its official page:

It may sound like a cliché, but Brazilian football genuinely does combine technique, talent, spectacle and end product. Wendell Lira proved that once again last year with a breathtaking bicycle-kick which has been voted by users of FIFA.com and francefootball.fr as the best goal of 2015.

The Puskás were voted through an open online poll. Wendell’s bicycle kick received 46.7% of the 1.6 million votes. Messi, from Barcelona, ranked in second place with 33.3%, and Alessandro Florenzi, from Roma, in third with 7.1%. And here is where the Internet enters the story: the unknown Wendell Lira had the help of a handful of Brazilian sites to get the trophy, especially from one site called Não Salvo.

With a little help from my friends

A screenshot of a FIFA video showing Wendell's goal for Goianésia that earned him the Puskás.

The site is known for its humorous content, but also for being a master prankster. In 2014, during the World Cup in Brazil, a mocking video created by Não Salvo went viral and was republished as real news by several news outlets such as The Wall Street Journal, Yahoo News and BuzzFeed. The story? North Korea’s government was supposedly editing images and telling its citizens the national team was heading to the World Cup finals against Portugal.

But this time, it wasn’t a prank. Cid — Não Salvo’s creator — sent his followers an actual, serious call to arms to help Wendell Lira, “an unknown Brazilian player”, to win the FIFA’s Puskás Award and defeat football's “consecrated” giants such as Messi. Soon, the campaign was embraced by other sports and comedy websites in Brazil. And it worked. 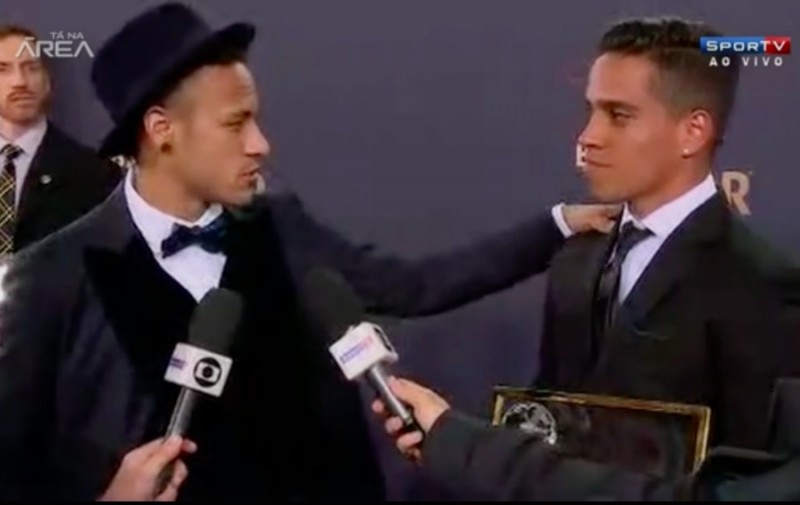 A screenshot of a YouTube video of Neymar and Wendell during the ceremony.

For the entire month of December, Brazilians voted tirelessly to carry Wendell from the Top 10 nominees to the three Puskás’ finalists. Wendell’s sudden fame even guaranteed him a proper suit to go to the award’s ceremony, offered by a tailor from his hometown Goiânia, Goiás.

Barcelona’s Neymar, who also won a Puskás while playing for Santos FC in 2011, praised Wendell’s accomplishment:

I said it was like a “karate kid” kind of thing (the goal style). I don’t know where he got that maneuver from, but it was a great goal. He deserves it.

Wendell is the Brazilian reality of football

When his name was announced, Wendell and his wife cried. The commentators broadcasting the ceremony live immediately remarked that “his bank account wouldn't ever be the same.” You see, Wendell doesn't exactly fit the mold of the multimillionaire society that attends FIFA’s events.

During his speech he remembered the Biblical passage of David facing the giant Goliath and joked:

First, I’d like to thank God for this unique moment in my life. And for being able to be here and to meet great players, my idols, that I’ve only known from video games. Today, I’m here, meeting them in person.

Wendell, now 27, was the typical Brazilian kid who dreams about playing football and becoming one of the idols they impersonate on PlayStation. The tough reality of that romantic dream, though, is that the large majority of these kids end up enduring poor working conditions “to not give up on the dream” — as Wendell did.

While playing for Goianésia, the team he was with when he scored the Puskás goal, Wendell received 3,000 reais a month (close to 750 US dollars) to support his family. Almost three times the minimum wage in the Brazil, but less than Brazilian football star Neymar’s one-hour payment when he arrived in Barcelona in 2014.

His path to the Puskas award wasn't exactly easy-going. Earlier in his career, he suffered major injuries while playing, and at one point had to spend 10 months away from the pitch to recover from a knee lesion. In 2012, his contract with the Goiás team wasn't renewed, and Wendell had to work as a waiter at his mother’s diner to pay the bills. He almost gave up football, but friends and family encouraged him not to lose hope.

He played for different teams in the years afterward, and had received offers from low-level local teams before his Puskás nomination. But his win has pushed his career to new heights — he has received an offer from a new club, from the second Brazilian division, to play with in 2016. If an offer from a European team comes his way, though, Wendell said he could change his plans.

In an interview for a local newspaper from Goiânia, Wendell explained how difficult it can be to make a living off of football:

This footballer’s life is really hard. I’ve always said that if I had a profession that could guarantee my wage at the end of every month, it would be way easier. But, when I’m out of work, I try to get by. Because, whether or not I have a job, my daughter still needs to drink milk, I have to buy her diapers. 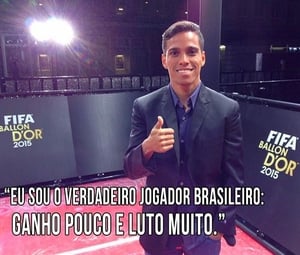 “I am the real Brazilian player: I earn little but I struggle a lot.” Image tweeted by @BomSensoFC.

The majority of professional football players in Brazil find themselves in this same situation.

This is one of the causes that athletes movement Bom Senso FC has highlighted for the last two years, as Global Voices reported in 2013. But there's been little to no change so far. Quoted by the movement, Wendell said:

I’m like 90% of the country’s players who have to train in bad fields, suffer to find a team, struggle to pay the bills” – Wendell Lira

In a time where billionaire transactions, corruption and merchandising steal attention, Wendell’s underdog, Rocky Balboa-like victory helps remind football fans what the game is about, as football commentator Douglas Ceconello wrote on his blog:

In spite of our mania of grandeur, of the hypnosis for when the Champions League theme plays, we do not live football for the World Cup final, we don’t even live it to see Messi or for the luck of cheering on the best squad ever. Actually, we live football waiting for a Wendell Lira.