Will Lebanon Finally Have a New President After Geagea Endorsed Aoun? 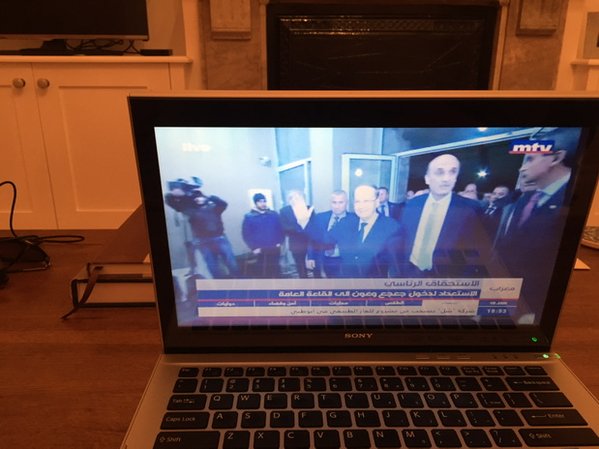 “Hell is freezing over,” quips Anthony Elghossain (@aelghossain) as he watches the Aoun-Geagea agreement playing out on his computer. Photograph shared on Twitter.

Lebanese Forces leader Samir Geagea announced his endorsement of his war time rival Michel Aoun‘s candidacy for presidency today. The agreement could mean Lebanon may finally have a new president after leaving the country's top post vacant for 20 months.

Geagea, the executive chairman of the Lebanese Forces, the second largest Christian political party in Lebanon, and Aoun, former Lebanese Army Commander and founder of the Free Patriotic Movement, were enemies fighting each other during the Lebanese Civil War (1975-1990). On January 31, 1990, Lebanese Army forces with Aoun as its commander-in-chief clashed with the Lebanese Forces, after Aoun had stated that it was in the national interest for the government to “unify the weapons” which meant that the Lebanese Forces must submit to his authority as acting head of state. This fight led to the death of hundreds of civilians.

To further complicate matters, Geagea is reportedly supported by Saudi Arabia, while Aoun, has the backing of Hizbullah, which is backed by Iran. While this endorsement brings Aoun closer to the presidency, it does not guarantee him an automatic position, as he still needs the backing of Walid Jumblatt, the head of the Progressive Socialist Party, in addition to the backing of Hizbullah, which Aoun has. He should also try and get the backing of other parliamentary blocs, including that of former Lebanese Prime Minister Saad Al Hariri, who heads the March 14 movement, and who is backing Suleiman Frangieh‘s bid for president. In Lebanon, the president must be a Maronite Christian, but he must still be elected by parliament.

Confused? You are not alone. Join all those netizens who share their confusion.

Lebanese politics can be confusing, as Fouad Khreis explains:

To add to the confusion, Ziad Achkar tweets:

Anybody in Lebanon can you fill me in with what's happening? #Aoun #Geagea # Lebanon https://t.co/fSrc4gIpQo

And Foreign Policy Middle East editor David Kenner, who is based in Beirut, delves into old newspapers to dig up more information about the arch rivals:

26 years after this article, these two guys kissed and began a fresh alliance, because Lebanon. pic.twitter.com/F28wpfqW96

Man, I am going back and reading the Geagea-Aoun coverage from 1990, and it is just bonkers. pic.twitter.com/jof4ZVUUlu

Many are stunned with the announcement.

And Lina Arabii shares THE moment:

The Free Patriotic Movement with the Lebanese Forces.

How come the writers on Game of Thrones are not of Lebanese descent? #Geagea #Aoun

did any of the new year's astrologers predict this nomination?

Back to Achkar, any solution seems to be welcome:

I'm not a fan of either Geagea or Aoun but any move towards reconciliation ought to be welcomed. We can't live like this anymore.

The reconciliation between Geagea and Aoun is even welcomed by Lebanon's infamous singer Elissa, who tweets to her 8.2 million followers: