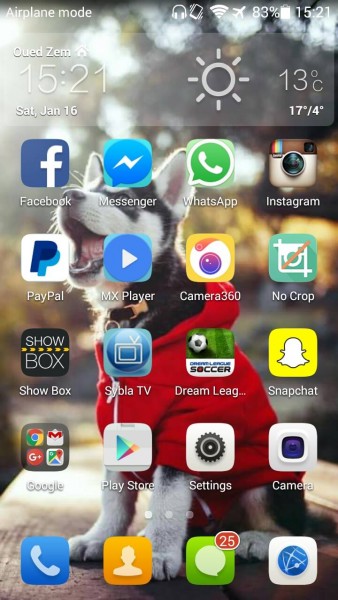 Moroccans switched off their phones yesterday and today to protest a ban on VoIP services. Many users, like Othmane Haikouma, opted to turn their phone to airplane mode for the duration of the boycott. Photograph from Othmane's Facebook page

Morocco's telecom providers have banned free VoIP calls, including those on popular platforms, Whatsapp, Viber, Facebook and Skype, saying the services breached their regulations. The move has angered citizens who have called for a two-day boycott of telecom companies in protest against the block.

Moroccan Amine Ragheb took to Facebook to call for boycotting those “greedy” companies whose only way of dealing with competition is blocking services. In a video he shared on his page, which has been viewed more than 484K times so far, he warned the companies that if they do not change their stance, customers will escalate their move:

“We are customers and not sheep and you cannot cut off any services of the Internet because the Internet is a free space, free of charge, and no one has the right to control it. Today, you have cut off all VoIP services on Whatsapp and Skype and others. You are muzzling us. This is an invitation for all Moroccans to switch off their phones on January 16 and 17. This boycott is just a warning and to test the waters and see if Moroccans are united or not. If telecom companies do not go back on their decision, we will escalate. I personally will not use the phone and not pay the bill. Let them cut off the phone service.”

While some comments on the video, which has been shared 14K times and liked 19K times, were in favour of the boycott, others were not optimistic such a boycott would work.

One reader, Ahmed Sellami, even comes up with another suggestion:

Perhaps I have a better suggestion since it is very difficult to give up using the telephone. We should all move to one company (out of the three telecom providers) and force the other two to go bankrupt. In this case, the two companies will work on a solution. Let's make the big guys fight amongst themselves.

Meanwhile, some Moroccans aired their complaint on Twitter. Dutch Moroccan Boutaïna Azzabi, a multi-media journalist based in Istanbul, Turkey, tweets:

#Morocco has stopped calls made through mobile internet connections, the ban on Skype, Viber&WhatsApp calls will apply to 3 mobile operators

Local media in #Morocco are speculating whether security controls were behind the VOIP ban.

Tried calling my aunts in #Morocco via Skype and Whatsapp…#fail. Guess the ban has been implemented. No more internet calls

Others showed their solidarity with the boycott campaign with many opting to turn their phones to airplane mode for the duration of the boycott.