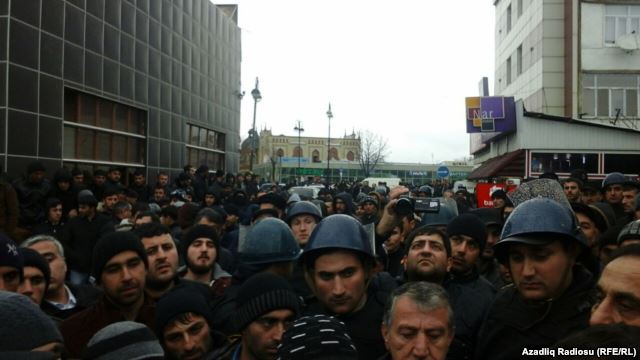 Protest in Guba, Azerbaijan. Photo by Azeri Service of the RFE/RL

Hundreds of people across Azerbaijan have been gathering in city centers and in front of government buildings demanding jobs and protesting against price hikes, devaluation and soaring unemployment. The country, which has enjoyed a certain level of economic stability thanks to its oil-dependent economy, is now experiencing tougher times thanks to the slump in global oil prices, which have now reached less than US $30 per barrel.

The unrest comes amid the sudden crash of the local currency, Manat, which devalued first in February 2015 and then once again in December 2015 by almost a third, as the country shifted to a floating exchange rate. Added to the steep decline in oil prices and the country’s extravagant spending on projects like the European Games, it is becoming evident that Azerbaijan can no longer sit back and depend primarily on oil revenues.

Residents of several districts, including Fizuli, Agsu, Aghcabedi, Siyazan, Quba, Sumgayit and Lankaran, were angry and frustrated, taking to the streets and calling for immediate attention to be paid to their poor living conditions.

A 38-year-old internally displaced man climbed onto the top floor of a five-storey building, ready to commit suicide, saying that he could no longer afford even bread for his family. Netizens were sharing stories of the protests on Twitter:

Government responds with gas and guns

Protesters seemed taken aback by the government's reaction. Riot police and internal troops used tear gas and rubber bullets to disperse the protesters and arrested dozens of them — including opposition leaders, some of whom were suspected to have organised the demonstrations. In the Siyazan district alone, police arrested more than 50 people for “illegal marches”.

Azadliq Radiosu (Azeri service of the Radio Liberty) reported that Popular Front party chief Nazim Hasanli, and Musavat party local branch chairman Iman Aliyev were detained in Lankaran. In addition to opposition leaders, some prominent members of the opposition parties were also detained. Despite their pleas of innocence, detainees were sentenced to different terms, up to one month in jail, for taking part in unlawful protests.

Videoblogger Huseyn Azizoglu, known for his short, critical videos which he shared via the Three Faces (Uc Uz) Facebook page, was also detained in Baku and sentenced to 15 days in jail. Two days after Azizoglu’s arrest, according to this tweet, all the videos illustrating the way in which the Azerbaijani police dealt with protesters were deleted from his YouTube channel:

Huseyn Azizoglu’s videos about police were deleted from Uc Uz page. Everything is clear [smiley]

In an interview with Azadliq Radiosu, Agil Abbas, parliament member from Agchabedi, said there was nothing to worry about and that people were actually sabotaged:

Now everything is fine there. People said their piece, government officials heard them and they all talked about measures to be taken after this [referring to a meeting which took place between protesters and city officials]. Already, taxes for flour were lifted. I can honestly tell you, there is also a little bit of sabotage here. Basically, some are playing with people's feelings. Even the residents told us this. There is crisis in the whole world right now. And also in Azerbaijan. But we shouldn't go around making a big fuss out of it.

One side looks for food; the other looks for perpetrators

While the authorities sought out potential traitors via the opposition parties and religious groups, protesters kept telling media they organized the marches at no one’s initiative but their own:

There is nothing to get by with. There is no bread. People are protesting price hikes, unemployment, increased prices of food products. And today, they brought in internal troops and equipment, carrying out arrests. This is how things are at the moment. People were protesting difficult living conditions and yet they faced arrests.

Fearing more anger and upheaval in other regions, the government sent internal troops to patrol the regions of Guba and Sheki — but the move did not prevent Guba residents from raising their voices too.

Instead of going for negotiations with protesters, the authorities send armed police and internal troops. This is the worst they can do. It also shows that even in this critical situation, the authorities are unwilling to go for a dialogue with people. The problem is that that the violence leads to more violence. I think it is dangerous game with severe consequences of spiraling totally out of control.

Shops, restaurants, cafes, bars, car dealerships, and even small groceries are being closed, one by one, amid the ongoing crisis which is making it practically impossible for them to continue to do business.