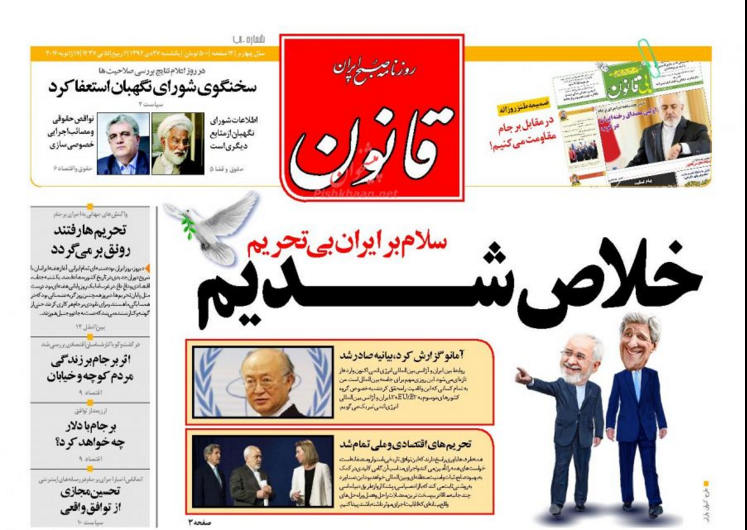 The Sunday, January 17 cover for Iranian reformist newspaper Ghanoon states: “Hello to a Iran without sanctions: We are relieved.”

This past Saturday was implementation day for the removal sanctions agreed upon during the nuclear negotiations between Iran, the P5+1 and the United States in July. This is a short overview of the events of a changing day in Iran.

Iranian Foreign Minister Javad Zarif started the historic Saturday off with a tweet around 9 am labeling the day with the hashtag #ImplementationDay.

It's notable to mention other hashtags related to the news around the implementation of the Joint Comprehensive Plan of Action (JCPOA) included #IranDeal, #JCPOA and برجام# (or “barjam,” the acronym for JCPOA in Persian).

Upon his arrival in Vienna on Saturday morning, Zarif explained to the press the plans for the day, including meetings with Frederica Mogherini, the high representative of the European Union for Foreign Affairs and Security Policy, and US Secretary of State John Kerry before awaiting the International Atomic Energy Agency report confirming Iran's compliance with the conditions set out in the JCPOA for Iran's nuclear facilities.

#Iran FM Zarif upon arrival in Vienna: Today #JCPOA will be implemented w #IAEA DG issuing its report & then a joint statemnt will be issued

Sometime around the scheduled talk between Zarif and Kerry, unforeseen news started to circulate amongst American and Iranian news outlets of a prisoner swap between the two nations.

It soon became clear that a deal had been agreed upon for the release of four Iranian-American dual nationals imprisoned, including Washington Post journalist Jason Rezaian, former US Marine Amir Hekmati, pastor Saeed Abedini and the larlgely unknown Nosratollah Khosravi-Roodsari. A fifth American without dual nationality was later announced to be Matthew Trevithnick, a student who was detained a few months ago.

In exchange, the US agreed to release seven Iranians in American jails (Nader Modanlu, Bahram Mechanich, Khosro Afghahi, Arash Ghahraman, Touraj Faridi, Nima Golestaneh and Ali Sabounchi) mainly for the crimes of violating US sanctions against Iran, with one exception in a prisoner extradited from Turkey on charges of hacking into a US company.

An article by Robin Wright in the New Yorker published a few hours after the prisoner exchange explained that the swap was part of a secret secondary round of negotiations that occurred alongside the nuclear negotiations:

The initiative grew out of nuclear negotiations, launched in the fall of 2013, between Iran and the world’s six major powers. On the margins of every session, Wendy Sherman, the top American negotiator, pressed her Iranian counterparts about the American cases. The Iranians countered with demands for the release of their citizens imprisoned in the United States for sanctions-busting crimes. More than a year of informal discussions between Sherman and her counterpart, Majid Takht Ravanchi, the Iranian Foreign Ministry official in charge of American and European affairs, led to an agreement, in late 2014, that the issue should be handled separately—but officially—through a second channel.

The swap came on the heels of Iran's release of the US Navy sailors who were held captive after wandering unauthorized into Iranian waters. Many have attributed the fast release of the sailors to warmer relations between Iran and the US in the midst of the finalization of the JCPOA.

Implementation day also coincided with the 37th anniversary of the day the former Shah left Iran before the beginning of the Islamic Revolution. The irony of the historic day was not lost on Iranians.

Many Iranians were sharing altered versions of iconic images of signs stating, “The Shah left”, changing them to, “Sanctions left.”

37 years after the 37-year reign of Mohamed Reza Shah, we are finally celebrating the end of sanctions! Do you know where we could possibly be in 37 years?

In the midst of the impatience to hear the official announcement that sanctions had been lifted, Zarif urged his followers on Twitter to be patient, describing the diplomatic meetings delaying the announcement as “nothing serious.”

We're getting to #ImplementationDay. Nothing serious. Diplomacy requires patience, but we all know that it sure beats the alternatives.

One of the finalizing moments of Implementation Day came with the announcement by the International Atomic Energy Agency (IAEA) that Iran had abided by all conditions set out by the JCPOA on Iran's nuclear facilities.

This was a process largely confirmed in early December when the IAEA released an assessment report, based on four years of research, that concluded there was no evidence that Iran has tried to develop a nuclear weapon since 2009. The Implementation Day confirmation was a result of an assessment by the IAEA's 35-nation board to decide whether to close the case on Iran's nuclear program based on the earlier findings.

The joint press statement between Mogherini and Zarif officiated the lifting of the nuclear sanctions around 10 pm, which was followed by a separate statement by John Kerry:

The final conditions of the sanctions removal were documented by the American Department of Treasury, including which sanctions have been removed by the US, and which still remain in place (particularly related to human rights and terrorism).

While previous steps in the nuclear negotiations were received largely by jubilant celebrations in the past, Implementation Day seemed to be more of a quiet affair, as it became finalized late Saturday night (Sundays are work days in Iran), and occurring according to the plans set out last July.

In reaction to the final announcement, Iranian newspapers prepared headlines for Sunday morning playing on the famous “Shah is gone” headline from 1979. President Hassan Rouhani was also quick to take to social media to share his joy towards the lifting of sanctions.

#ImplementationDay–I thank God for this blessing & bow to the greatness of the patient nation of Iran. Congrats on this glorious victory!

The president's Instagram account also featured an edited version of a dramatized 2013 campaign interview in which he promised his government of “prudence and hope” would hold the key to solving the nuclear issue, removing sanctions, and creating a booming economy.

.@HassanRouhani has reposted video of his main election promise, lifting the sanctions and solving the nuclear issue https://t.co/NDDqDJhfAJ

Critical reactions throughout the day pointed to the fact that Iran should also endeavour toward national reconciliation following the momentous international one. Calls for the release of Iranian prisoners and to improve human rights were amongst the sentiments shared on social media.