The Victims of Mexico's Drug War Deserve to Be in the Spotlight, Not El Chapo and Sean Penn 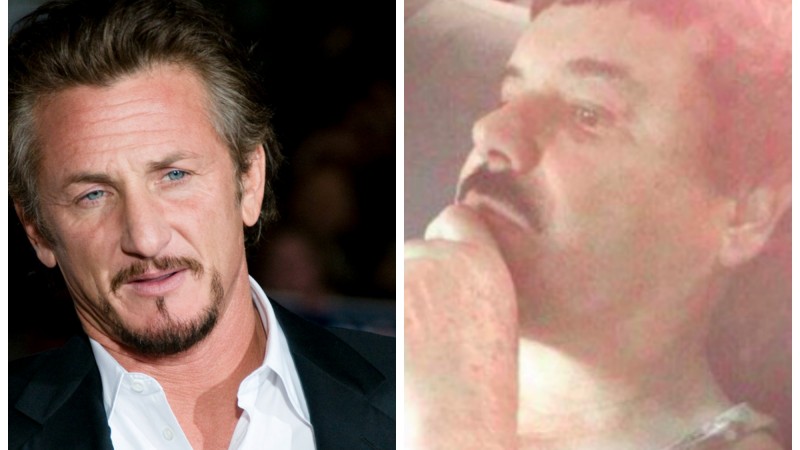 American actor Sean Penn (left), who interviewed the Sinaloa cartel leader, Joaquín El Chapo Guzmán, ignited a media firestorm around journalism ethics that buried who should be really the center of the story: the victims of the drug war.

Joaquín “El Chapo” Guzmán, considered until recently one of the most wanted drug dealers in the world, once again dominated headlines in Mexico and the United States — as well as elsewhere in the world — when he was arrested by Mexican security forces for the third time on January 8. Besides his previous sensational prison breaks, the revelation of his secret meeting with actors Sean Penn and Kate del Castillo while still on the run fueled the buzz even more.

These three have become stars of the story, stealing away attention from who really deserves it: the victims of the war on drugs.

Poet and Mexican activist Javier Sicilia spoke about this in an interview for NBC News:

The face of El Chapo is a smokescreen. Behind the kingpin's image, which is magnified by the media and the politics of Mexico and the United States, is the hidden truth… of the dead and those who are still disappearing.

At the center of the media firestorm is Sean Penn's debatable journalistic merit and the murky ethics of allowing Guzmán, who heads the Sinaloa drug cartel, to approve the interview before publication in Rolling Stone magazine. The professional and citizen journalists who risk their lives every day covering the drug trade and corruption in Mexico have never themselves enjoyed such intense public awareness. In the last decade, more than 80 journalists have been murdered and 17 have disappeared according to Reporters Without Borders.

Pity that Sean Penn didn't ask #ElChapo about Mexico's missing and murdered journalists, many of whom were victims of drug cartel attacks

The same can be said of the 164,000 dead civilians and approximately 22,000 missing persons during the drug war, in which El Chapo has undoubtedly been a key player.

@charlierose ask Sean Pensky why he didn't interview family members of victims that have been killed by El Chapo in cold blood.

The Rolling Stone profile presents a generally sympathetic view of Guzmán, saying that he only uses violence when its “advantageous,” “unlike many of his counterparts who engage in gratuitous kidnapping and murder”. Regarding the gangster's sweetened image, writer and journalist León Krauze wrote in the post “El Triunfo de Joaquín Guzmán” (Joaquín Guzmán's Triumph) on his blog Letras Libres (Free Words):

Thus El Chapo turns out to be a family man who visits and loves his mommy, who cares for his kids and dreams of enjoying his retirement years in his Sinaloa home place. Who became a drug dealer because he needed to make a living somehow, who is not violent unless it's self-defense, who hasn't harmed Mexico. A drug dealer, like many others, who doesn't take drugs and only drinks if a lady is around, who doesn't resort to violence even it is for escaping, and who “is not looking for trouble in any way”. A gentleman who gives friendly hugs and smiles all the time. A good man if it wasn't for the ten thousand murders the Sinaloa Cartel has been accused of and the millions of shattered lives caused by drug trafficking in 50 countries around the world.

The war against organized crime in Mexico is far from over, even though one of the most notorious drug dealers of recent years is once again behind bars. Nor is the humanitarian crisis of hundreds of internally displaced left behind after the operations carried out by the Mexican government to find El Chapo and who were not taken into account when President Enrique Peña Nieto declared “mission accomplished”.

One of the people displaced is Martha's, who had to abandon her house in the El Verano community after Mexican marines raided it on October 6, when they were allegedly looking for the runaway criminal. Her story was recounted in the radio program “Sin casa por El Chapo” (Homeless because of El Chapo) by Cadena Ser:

We were somewhat afraid because they (the marines) were threatening us, telling us that if we went out of our houses they could shoot at us, and if we took our vehicles they could throw some kind of explosives at us, and that they were not responsible for us.

[…] we are staying with family and friends, but most are refugees in shelters.

People from other communities, like El Limón, had to leave walking. It took them three or four days (to reach Cosalá for refuge)

[…] the ranch is empty, the animals are starving to death. In fact, the community is desolated.

The Mexican government hasn't announced any type of compensation for people like Martha who have lost everything. In contrast, authorities boasted and celebrated Guzmán's re-capture. Anchorman and comedian Víctor Trujillo, known for playing a creepy clown character named “Brozo”, criticized the president's behavior:

The same way as it is unforgivable that he ran away, it is unforgivable how they celebrated. They wanted the matter to be so heroic that they even sang the National Anthem. It seemed like “El Chapo” Guzmán's apprehension automatically ended the violence that the country has been experiencing for 20 years.

In the same interview with NBC News, activist Javier Sicilia asked Sean Penn and Kate del Castillo to use their fame to tell the story of the victims, and he added:

[…] only when the names of those who were killed are known, when the stories of their suffering are heard, and multiplied by the thousands, people everywhere will call out to end the war.