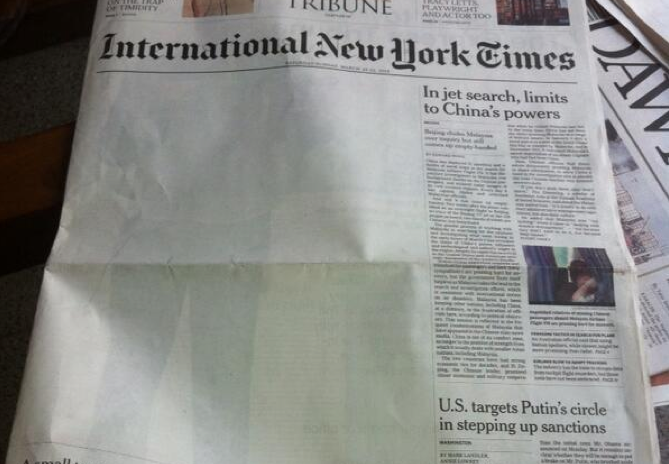 Front page of International New York Times on March 21, 2014, when a story on Osama Bin Laden was omitted. Photo by Aysha Raja, shared on Twitter.

Pakistani printers removed a front-page story titled “Imperiled Bloggers of Bangladesh” from the 2 January 2016 edition of the international version of The New York Times, leaving blank spaces behind.

The printing partner of New York Times in #Pakistan removes an article. Readers get white spaces on two pages pic.twitter.com/ccjFvWtorj

This is what the Asia edition of New York Times actually looks like today, without the censor in Pakistan pic.twitter.com/SqFRejdu2s

The article describes the killings of Bangladeshi bloggers who write about secularism, atheism, human rights and civil liberties. It begins by profiling Asif Mohiuddin, who survived a stabbing attack in 2013 and was soon after imprisoned for his progressive writings. His story is similar to those of numerous other Bangladeshi bloggers who have been targeted and sometimes killed after being singled out and accused of “atheism” by religious hardliners. Atheists have the same rights as all other citizens in Muslim-majority Bangladesh, but the country's secular government has nevertheless done little to discourage the attacks or bring the killers to justice.

The fact that the front-page story was removed in Pakistan by the Express Tribune, the printing partner of The New York Times, created a stir on social media. Many pointed out that this censorship is nothing new in Pakistan.

Don't get it. Why would the Pakistan edition of NYT censor an article related to the death of bloggers in Bangladesh. Help, anyone?

@HaticeAVCI_ @nytimes actually not the first time. It's almost a daily occurrence. @salmanmasood

Some even compared it to authorities’ iron grip on media during the rule of General Muhammad Zia-ul-Haq from 1978 to 1988:

Blank columns of the NYT reminiscent of the Zia era #Pakistan #censorship https://t.co/SwVNrUfKSl

Shortly after, The New York Times published a statement providing a note from the printers on why they had chosen to leave the story out. The note was brief:

We are compelled to remove the article appearing on front page and page 2 of the [International New York Times’] Saturday Jan. 2-3 2016 as it contains comments on the Quran and Prophet Muhammad that can cause serious offence to our readers.”

The New York Times’ public editor Margaret Sullivan wrote that the newspaper was not given a chance to contest the article’s removal.

I was somewhat relieved that they had removed the article: in Pakistan, where being a journalist or a writer or a blogger can get you in a lot of trouble, nobody needs to be given ideas about slaughtering us to silence us.

‘Say no to censorship in all its forms’

Indeed, this is not the first time a major story has been removed from the local print edition of the New York Times. In March 2014, a Times story on Pakistani authorities’ possible knowledge of Al-Qaeda leader Osama Bin Laden's whereabouts was censored, and the front page was left almost entirely blank.

Self censorship?: The Intern. NYT in Pakistan, minus @carlottagall ‘s story on bin Laden pic.twitter.com/Y1ayRnsEkR [Photo by @aysharalam]

A month later, an opinion piece on blasphemy by Ali Sethi also “disappeared”, again leaving a conspicuous empty space behind. In response, Bina Shah wrote about how censorship was being carried out by media outlets themselves, not by official order from the government:

You might think the Pakistani government ordered this to be done, but no, the newspaper's editors took the decision to do this all on their own. Right now, things are bad in Pakistani media… very bad. With the fate of GEO, the country's biggest television channel, hanging in the balance, charges of blasphemy against senior media personalities, and an all-out war against the Jang Group in which all media houses have taken sides like pirañhas [sic] scenting blood in the water, the Express Tribune probably decided they didn't need any more trouble, and so simply cut the piece out in the crudest way possible. The last time they did this was over the Carlotta Gall report about the whereabouts of bin Laden.

In the past few years, authorities in Pakistan have been heavily criticised for the ad hoc manner in which content is blocked online. Although much debate on the issue has focused on the government's ban on YouTube, the blocking of Al Jazeera and BBC's website has also raised concerns about the state of freedom of information in the country. The Express Tribune newspaper in particular came under scrutiny after an ex-employee revealed the ways in which political pressure shaped their coverage.

In this instance, the act of censorship reflects a dark, crude reality for speech in Pakistan. As Shah put it:

It's an empty gesture given that the article is available online, but this blank space in the newspaper speaks volumes about the conditions under which we live and write in Pakistan today. Say no to censorship in all its forms, because only when information flows freely is any country truly free.