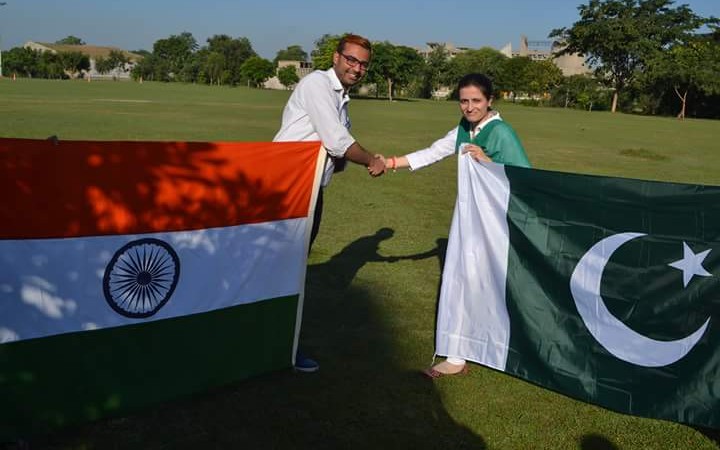 Tweet by Vivek Krishna Tiwari (@vivek6749), law student: “The need of the hour is peace, but unfortunately there ar[e] elements trying to deviate us fr[o]m this path #aaghazedosti”

India and Pakistan have never had an easy time getting along with each other throughout their six decades of living side by side in developing South Asia. Political strife and media spin have rendered palpable commonalities obscure and encouraged people to see their neighbours across the border as their enemy.

But various groups and individuals have made efforts to promote understanding and friendship to bring about enduring peace, such as the Indo-Pak Peace Calender, which features paintings by students in both countries. The fourth edition was launched at the Islamic Cultural Centre in New Delhi on 10 January 2016.

The event was organized by Aaghaz-e-Dosti (A Start of Friendship), an organization which is working to ease strained ties between India and Pakistan. The group operates through a core team of more than a dozen members together in India and Pakistan.

A history of delicate relations

India and Pakistan were once one. But in 1947, the British divided the territory into the Dominion of Pakistan (later the Islamic Republic of Pakistan and People's Republic of Bangladesh) and the Union of India (later Republic of India) primarily along religious lines as an answer to tensions between Hindus and Muslims in the then sub-continent. People on both sides of the border were forced to migrate, and the divisions stoked riots and violence.

The peace that was expected to be brought about through partition of the Indian sub-continent, however, remained elusive. Time and time again, the neighbouring countries fell into conflict. Moreover, a border dispute involving Kashmir and attacks by militant groups only served to worsen the mutual suspicion and heighten mistrust.

Peace activists on each side of the border have lived a cycle of renewed optimism, only to see some new diplomatic slight or armed skirmish dash their hopes. Most recently, when Indian Prime Minister Narendra Modi broke his journey from Afghanistan to India for a sudden halt at Lahore, Pakistan, towards the end of 2015 to meet Pakistani Prime Minister Nawaz Sharif, it brought a ray of hope to peace activists. Given that it had been a little over a decade since an Indian prime minister had visited Pakistan, Modi’s visit brought a lot of optimism to the future of peace-building between the states.

But like so many times before, the path to peace came upon an obstacle. On 2 January, a group of heavily armed men attacked the Indian Air Force base at Pathankot. Kashmir-based militants claimed to be responsible for the violence, but that didn't stop some from suspecting the worst of neighbouring Pakistan. Indian Chief Minister of Punjab Parkash Singh Badal, along with Deputy Chief Minister Sukhbir Singh Badal, issued a statement terming the attack as an attempt by Pakistan to destabilize Punjab threaten India's unity and integrity, although Pakistan itself has condemned the attack.

‘Crush these fences and let's meet with love’

In times such as this, Twitter witnessed a heartening flood of good will under the hashtag #AaghazeDosti, the same as the organization that coordinated the peace calendar's launch.

#AghazeDosti #aghazedosti Hatred between Pakistan and India has expanded scope of proxy wars and economy of war at the cost of people. — Khadim Hussain (@Khadimhussain4) January 8, 2016

Crush these fences and let's meet with love #AaghazeDosti pic.twitter.com/k6qZgllDTF

India and Pakistan are sister nations.. We have so much in common.. A united India-Pakistan will be better for everyone :) #AaghazeDosti — Hayan! (@Hayan_khann) January 8, 2016

Since when has #war been a solution? after war, #dialogue is held so why dont we have that before and the only way? #aaghazedosti #indopak

Until when our generations will live in wilderness & hatred. We r mockin ourselves in eyes of world if we continued like this. #AaghazeDosti — Asad Shehzad Khan (@asadshehzadkhan) January 8, 2016

India and Pak both allot the maximum money in Defence budget. Both are the worst performing nations in human index. Time for #AaghazeDosti — Abbas Haider (@abbas_haiderr) January 8, 2016

It often takes human connections to forge peace, as Namra Nasir, the coordinator of the Lahore chapter of Aaghaz-e-Dosti, explained while recounting her experience visiting India:

This memorable excursion broke many stereotypes and brought me to a verge of thinking that if compared with the rest of the world, we are very recognizably similar, equally welcoming and extremely loving. […]

Vividly, ‪‎peace‬ and ‪‎humanity‬ is the priority on both sides of the border. I earned so much love in India that I forgot that I wasn’t in Pakistan.

The prolonged political unrest between India and Pakistan comes at a cost to both the states, significantly taking a toll on their resources. Hoping against hope that public opinion would influence political decision-making in the future, citizens haven’t shied away from expressing their desire for peace, not only as a matter of political urgency, but also for the sake of centuries of friendship—born out of communal cohabitation—before hostility took over. Will their leaders listen?