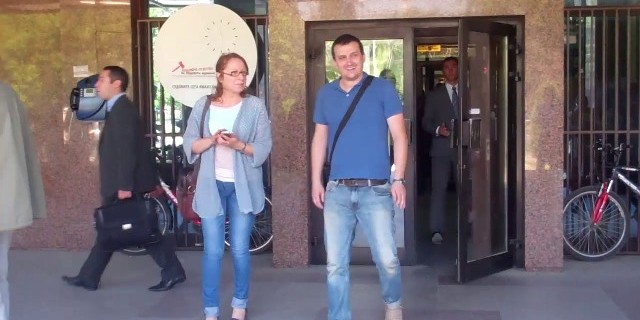 Editor-in-chief of Fokus magazine Jadranka Kostova and journalist Vlado Apostolov coming out from court hearing in May 2013. Video screen grab from A1on.mk.

Even though he’s now a former head of the Macedonian Secret Service, Sasho Mijalkov seems to still wield a big influence on the judicial system in the country, especially when his “honor and reputation” is question.

The Constitutional Court in Macedonia confirmed a fine of 8,300 euros levied against two journalists from independent magazine Fokus, Jadranka Kostova and Vlado Apostolov, for defamation or “violating the honor and reputation of the former head of the secret service” — who is also a cousin of the outgoing Prime Minister Nikola Gruevski.

This was the third time that Macedonian courts have confirmed the sentence for quoting a source who said Mijalkov was involved in corruption. The first degree court set the fine for the journalists at the beginning 2014, the Appellate Court confirmed the ruling in September 2014 and the Constitutional Court refused the journalists’ appeal in November 2015.

The Constitutional Court in its decision stated that the lower degree courts correctly found that there were no grounds for excluding the responsibility of Apostolov and Kostova. The court then stated that the published stories did not contain information of public interest but had intention “to spread rumors, which seriously violated someone's honor and reputation”.

Kostova, who is editor-in-chief of the magazine, had to pay 5,000 euros, and journalist Apostolov was fined 1,000 euros. In addition, they both must cover the court expenses of 3,300 euros, which in total adds up to 8,300 euros.

The former head of the secret service, who resigned due to other corruption and misuse of power allegations made by the opposition, sued Fokus in January 2013. Fokus published several stories with statements by Igor Ilievski, Macedonia's former ambassador to the Czech Republic, in which he accuses Mijalkov for corruption.

Although the journalists asked Mijalkov for his reply to the allegations, he refused to participate in an interview and then sued.

In October 2014, the Association of Journalists of Macedonia called on all journalists and citizens to show solidarity with Fokus journalists and help fundraise the amounts set by the courts for the investigative pieces they published.

Other civic organizations like the National Network against Homophobia and Transphobia of Macedonia organized a fundraising event in Skopje Old Town on October 14, 2014, to aid Fokus in covering the defamation fine and cover court costs. 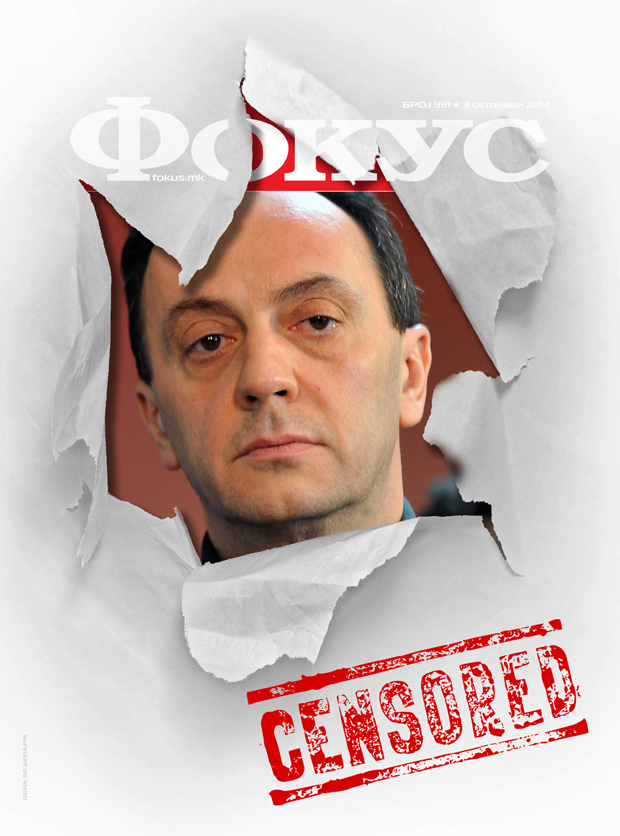 The case was highlighted as an instance of media intimidation by UN Rapporteur for Freedom of Speech Frank La Rue in June 2013. Individual journalists, the Association of Journalists of Macedonia, the Journalists’ Trade Union, Reporters without Borders, and other organizations interpreted the rulings as a clear warning to media, and many confirmed the “chilling effect” this has had over Macedonian journalists.

Nikola Mladenov, the publisher and editor of Fokus, was found dead in a car accident on 27 March 2013, under murky circumstances. After the accident, Fokus daily and weekly magazine stopped publishing. The weekly magazine resumed publication in July 2013.

Mladenov’s death was mentioned in the so-called “bombshells” — leaked wiretaps illegally recorded the by Secret Service run by Mijalkov — that the country's political opposition published during 2015. That particular “bomb” revealed conversations among top Macedonian politicians, including former Minister of Interior Gordana Jankuloska, her deputy Ivo Koteski, and Prime Minister Gruevski's chief of cabinet Martin Protuger, indicating that officials interfered in the investigation and organized harassment of journalists mourning Mladenov's death. As a consequence, opposition leader Zoran Zaev and the Association of Journalists of Macedonia issued demands for the investigation to be reopened.