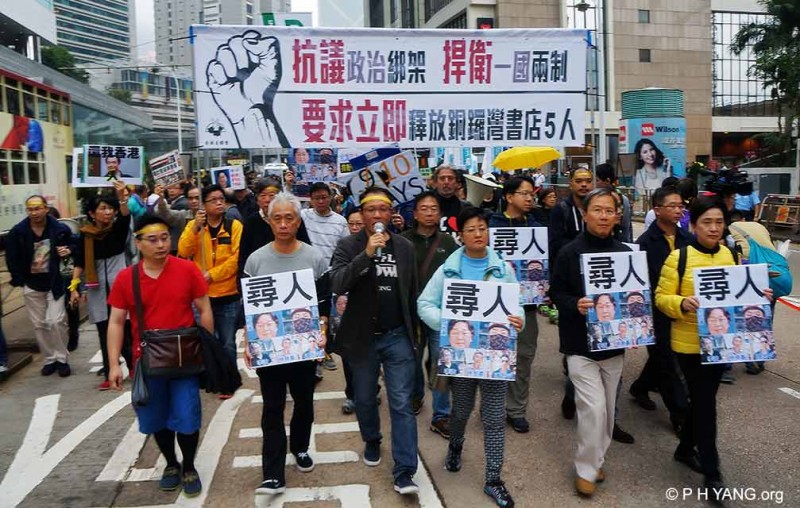 Thousands rallied on Sunday demanding the release of the missing five booksellers. Image from PH Yang.

Thousands of protesters rallied on Sunday, 10 January, demanding the release of missing five booksellers who were believed to have been abducted by mainland Chinese authorities because of their publishing work critical of the Chinese Communist Party.

In addition, a number of influential community leaders from the political, legal and art sectors spoke out in a viral video titled “Disappearance of Lee Bo… Disappearance of Hong Kong”, calling for international attention on their disappearance.

The video explains the alleged cross-border abduction of Lee Bo, who disappeared December 30, becoming the fifth person from a bookstore specialising in publishing and selling literature banned in China to disappear in so many months, has violated the “one country, two systems” principle and hence the very safety of people in the city.

Under the Sino-British Joint Declaration, which was signed in 1984, then British colony Hong Kong would continue under a capitalist system and enjoy a high degree of political, legal, economic and cultural autonomy once it was handed back to mainland China. However, with the disappearance of Lee Bo, the city's constitutional protection seems to have also disappeared — evidence indicates that Lee may have been illegally kidnapped to mainland China without travel documents to “assist an investigation”.

Hong Kong police made an inquiry with mainland Chinese law enforcement authorities, but so far there isn't any official explanation for the disappearance and whereabouts of the five missing booksellers.

Instead, a handwritten letter by Lee Bo that was reportedly faxed to one of his colleagues suggests that he entered mainland China voluntarily by himself to assist an investigation. Another letter together with a video, in which Lee urges the public not to make a fuss about his disappearance, were also released via pro-Beijing media outlets.

‘Maybe one day we will be taken away’

In response to the perceived threat, thousands of protesters led by over ten pro-democracy legislators rallied in Hong Kong on 10 January.

“He was detained, his freedom [was] lost, fell under the control of the strong authorities, he is now being manipulated like a dough,” Lew Mon-hung, a former member of Chinese People's Political Consultative Conference, told independent online news Hong Kong Free Press during the rally. Lew said he joined the rally “so that the whole world will know Hong Kong people treasure the civil rights granted by the Basic Law, and the freedom from fear.”

As explained in the “Disappearance of Lee Bo… Disappearance of Hong Kong” video, the incident is not only about Hong Kong, but the safety of those who are living and working in this international city. As Gregory Wong, a local actor said in the video:

I do not know how bad or how worse it can get. In the future, what can we say and what we cannot say in the public, or to a friend, or even in a phone about the Chinese government, about the Hong Kong government, about the leader of Hong Kong Mr. CY Leung or with regards to anything that is remotely or directly related to politics. I mean, maybe one day we will be taken away just because we are not happy about the political system.

At least two of the missing booksellers carry foreign passports. Gui Minhai, the owner of the bookstore, is a Swedish citizen and Lee Bo is a British passport holder.