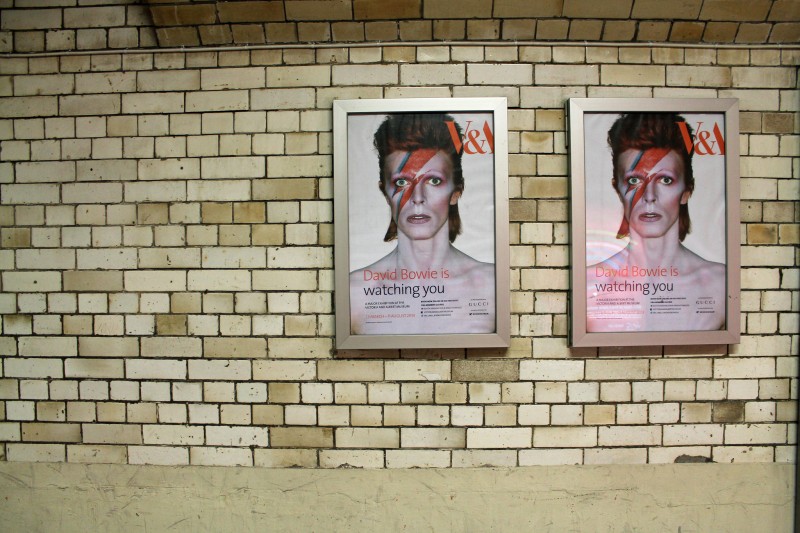 “Bowie is watching you” — posters for the David Bowie exhibit at the V&A. Photo by Sarah Stierch, CC 2.0.

The Caribbean, like much of the rest of the world, woke up to the news that musician David Bowie — that temporal creature who morphed seamlessly from androgynous Ziggy Stardust to elder rock statesman — had died after an 18-month battle with cancer, just two days after his 69th birthday.

The overwhelming reaction to his death on social media throughout the Caribbean is testament to the magnitude of Bowie's talent and the ways in which his music — always creative and original — defied geographical and racial lines. Most Caribbean netizens were blindsided by the announcement, since his illness wasn't common knowledge. Trinidad and Tobago-based Internet user Patricia Worrell admitted that “the news really hit me with absolutely no preparation”, while Rhoda Bharath wrote on Facebook:

I can't with this today.
My first musical icon.
Transitioned.
RIP Bowie.

Compatriot Natasha Ramnauth, like many other netizens throughout the region, was stunned:

Noooooooooo. The Thin White Duke has gone to the long sleep, thanks for the music Mr. Bowie.

Trinidadian musician Corey Atheleny Wallace, who is now based in the UK, posted a link to Bowie's new album and wrote:

2 days after his birthday and new album release the legendary David Bowie passes on to the ether. May your soul find peace, rest and music in the next dimension. Thank you for your amazing legacy Sir Bowie. A master till the very last moments in this plane. Big blessed love.

In a telephone interview, Nigel Thompson said that the outpouring of appreciation for Bowie's music might have something to do with the fact that people felt connected to him and his message, adding, “You don't get the same level of connection with today's artists”. On Facebook, he also praised Bowie's originality:

Before sampling, before drum machines there was simply music….. RIP David Bowie ……

Growing up in our era, Bowie was a guiding light — an assurance that you could claim the freedom to express your individuality.

All us teenage weirdos felt that way: He ‘Looked Like Someone from the Same Planet as I Did’ https://t.co/ACsZ9UOBUw via @thedailybeast

Rose-Marie Ingrid Lemessy-Forde posted a video of Bowie and Freddie Mercury performing their duet “Under Pressure” and admitted:

I listened to this with awesome sadness. Another of my favourite singers gone. RIP David Bowie. Maybe you and Freddie Mercury will be making music together wherever you are😢

His career was so wide and deep and his ability to reinvent himself so many times make him a truly timeless artiste.

In Jamaica, Annie Paul was irritated by the fact that some radio DJs couldn't even get the legendary singer's name right:

However, most netizens appear to understand not only the pronunciation of his name, but also the fact that Bowie's influence transcended music — he made an impact on film, fashion, and the art world, and enjoyed toying with cultural and social norms. Facebook user Franka Philip said:

Interestingly I spoke about David Bowie last week in the context of Jaden Smith and womenswear. I pointed out that Bowie had been there, done that decades ago.

Many Facebook users, grasping for the words to express their grief, ended up quoting Bowie's lyrics, from both his final album and earlier works.

There was a very dark, disturbing time in my life when I was purging records left, right and center […] But for some reason, and I’m not sure why, I never got rid of Bowie. […] 2005 and I put on ‘The Rise and Fall of Ziggy Stardust And The Spiders From Mars,’ which I hadn’t listen to in a while since it wasn't my favourite. At then end of Ziggy is a song called ‘Rock and Roll Suicide.’ I don’t think I have the words to describe hearing it but I’ll say this. Everything I hated about myself at the beginning of that song, became everything I loved about myself at the end of it. Sure it wasn't that instantaneous, but every time Bowie sang ‘you’re wonderful, give me your hand,’ I felt like there was an actual person pulling me from wreckage and not letting go. I wish I could write more, but I can’t stop crying. This man was everything to me. Hot tramp, I love you so.

Caribbean netizens also found solace in retweeting and sharing of posts from outside of the region — it seemed to be a way to bond with other grieving Bowie fans across the globe. Rhoda Bharath shared this photo of a sign on the London Undergound, adding: 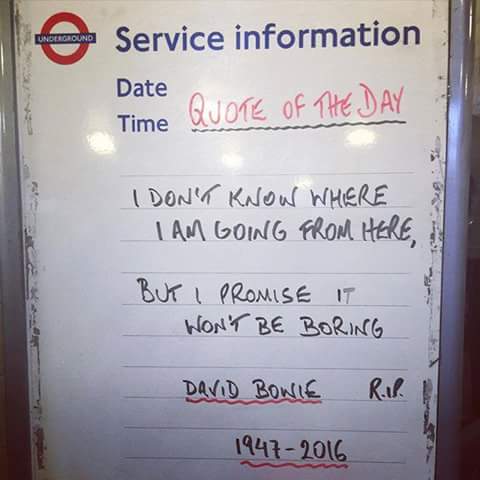 “Thank you for taking risks”

We went to the David Bowie retrospective on the last day it was open in Chicago. […] It was packed. We shuffled in a tight crowd from exhibit to exhibit, and it was overwhelming but so worth it. To see his brilliance. Those costumes. The influences he drew from. The way he changed music and then segued into film. Brilliant. Nobody else will ever be like David Bowie. I can't believe he's gone.
Thank you for taking risks and showing the world what a risk taker could do.

In an interview with Global Voices, Yursik discussed the strong regional reaction to Bowie's death:

I wasn't surprised at the universal reaction […] but the Caribbean reaction was thrilling and reassuring in a different way. Growing up in Trinidad, it wasn't always easy to discover older music in different genres and I sometimes felt like a teenage misfit listening to The Beatles, Paul Simon and David Bowie. You have to seek it out. I love that so many of us did, and we are all feeling the loss.

She also felt that Bowie translated so well to the Caribbean because “his music was about pushing boundaries and creating new personas”:

I always thought he would love our Carnival, especially the heyday of theatrical mas by Minshall.

Finally, British-born Lara Quentrall-Thomas, who lives in Trinidad, posted a tweet that has been widely shared — although apparently wrongly attributed:

If you're ever sad, just remember the world is 4.543 billion years old and you somehow managed to exist at the same time as David Bowie.