It's David v. Goliath, as Citizens of ‘Europe's Greenest’ Region Take On an Italian Energy Giant 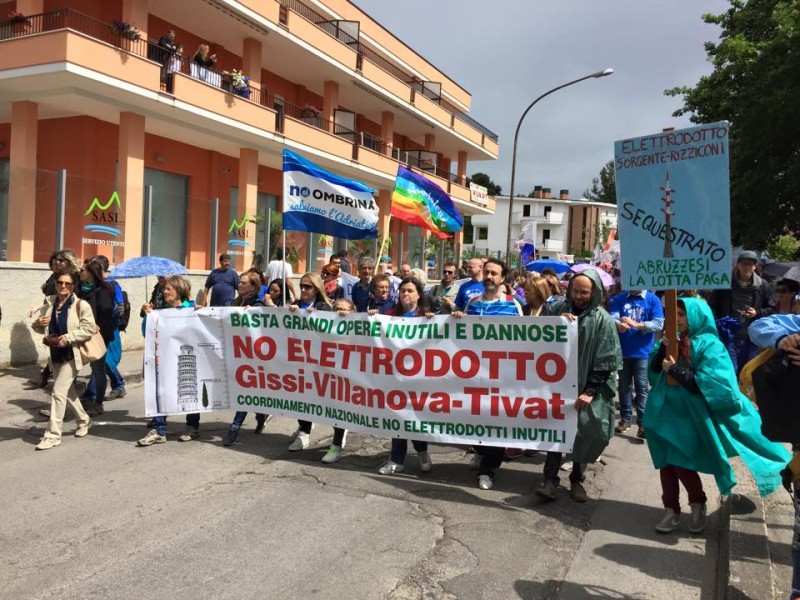 “Down with useless and harmful mega-projects,” reads the banner carried by No Elettrodotto protesters. Image from the No Elettrodotto 380 kV Villanova-Gissi Facebook page.

Silvia Ferrante leads a quiet life. Five years ago she moved from Rome back to her father’s house in the countryside. There, with her partner, they dreamed of raising their son, Libero (Italian for “Free”), in close contact with nature.

But on November 29 last year, the 37-year-old Italian mother became the protagonist in a nightmarish David vs. Goliath-style legal battle, when the Italian energy company Terna SpA, part of the Enel group, slapped her with a 16 million-euro lawsuit.

Silvia was among about 50 landowners and “No Elettrodotto 380kV Villanova-Gissi” activists against whom Terna SpA issued civil summons and filed criminal charges. The activist group was created in 2010 to raise awareness and organise opposition to a rather secretive project being undertaken by Terna, Europe’s biggest grid operator and the sixth in the world in terms of electrical grid size. The company accused Silvia of delaying the plans for implementing a transmission line, allegedly by violently opposing land seizures on 24 different occasions. Silvia received 24 separate requests of indemnity from Terna for allegedly interrupting public service operations. 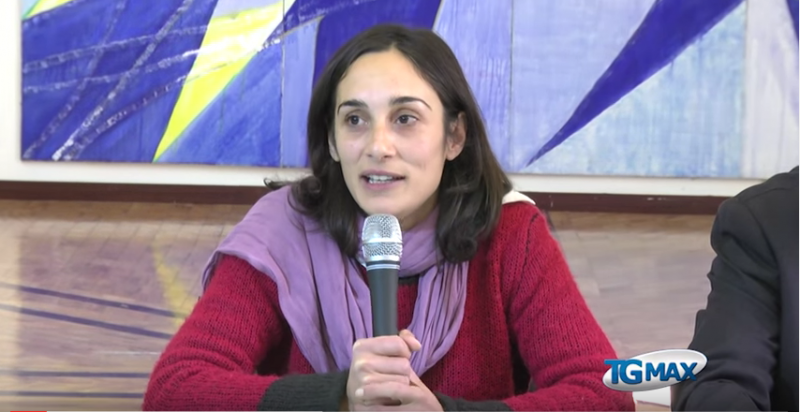 Activist Silvia Ferrante, defendant in the 16 million-euro legal action brought by Terna SpA, at a press conference. Screenshot from a video by Telemax.

The contested transmission line mega-project cuts through the provinces of Chieti and Pescara in Abruzzo, the central Italian region known as “Europe’s greenest”. One third of Abruzzo’s territory is composed of national parks and protected nature reserves.

At a press conference on December 2, Terna’s actions were described by the mayors of the municipalities of Lanciano, Castel Frentano and Paglieta as “an arrogant and intimidatory act to scare off the citizens who opposed a disputed project”, according to Italian news outlet ANSA. The three mayors filed appeals, pending the regional administrative tribunal, against the project’s authorisation.

On the same day, Terna asserted in an official note that their legal actions constituted “due procedure”, claiming their “fundamental” project could not be delayed and that not only the company, but “everyone” was being harmed in the process, as Abruzzo suffers from a “32% energy deficit”.

But Silvia is no saboteuse. In solidarity with the landowners in the area, Silvia Ferrante, from the beginning, was trying to inform the public about the expropriations which Terna started in 2014.

“The contested transmission line mega-project cuts through the provinces of Chieti and Pescara in Abruzzo, the central Italian region known as “Europe’s greenest”. One third of Abruzzo’s territory is composed of national parks and protected nature reserves.”

“My mere presence as a witness: is that violence?” she said in a phone interview. “As a concerned citizen, this rather tastes of intimidation against dissent.”

In the interview Silvia was careful not to employ primitivist rhetoric, while at the same time criticising what she calls “reckless consumerism”. “We should always ask how is energy is produced, distributed and managed,” she added, “and how to minimise impacts and waste.”

Italy is the site of the world’s first geothermal power station, which was built in Tuscany in 1911. In 2014, however, renewable energy sources such as wind (5.4%) and solar (8 %) remain underdeveloped. Italy is a net importer of electricity, mainly from Switzerland and France, and its main power sources are natural gas and hydroelectricity.

After a series of blackouts in 2003, the most serious in 70 years, the measures taken to combat the production deficit were to promote energy importation and create “interconnectors” to enable energy to flow between networks, specifically international connections between electricity and natural gas networks.

Abruzzo is the destination for an inter-connector project being undertaken by Terna Plus, Terna’s international business offshoot. The project will involve a 1 billion euro undersea electrical cable linking the Balkan coastline to a new 380kv, 70km “electrical highway” crossing 16 of Abruzzo’s municipalities and distributed along 19 cables supported by pylons as high as 80 metres, or taller than Pisa’s famous tower. Dubbed “clay-footed giants”, a third of the pylons are projected to be situated in areas of high seismic and hydro-geological risk. 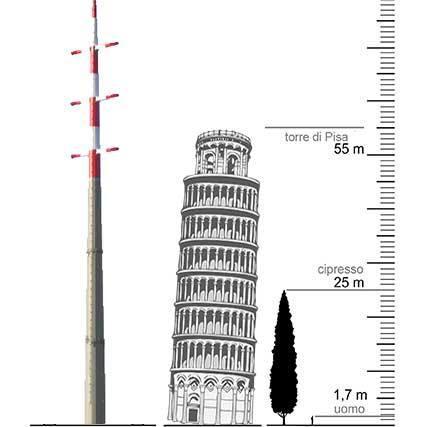 The No Elettrodotto group's Twitter avatar compares the height of Terna's proposed transmission pylons with that of the famous tower of Pisa.

A broader struggle for the defence of common goods and territories

The “No Elettrodotto” committee collected facts and testimonies, and together with other groups produced around three dossiers on the matter. Their complaints have to do with energy and infrastructure issues, legal and technical procedures, environment and health impacts. Referring to the same statistics as Terna, but over a longer time span, the activists claim energy consumption in Abruzzo is declining due to economic crisis, energy saving and efficiency norms, and that power plants in the region should already be able to produce and distribute enough energy.

They criticise Terna as well for investing only 1% in maintaining existing infrastructure, compared to the 1 billion allocated for new transmissions construction, the highest tension of 380kv. In the last snow accidents, many medium and low tension lines were taken down.

Activists point out that 55 out of 151 pylons sites are projected for land that is hydrogeologically unstable, and where, in some cases, there are active landslides. They warn about Poggiofiorito methane storage, 157 Million cbm of capacity, as close as 200 metres, ignored by the administrative environmental assessment. They shed light on bureaucratic and legal irregularities regarding the lack of documentation and discrepancies between what was planned and what was ultimately constructed. Single-shaft pylons, for instance, stand tall in areas where the plans showed the trellis version. And they voice displeasure with the Terna’s failure to commit to citizens’ participation and unfair refund deals.

Many have also voiced health concerns regarding “elettrosmog” and the risk of childhood leukaemia, especially the landowners who were officially prohibited from standing below the lines for more than 4 hours a day.

Terna’s seemingly vexatious litigation against Silvia Ferrante’s family might in fact be a threat linking to a broader struggle. On December 4, environmental organisations as Legambiente and the World Wildlife Fund asked Terna to “resolutely step back” and let “politics intervene and demonstrate once for all that Abruzzo is not a no-man’s-land.” “No Elettrodotto” became a nationwide movement that brings together dissenters from Tuscany, Marche, Veneto, Sicily and Sardinia. Both citizens, governmental and environmental authorities have increasingly protested, appealed and petitioned in the past years.

Throughout Italy many movements and committees have arisen to coordinate, inform and engage for the defence of common goods and territories. During the Paris Climate Conferences (COP21), many criticised the Italian government’s “Sblocca Italia” (Unlock Italy) proposal, dubbing it “Unlock Hydrocarbons”, as its provisions would ease the way for drills and incinerators.

Although they feel threatened, Silvia’s family does not want to leave. They would rather stay and fight to protect their territory, resources and people against illegitimate or harmful projects. “They are degrading Abruzzo—“Europe’s lungs”— reducing it to a mining district,” Silvia said. “Italy is becoming Europe’s corridor, a hub transporting energy from south to north, [from east] to west.” 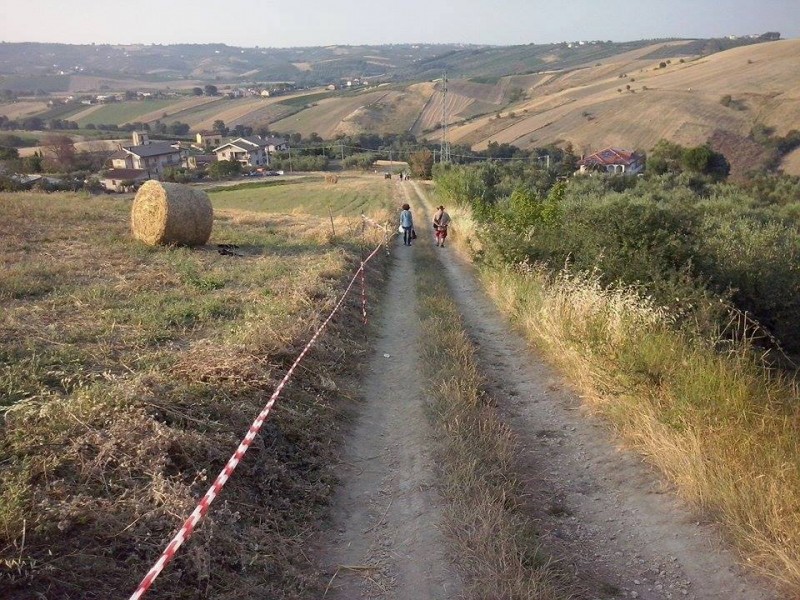 “They are degrading Abruzzo, ‘Europe's lungs.'” Photo from the No Elettrodotto 380 kV Villanova-Gissi Facebook page.

Terna had plans in place to activate the transmission line by December 30, 2015, rushing against adverse legal proceedings like elsewhere in Italy, but were later reported to have said they would activate the line progressively, with completion scheduled for the end of January. Two transmission-line projects have been blocked by the State Council: the Udine Ovest–Redipuglia in 2015, and Dolo–Camin in 2013. Will 2016 be the year business triumphs over socio-environmental dissent? Or will it be a turning point in the movement for the protection of common goods?

“It’s not anymore just an environmentalist concern,” Silvia said, “since it involves how we invest and take care of the things that allow us to live, thinking about which economic systems are able to value such resources without depleting them.”

Stories like Silvia’s are increasingly common, and they speak critically to global models of development. What unites such struggles is the appeal for deep participation and attentive human and environmental impact assessments of economic and political decisions, or lack of thereof. It’s not energetic, but rather a deficit of proper governance.

Andrea Cangialosi has a training in IT, philosophy and sociology, and an interest in struggles for emancipation and planetary conditions. He has been published by ​​Jungle​ ​World (German), ​​RioOnWatch.org (English and Portuguese). He tweets at @AndreaCangialos.