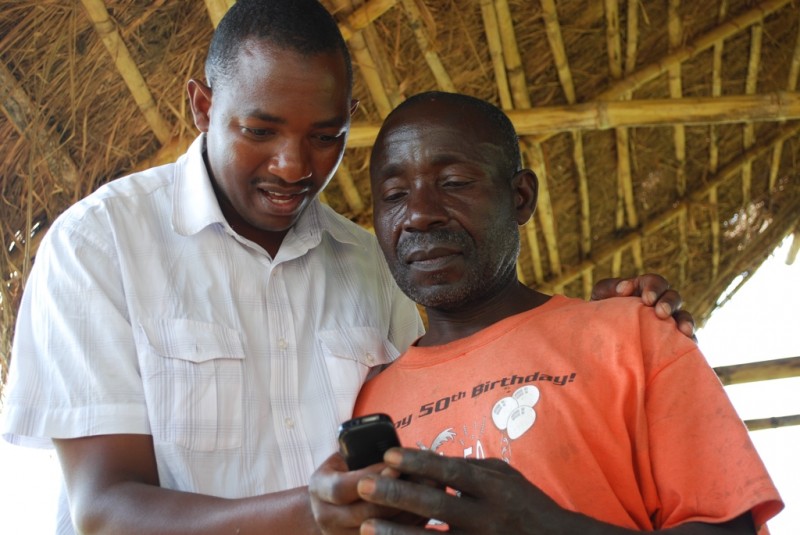 A trainer showing a farmer how to use the SMS Platform. Photo coutersy of WeFarm

Despite massive advances in technology, the majority of farmers in Africa do not know how to use a smart phone. Few of them go online to research about a new species of crops or how to fight a new crop disease.

A new startup, WeFarm [1], intends to empower farmers with information by using the Short Messaging System (SMS). Farmers ask questions which are translated and shared with farmers in the same region and beyond. Once feedback is generated, it is then sent back to the person who asked the question.

Some of the countries already benefiting from the Startup include Uganda [2], Kenya and Peru with over 43,000 users [3] worldwide in the first nine months of its operations. It will be launched in Tanzania, Cote D'Ivoire, India, Colombia, and Brazil in the near future.

In a blog post on National Geographic [4], they shared a story of a farmer in Kenya, and how he benefited from the startup:

This is precisely what happened to Kepha from Baringo, Kenya. After receiving advice from fellow farmers, Kepha managed to save 27 of the 52 chickens he owned.

Kepha’s chickens are very important to him. Not only do they provide eggs for his family to eat, but they’re also his main source of income. Kepha can sell chickens to other farmers or at markets when he has the opportunity to visit one. He also farms vegetables and staples that he and his family can eat, but his chickens allow him to earn a modest living.

Kepha’s story will resonate with many small-scale farmers across Africa, Latin America and Asia.

A blog post on Takepart refers [5] to We Farm as:

Wikipedia for farmers, or as its founder describes it, “Internet for people without Internet.”

Nicki Briggs feels this is an initiative that benefits not just the farmers but also the food industry:

While Disrupt Africa [9] listed WeFarm as one of the Startups to look out for in 2016.