Mexico Recaptures El Chapo Guzmán. But Is it Mission Accomplished? 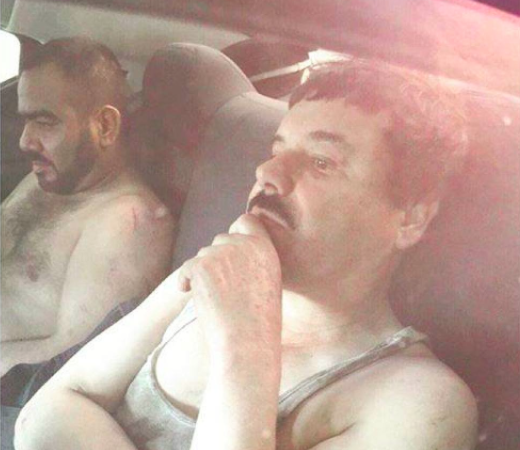 Image shared on social media allegedly of Chapo Guzmán after being captured.

For the third time, Mexican authorities have captured one of the most wanted drug dealers and powerful men in the world: Joaquín Guzmán Loera, aka ‘El Chapo’. Guzman Loera is accused of organized crime, crimes against public health and several murders.

The arrest took place in Los Mochis, a coastal city in his home state of Sinaloa, after a shootout with Mexican marines that claimed the lives of five gunmen and left an officer wounded.

A rocket launcher, weapons and armored vehicles were confiscated.

At least two Mexican marines had died in clashes with El Chapo's men since the beginning of 2016 while according to some estimates the country's ‘drug wars’ have claimed more lives than conflicts in Iraq and Afghanistan combined in recent years.

El Chapo made his second prison break through a 1.5 kilometre tunnel dug from his shower on July 11.

His first escape was from the Puente Grande jail in 2001, supposedly in a laundry cart.

Mexican President Enrique Peña Nieto, whose credibility had taken a hard blow after the drug lord's most recent escape, announced the arrest on his official Twitter account.

Mission accomplished: we have him. I want to inform all Mexicans that Joaquín Guzmán Loera has been arrested.

The United States is demanding Guzman Loera's extradition for the smuggling of cocaine, heroin and methamphetamines.

Washington even offered a $5 million reward for information leading to his capture, trumping the $3.8 million the Mexican government had already offered.

On September 9 the Mexican attorney general's office said in a statement that since Guzman Loera has been recaptured “extradition [to the U.S] proceedings should begin.”

Meanwhile, the US Drug Enforcement Agency's spokesman Lawerence Payne affirmed that “it is a great day for justice and the objectives of Mexico and the USA.”

DEA is extremely pleased at the capture of Chapo Guzman. We congratulate the MX Government and salute the bravery involved in his capture

The arrest is a significant achievement in our shared fight against transnational organized crime, violence, and drug trafficking

Malcom Beith, a journalist who wrote a book about the drug lord, told USA Today:

Catching Chapo again now gives Mexico a great opportunity to either try him quickly and fairly and make sure that if found guilty he remains behind bars – or extradite him and prove that US-Mexican relations are just as strong as ever.

Don Winslow, author of El Cartel, published a series of tweets with his conclusions on the arrest:

The Attorney General of Mexico has repeatedly stated El Chapo will not be extradited to US. I believe him. Was likely part of deal w/him.

President Enrique Pena Nieto saying “missing accomplished” is about as credible as when George Bush said it about Iraq. Same silly line.

El Chapo: 1 A deal was cut. 2 The “raid” (like the tunnel) was theater 3 Surrender & no extradition to USA. Mex prison will be like hotel

Considering it is the third time El Chapo has been arrested, many people expect a repeat of his previous escapes.

On Facebook, Juan Herroz made reference to the recent infamous mistake by Steve Harvey, the announcer of the winner of Miss Universe, who inadvertently gave the title to Miss Colombia before correcting himself and awarding it to Miss Philippines. 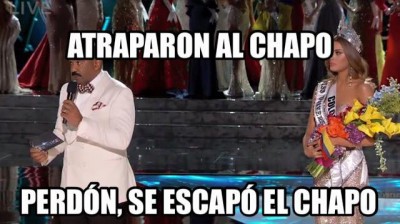 Meme: “Here I am thinking of my next escape”

El Chapo got caught today. He will escape in:

There were also others who wondered how this determination by the authorities to recapture El Chapo was absent in relation to other crimes, including the mass abduction of students from the Ayotzinapa Rural Teachers’ College in 2014.

The Mexican government could capture El Chapo, but they still can't find the missing 43 students in Ayotzinapa

Regardless of what the future holds for El Chapo his latest re-capture has left a trail of collateral damage in Mexico including approximately 600 people displaced after the manhunt carried out by the Mexican marines in the region.