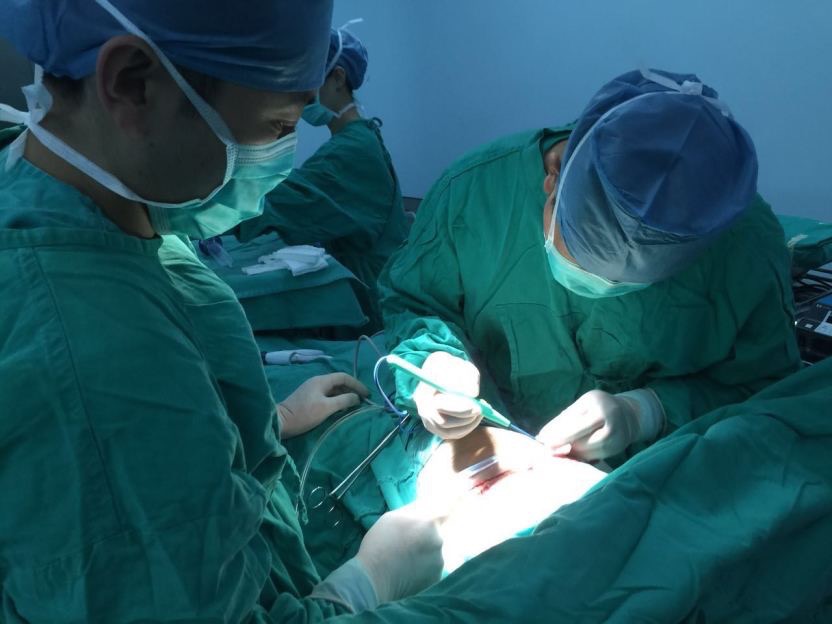 “He is Ren Nengping. I saw a coffin he had prepared for himself at a glance when entering his home,” said Yuan Li, a well-known Chinese movie actress who has been raising awareness about black lung patients for years.

“I hope his surgery [transplanting healthy lungs] will meet with success. The operation can be watched live online.”

In 1997, Ren began working at a mine in Henan province, where he saw his fellow miners never wore masks and thus grew sick from black lung, or coal pneumoconiosis.

But he was not aware of this and did not take necessary protection measures at his place of work until he was diagnosed with the disease in 2005.

Ren had been suffering from the disease for over ten years and was critically ill, meaning the 38-year-old was unable to afford tuition fees to educate his two children.

“[Yuan] burst into tears when seeing I was languishing under pneumoconiosis,” said Ren on China's Twitter-like Weibo.

Yuan met him in Xiangyang village, Shaanxi province last July, when she was researching the health of black lung patients in rural areas.

That trip was part of the Love Save Pneumoconiosis project.

Wang Keqin, a well-known investigative journalist, created the project in 2011 after years of fearless journalism.

It aims to bring attention to the plight of workers too poverty-stricken to protect their health.

Pneumoconiosis is an occupational disease that ruins lung tissue and stems from inhaling too much dust particulate.

The disease is untreatable by any method other than lung transplant and affects almost 6 million patients in China according to the annual report issued in 2014 by the project.

Yuan contributed 400,000 yuan (approximately $6,100), with a further 200,000 yuan donation from the auction of the works by painter vitriol Fan in order to arrange the January 6 surgery performed in Wuxi, Jiangsu Province.

The live surgery drew the attention of around 52 million netizens on Weibo.

A brain-dead patient from Guilin, Guangxi province, contributed his healthy lungs, which were transplanted to Ren after they arrived in the operating theatre.

Following a two-hour effort, Dr. Chen Jingyu, who led the operation, said it had met with success. 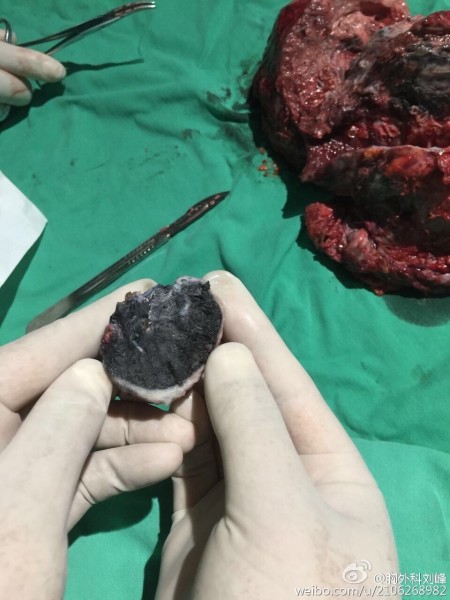 A doctor took out a black nugget from Ren Nengping’s lungs. (From Liu Feng's Weibo.)

What generated most amazement among netizens was a rigid black nugget of around four centimeters in length that was stripped from one of Ren’s lungs (video contains disturbing images). Dr. Chen said some nuggets — the fatal calling card of black lung — were up to 10 cm in length.

The National Health and Family Planning Commission issued regulations on preventing and curing pneumoconiosis back in 1987, yet a large number of migrant workers continue to suffer due to unscrupulous employers and an inability to access medical care.

Zhang Haichao of Henan province was one such worker. In 2009, when he began seeking treatment, the company he worked for refused to provide a health testimonial as required by the local health clinic.

The health clinic in turn concealed the true diagnosis when it eventually examined Zhang and the hospital he turned to made a probable diagnosis that was later rejected by the local health department.

In desperation, Zhang resorted to surgery to acquire a sample section from his lungs in order to obtain a health testimonial that proved he was suffering from black lung disease.

Zhang was eventually transplanted with a pair of healthy lungs in 2013.

The National People’s Congress issued a revised law for the prevention and cure of occupational diseases in 2011, which demands employers “must provide employees effective protection facilities and articles against occupational diseases” and “inform them of the potential risks of getting disease during work.”

In reality, some enterprises did not value and carry out responsibilities for the prevention and cure of occupational diseases. For example, some did not write clearly the “harmful factors of occupational diseases” when signing contracts with employees, most of whom are at risk of getting occupational diseases under conditions of ignorance. In order to cut costs, some [employers] did not provide employees with relevant health protection and professional training, concealed occupational hazards, and even concealed the truth that the job itself is poisonous and harmful. 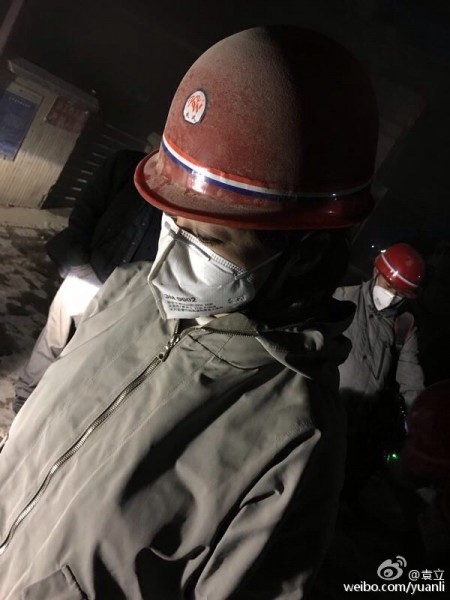 Yuan Li, an actress, worn a mask and a safety helmet covered with dust. Image from Yuan Li's Weibo.

Only two days ahead of the surgery, Yuan called for more attention and protection for workers after seeing the dusty conditions in a porcelain factory:

This is a porcelain factory, I smelled a gust of a pungent odour before entering. I merely stayed here for ten minutes. Look at the dust on my safety helmet. It is easy to get infected with black lung here. When we are washing our hands in sinks and using other porcelain products that are good quality and cheap, please remember the high price hard working migrant workers have paid. It is imperative [for them] to be provided with appropriate masks!!!

But what of Ren, whose successful surgery was viewed online by millions?

Sadly, four days after the successful surgery, Dr. Chen relayed the news that Ren had died from a cardiac arrest and a variety of other complications on the night of January 9.

“Yes, he just passed away. I feel extremely woeful, sorry,” wrote Yuan Li on her Weibo.