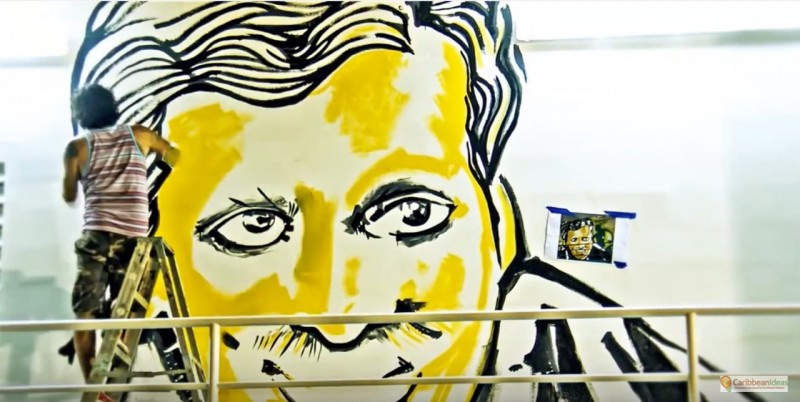 Screen grab of a YouTube video of Trinidadian artist Darren Cheewah painting a mural of the late steelpan composer and arranger, Jit Samaroo in the Renegades panyard.

The steel pan is the only surviving instrument to have been invented in the 20th century. Created in the 1930s, it was the result of a unique cross between Trinidad and Tobago's energy industry (the steel drums were originally used to store petroleum) and the strong desire for cultural self-expression — particularly among low-income young men — in the face of societal disapproval.

On Thursday January 7, 2016, the country was plunged into mourning as one of the masters of the steel band movement, Jit Samaroo, passed away after years of suffering from Alzheimer's disease. He was 65 years old.

Samaroo was best known as an arranger for the wildly popular Renegades steel orchestra — a band of musicians all playing different versions of the instrument — as an ensemble, usually accompanied by percussion (called a ‘rhythm section’). He led the band to an astonishing nine Panorama (the illustrious, annual steel band competition that takes place each Carnival) titles during his tenure, winning three of them successively — the only time that feat has been accomplished in the history of the competition.

In light of the fact that Panorama 2016 begins this evening, his death has dealt an even harder blow. On their Facebook page, the Renegades posted this message:

On behalf of the Renegades Steel Orchestra, we must say THANK YOU! Dr Jit Samaroo for devoting your entire life to this band….thank you for the great music….thank your for the history we created together……thank you for the special memories…..this one's for you!

In another Facebook tribute, the band's sponsor, BP Trinidad & Tobago, noted that:

Jit has for decades been part of the bpTT family and will also be remembered for his role as leader, mentor, advisor and friend to members of the BP Renegades Senior and Junior orchestras and everyone else who had the honour to meet him and work with him.

The steel band world has lost one of its gems today. Dr. Jit Samaroo was a humble musical icon and a dedicated family man. His contribution to music will always be remembered . My condolences to the Samaroo family.

Samaroo was interviewed about his arrangement for the piece here:

The pan world lost one of the biggest icons today. Jit Samaroo is credited with pushing pan to the next level and has written some of what is still known as the most difficult and genre defying music ever to come from Trinidad and Tobago. Everyone is going to post PAN In A Minor, However, those that have played it knows that Mystery Band is on some other plane of existence – difficulty wise. Rest in Peace Jit Samaroo and our sympathies to your beautiful family.

Pantrinbago, the world governing body for steel pan, also expressed its condolences and posted an interesting history of Samaroo's career: he was the recipient of two national awards, the Hummingbird Medal of Merit (Silver) in 1987, and the Chaconia Medal (Silver) in 1995.

The National Parang Association of Trinidad & Tobago (Samaroo began his musical journey as a Parang player), was saddened at the news, calling Samaroo a “master steelpan player, composer and arranger”. Samaroo was also hailed as a “giant”, a “legend” and a “musical icon”.

A member of one of Trinidad and Tobago's great steel pan families, Barry Manette, recalled meeting Samaroo for the first time:

I have played with Renegades Steel Orchestra for 2 years; just so I could meet and be in the presence of the great Dr. Jit Samaroo. I would never forget the first time he met me, he came up to me and said ‘you're a Mannette’ I, totally lost for words as my mentor had spoken to me for the first time, somehow just muttered ‘yes, I am’ He then stretched out his hand to shake mine and said words I would never forget; ‘It's an honor to have you play in my band’ All I could do was say ‘Thank you, the honor is mine’

Such a brilliant, masterful arranger and composer yet a quiet and humble man whose music spoke volumes. The greatest steelpan arranger who in my respectful view deserved more than the nine victories he led Renegades to. Rest in Peace Dr. Jit and my heartfelt condolences to Amrit Samaroo and the entire Samaroo family, to Renegades and Supernovas Steel Orchestras. His legacy will live on forever.

Many netizens are gleaning some comfort from the fact that Samaroo's legacy will be carried on by his son Amrit — the arranger for another steel band, Supernovas, which will compete in the large band category of this year's National Panorama competition. The band performed a musical tribute to the elder Samaroo at a previous Panorama competition:

While some people felt that pan music would never be the same again, NH Productions TT put it this way:

Through his son, Amrit Samaroo and the Supernovas Steel Orchestra, Dr Samaroo's musical journey has not ended, but rather reborn. […]

We know that Dr Samaroo will now be playing his sweet pan melodies for the Angels.

But perhaps ART-ery summed it up best:

Some people will never really die. Thanks for everything, Jit Samaroo.