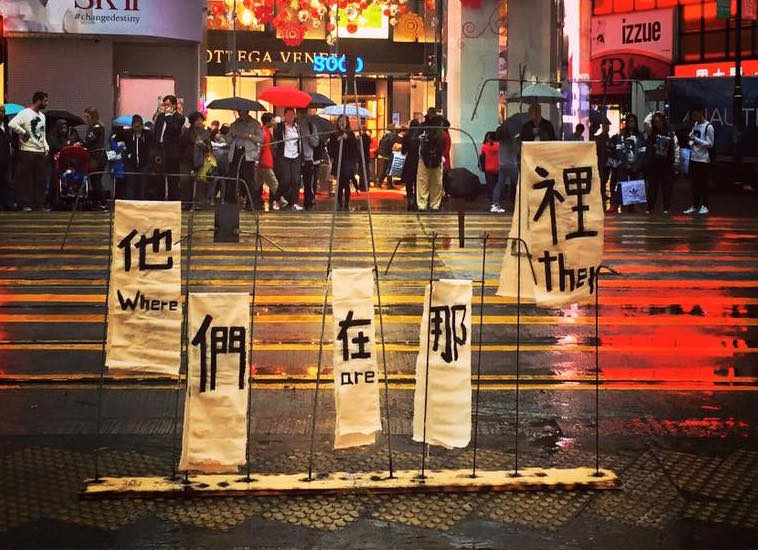 This post was written by Koel Chu and originally published on Hong Kong Free Press on January 6, 2016, and republished on Global Voices under a partnership agreement.

A street art installation appeared in Hong Kong's downtown shopping district Causeway Bay during the evening of January 5 festooned with the words “Where are they?”

Titled “Five Missing Men,” the installation is a response to the recent disappearance of five people connected to a nearby bookstore specializing in titles critical of China’s ruling Communist Party.

Co-owner Lee Bo, who went missing on December 30, is suspected of having been abducted by Chinese security forces in Hong Kong. Four others from the same bookstore disappeared from their residences in Shenzhen and Thailand, respectively, in October.

Hong Kong police have started investigating their disappearance and inquired about Lee Bo's status with mainland Chinese police. Thus far, there is no official response from mainland Chinese authorities on the whereabouts of the missing five. But China’s Foreign Minister Wang Yi described the missing Hong Kong bookseller as “first and foremost a Chinese citizen” in response to British Foreign Secretary Philip Hammond's “deep concern” about the incident, as Lee Bo is a British passport holder.

Under the “one country, two systems” principle, special administrative region Hong Kong enjoys judicial independence from the mainland, and Chinese authorities do not have jurisdiction to operate there without prior approval.

The artist behind “Five Missing Men” told Hong Kong Free Press that the incident was “twisted” and “crazy,” adding that the installation was intended to block the road just as the incident itself has affected people’s daily lives.

“This incident of the five missing people has disturbed our common order of life and the values that we believe in. We cannot and should not turn a blind eye to this,” he wrote on Facebook. “Normal daily life is not normal any more.”

Most people who saw the installation gave no immediate reaction, the artist said, which had been his expectation. Although most knew about the missing booksellers, their responses have remained online only, he said.

In creating this work, the artist said he hoped to inspire people to reflect on what actions they could take, as people have “the responsibility to do something.”