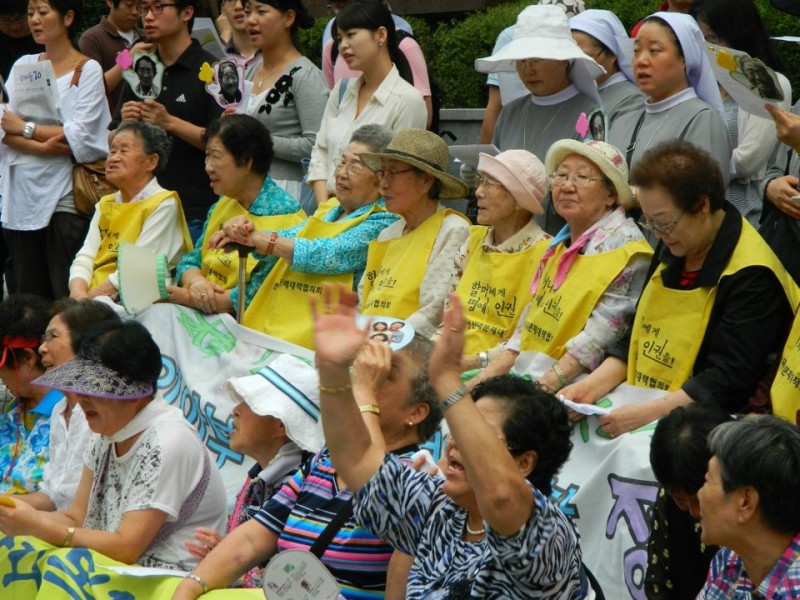 Surviving comfort women rally in front of the Japanese Embassy in Seoul, August 2011. Image from Wikipedia.

The governments of Japan and South Korea appeared to reach an agreement on December 28, 2015, to “finally and irreversibly” resolve the issue of “comfort women.” However, judging by the reaction of the the remaining living comfort women themselves, the December 2015 agreement appears to be aimed primarily at mending relations between the two governments rather than healing the wounds of the past.

In World War II, up to 200,000 women from more than ten countries across Asia were forced into sexual slavery by the Imperial Japanese Army. These women were euphemistically called ianfu (comfort women) in Japanese, and have long been a source of political controversy.

Under the December 2015 agreement, Prime Minister of Japan Shinzo Abe “expressed anew his most sincere apologies and remorse to all the women who underwent immeasurable and painful experiences and suffered incurable physical and psychological wounds as comfort women.”

Prime Minister Abe's apology is notable for two reasons. Although former Japanese Prime Minister Murayama Tomiichi and former Foreign Minister Kono Yohei had both issued statements in 1995 (the 50th anniversary of the end of World War II) acknowledging that women across Asia had been forced into sexual slavery, these apologies had been perceived by Korea and other countries affected by the issue to be personal statements and not official government apologies.

As well, Abe is widely perceived to be a right-wing hawk and is regarded with suspicion by some of Japan's neighbors. Attempting to repair relations with South Korea by addressing outstanding issues from World War II was unexpected.

As part of the agreement, the Japanese government has set up a ¥1 billion (US$8.3 million) fund for the 46 living comfort women in South Korea. These women and their relatives were apparently not consulted by the South Korean government before the agreement with Japan was reached, with acrimonious results.

In a video now viewed more than 587,000 times, on December 29, the day after Japan and South Korea reached an agreement, South Korean Deputy Foreign Minister Sung Nam-Lin was confronted by an unnamed surviving former comfort woman. 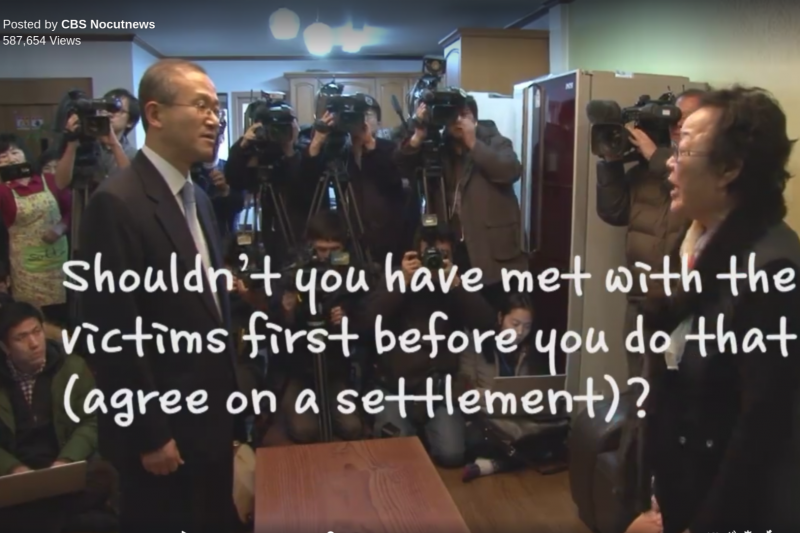 The Korean Council for the Women Drafted for Military Sexual Slavery by Japan issued a statement condemning the agreement, saying:

The Korean government’s attitude towards this Agreement, which is vague and incomplete, is rather shocking. The government concurred that this Agreement represents a “final, irreversible” settlement of the issues, as long as the Japanese government is committed to the due diligence in the future. Meanwhile, the Korean government promised that it will seek a resolution for the matter of the Peace Monument in front of the Japanese Embassy in Seoul in order to maintain the dignity of the Embassy, and will limit its criticism against Japanese government internationally. This is a diplomatic humiliation.

Reaction in Japan to the agreement has generally been positive. Former Prime Minister Murayama Tomiichi welcomed the deal, while Japanese Communist Party leader Shii Kazuo, who has long been a fierce critic of Prime Minister Abe's agenda, said the deal “restored dignity and respect” to the comfort women.

Some ordinary Japanese people took to social media to argue that the comfort women were never coerced by the Imperial Japanese Army—and by extension the Japanese government—at all, and instead were conscripted by private contractors who alone were responsible for the horrible conditions of abuse and virtual slavery the women endured.

Tamogami Toshio, an ultraconservative former air force general and chief of staff who now serves an elected member of Japan's national Diet, summed up what many belonging to Japan's right wing might be thinking of the agreement. In a tweet that has been shared 1,400 times, Tamogami says:

At the joint press conference, Japanese Foreign Minister Kishida said that the Japanese and South Korean governments working together would help restore dignity and respect to the former comfort women, and the initiative is aimed at healing the wounds of the past. Isn't this all a bit odd? Who is going to restore the tarnished reputation of the Japanese armed forces and fighting men? I want to ask the Liberal Democratic Party [of which Prime Minister Abe is the leader, and of which Tamogami is a member]: are you truly interested in restoring pride to our country Japan?

This all pisses me off, but what can you do?