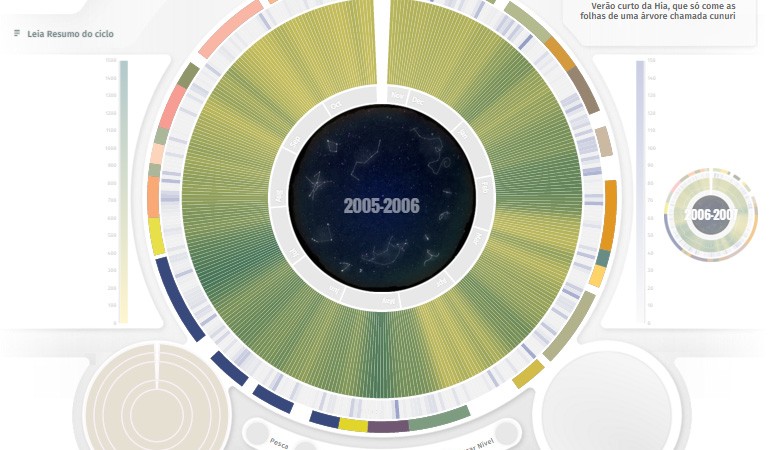 Annual cycles of the indigenous peoples of Rio Tiquié.

The indigenous calendar of the cycles of the Tiquié River is now available. During the United Nations Climate Change Conference (COP 21) in Paris, the Socio-Environmental Institute (ISA), in partnership with InfoAmazonia, released the calendar. The work is a result of collaborative research developed by indigenous communities and associations from the Upper Rio Negro, in the northwestern corner of the Brazilian state of Amazonas, near the border with Colombia.

Together with ISA, the indigenous nations of the Tiquié River presented original research that identifies in their river basin the cycles of fishing, hunting, planting, and harvesting. The cycles are linked to other elements, such as the hydrological cycle and astronomical constellations. The data was collected between 2005 and 2008 with the participation of a team of researchers and representatives chosen by each community.

The research, rooted in indigenous knowledge and cultures, may indicate processes of climate change observed locally, expressed in the effects caused to the ecosystems of Tiquié River and its surrounding region. One of the research objectives is to conserve the biodiversity in Upper Rio Negro, in Amazonas, Brazil.

The website, in Portuguese and English, can be viewed here.