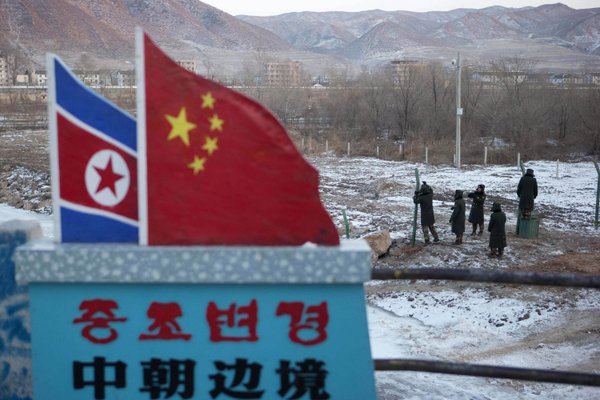 North Korea announced on January 6, 2016, that it had carried out the country's first hydrogen bomb test. Though experts doubted [2] if the explosion was really caused by H-bomb, China's earthquake administration detected a 4.9 magnitude tremor along North Korea and China's border, and news wires from both Japan and South Korea said the quakes were caused by the test.

Instead of condemning the nuclear test, Beijing took a more moderate stance, saying it [3] “firmly opposes” the test and urged North Korea to “remain committed to its denuclearisation commitment”.

On the other hand, Chinese netizens grew more and more impatient with the government's tolerance of their “insane” neighbor. It wasn't only polarizing US Republican presidential candidate Donald Trump who said China is the one who should deal with North Korea [4]. On Chinese Twitter-like Weibo, many voiced their criticism of the government's diplomatic policy in a news thread discussing North Korea's H-bomb test [5].

Below are a selection of popular comments that have received more than 1,000 likes:

H-bomb! Shouldn't we be the one to worry about? Such a dangerous weapon is under the control of the dictator of such a dangerous country? Do you think this is a joke?!

Our neighbor is a nut, a nut with weapon.

The heavenly kingdom [of China] should bear half of the responsibility!!!

China should sanction it. North Korea is a thug, someday it will bring a H-bomb to China's courtyard.

Ha! Without the support of its brother located to the west on the map, how can [North Korea] gets a hold of this new toy? We can't be sure what direction the H-bomb is pointing. The US fed the ISIS, now it has gone wild. You, China, are now feeding North Korea. When the time comes…

Spent so much feeding a disaster! Radiation can travel to Dongbei [China's northeastern region], right?

The frustration of Chinese netizens was explained in commentary [6] by Chang Ping, who stressed that China is the major victim of North Korea nuclear tests:

Who is the victim of [North Korea's] series of nuclear tests? The answer is clear: China and only China. There is no other country in this world like North Korea which has brought damage to others during nuclear weapon tests. […]

The potential damage done to South Korea and Japan in the nuclear tests is nuclear radiation. But the Chinese foreign ministry has helped North Korea by announcing that the tests thus far have not done any harm to the environment or public health. Which means the threat to Japan and South Korea is still in the future tense. But that's not the case for people living in the northeast region of China. According to China Central Television's report, earthquakes occurred along the border of China and North Korea including in Yanji, Hunchun and Changbai provinces. For those living in Yanji, they felt their furniture shaking and some offices evacuated their employees. Cracks appeared in the playground of a high school and students were evacuated. Their exams were interrupted. If North Korea continues to test its nuclear weaponry, more catastrophes could occur in China. Some reports said that the series of tests polluted the soil and ground water along the border. [The public sentiment is] not as calm as the Chinese foreign minister's response.

Propaganda has made many Chinese believe that North Korea is China's brother and comrade in fighting against the US hegemony. But history tells us that humiliation usually comes from within. The brothers end up fighting against each other. China and the USSR were on the verge of entering nuclear war; China and Vietnam had the most bloody war. In the future, the chances of a China-North Korea war is higher than China-US.

Chinese economist Han Zhiguo posted [7] on Weibo a map of the H-bomb test site in North Korea to indicate the impact of the North Korean nuclear crisis on China and commented: 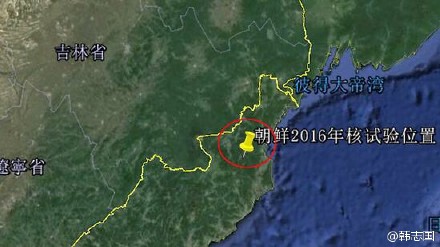 Map showing the H-bomb test site in North Korea. It is much closer to China than any other country. Image from Han's Weibo.

Should not breed a virus to do harm concerning North Korea: North Korea is hitting two birds with its one nuclear test: threatening the US, Japan and South Korea, and showing off to China. China has been dealing with the issue with tolerance rather than joining the international communities to sanction the country. The consequence is breeding a virus: North Korea has a nuclear H-bomb. While the US, Japan and South Korea are equipped with anti-missile weapons, how can the northeastern region of China protect itself from nuclear pollution and disaster?