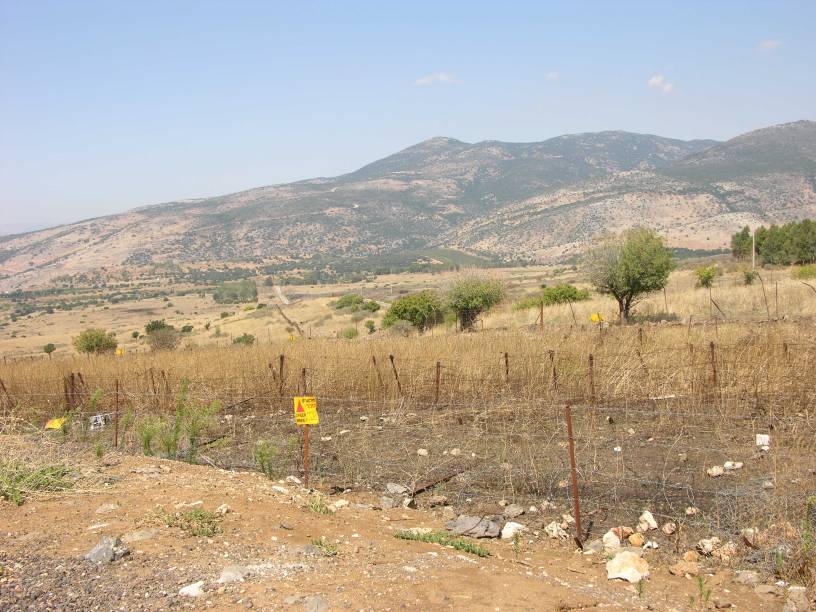 Tel Faher, mine fields surrounding the former Syrian outpost, in the background part of the Shebaa farms. Photo by Chaver83 via Wikipedia.

Israeli forces have shelled the southern Lebanese town of Al-Wazzani near the border between the two countries in a retaliatory attack against the political party and paramilitary group Hezbollah. Local media reported there were injuries.

The firing came in response to a roadside bombing of Israeli military vehicles in the Shebaa farms area, for which Hezbollah took responsibility. While the group claimed its actions had injured soldiers inside a Hummer vehicle, Israel Defense Forces spokesman Peter Lernet affirmed that there were no casualties in the incident.

Hello @Brian_Rohan @AP there we no casualties in the incident.

In a televised speech on December 21, 2015, Hezbollah Secretary General Hassan Nasrallah vowed his group would avenge the death of commander Samir Kuntar, killed in an airstrike in Damascus for which the group blamed Israel. “It’s possible that the Israeli enemy misinterpreted…And this Israeli thought Kuntars wasn’t that important to Hezbollah and didn't imagine that we would adopt his martyrdom and his revenge,” Nasrallah said.

Who was Samir Kuntar?

Kuntar rose to prominence within Hezbollah, which is fighting in Syria to support Bashar al-Assad as his regime clings to power against forces that would see his ouster, after his release from Israeli prison as part of a prisoner swap in 2008. He had been convicted of murder in the kidnapping and killing of an Israeli father and his 4-year-old daughter in 1979 while a member of the Palestine Liberation Front. The mother accidentally smothered their other child, 2 years old, while hiding from the intruders. Kuntar was 16 years old at the time.

Kuntar, who was shot in the ensuing shootout with police, initially accepted responsibility for the deaths, but later maintained he had nothing to do with them. He claimed he and his team had intended to only take hostages and that Israeli fire had in fact killed the father; he said he didn't know how the little girl had been bludgeoned to death.

He was particularly despised in Israel, but received ceremonial honors from leaders in Lebanon, Syria and Iran upon his release. He had reportedly been working around the Israeli-occupied Golan Heights to liberate the area, which Israel captured in 1967 from Syria and annexed in 1981 despite condemnation from the United Nations Security Council.

The group that Hezbollah said carried out the roadside bombing was named after Kuntar.

It's not the first time that Israeli and Hezbollah forces have come to blows along the border. In 2006, more than a thousand Lebanese and about 150 Israelis were killed in the 34-day July War. The United Nations brokered a deal to end the fighting at the time.

Only Israel could occupy parts of two countries, bomb one, shell another, then play victim. Expect weeping shortly. https://t.co/briARCPo1j

A number of users tweeted using the Shebaa farms hashtag to show support for the actions taken by Hezbollah:

The graveyard of the Zionist entity #ShebaaFarms

How about #UNIFIL do their job and stop #hezbollah from firing at #Israel in first place? https://t.co/3YlGVIonzJ

Founded in 1982, with backing from Iran, after the Israeli invasion of southern Lebanon, Hezbollah is today stronger than the Lebanese army and is often described as a “state within a state.”