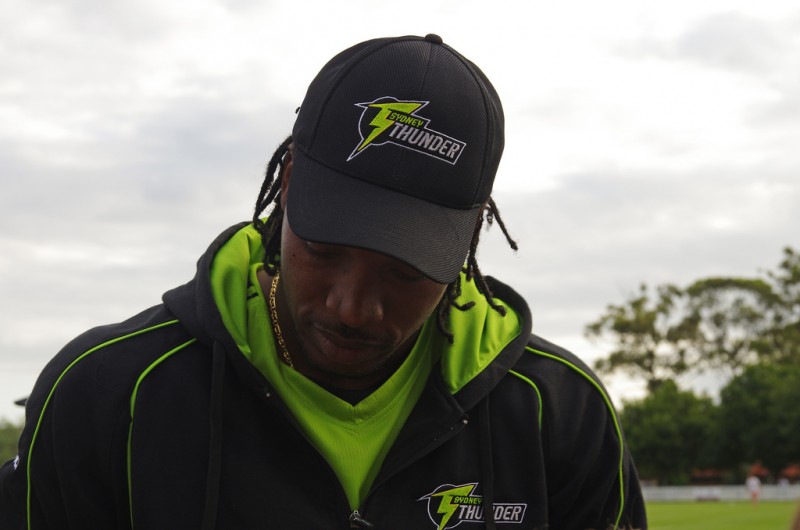 West Indian cricketer Chris Gayle has landed himself in a firestorm of criticism after he hit on Australian sports reporter Melanie McLaughlin during a live television interview. McLaughlin was keen to talk to Gayle about his batting performance — he had just made 41 runs off a mere 15 balls during his innings for the T20 (limited overs) cricket team, Melbourne Renegades, in their Big Bash League match against Hobart Hurricanes — but in response to her question about how he approached the innings, Gayle replied:

McLaughlin was adamant that she was not blushing — in fact, she looked quite uncomfortable during Gayle's advances — and quickly changed the subject to whether the cricketer had experienced any injuries.

Online disapproval of Gayle's behaviour — and support for McLaughlin — was swift and prounounced, particularly on Twitter:

That was not harmless fun Chris Gayle It was unrelenting, disrespectful and sordid behaviour on live TV #ChrisGayle #BigBash

#ChrisGayle Chris Gayle teaching all men how not to treat a woman. #trustmeshewasntblushing

#ChrisGayle took advantage of position. “That's Chris for you” not an excuse. Credit to @Mel_Mclaughlin for how she handled herself. #BBL05

One Twitter user lamented that women often have to deal with these kinds of remarks at work, no matter what profession they choose:

It's just a shame it undermines her as a sports presenter. #chrisgayle #BBL05

Some Twitter users were so offended that they got personal, bringing the West Indies team into the fray:

Others chose to see the humourous side of the situation:

On the other hand, quite a few Internet users thought that the whole fiasco was “much ado about nothing”:

Less Twitter outrage when Isis stones someone to death for ‘crime’ of homosexuality than when #chrisgayle gives 20sec interview. Mental. 🏏

Too many people get offended too easily, whinge about anything. Chris Gayle is the man #DontBlushBaby #ChrisGayle

feminism has turned into the prohibition of complimenting a female person's eyes and asking her out. #BBL05 #ChrisGayle @BBL

Some Twitter users actually predicted that there would be a huge “gale” over Gayle's comments:

Was clearly a bit of fun but just wait for the outcry. #BBL05 #chrisgayle

On the Trinidad and Tobago news station C News Live's Facebook page, commenters said they expected nothing less (or rather nothing more) of Gayle:

Steups. Lighten up people. Everything is such an issue. Its Gayle. If you follow cricket and know the character of this man you know he's a joker, always making people laugh. Aussies and their Hitler style of cricket. OMG

It's Gayle ??? That's your reasoning. You can't make women feel uncomfortable in the spot light like that doing their job. It comes off negatively. You can see she wanted to leave immediately, why do women that, wrong place wrong timing…

Trinidad-based satirical website Wired868's Mr. Live Wire admitted that Gayle was a bit of a wild card, but said that he misread the play entirely in this case:

It was hard to tell whether Gayle—who is 36 years old going on 15—was channelling his inner-Tiger or bootlegging Austin Powers. Either way, his swipe outside the off stump hit only air.

At the same time, he maintained that:

Gayle did not insult, grope, or intimidate McLaughlin. He was simply childish, cocky, and stupid. So perhaps the penalty should match the crime.

Not everyone was quite as forgiving. On Wired's Facebook page, Vernal Damion Cadogan shared a link of the interview and said:

This is considered sexual harassment in professional environments in the civilized world.

Gayle went too far. It looked unprofessional and school-boyish. Like he never saw a beautiful woman before or he figure because he's Chris Gayle she must be a groupie for him. Hearing the Aussie commentary was enough. He stepped out of line with those crass pick up lines. If it was after the interview it would not be an issue but not during!

At the time of this writing, McLaughlin had not mentioned the incident on her Twitter feed, but Gayle, who may have already been feeling the heat, retweeted this comment by Piers Morgan:

Whatever side people may be on, Twitter user Kelly Franco succinctly summed up netizens’ reaction to the interview:

Gayle has since apologised for his comments. Nevertheless, he will be fined by his team for his “inappropriate” remarks.