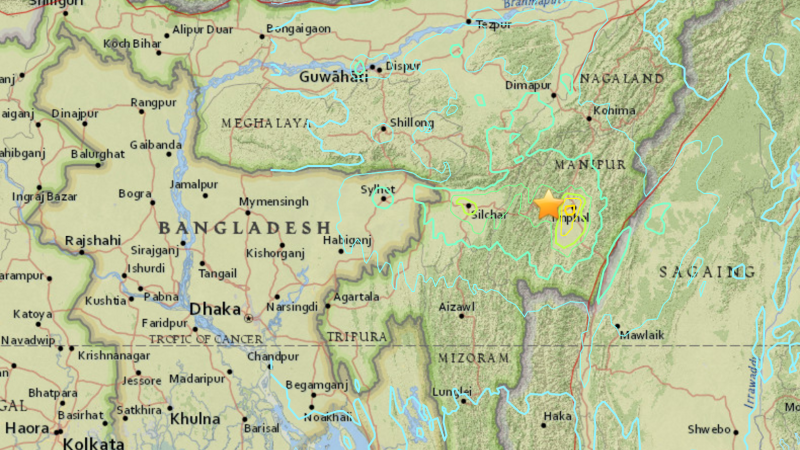 A powerful 6.7-magnitude earthquake [2] hit Imphal [3], the capital of the northeast Indian state of Manipur, in the early morning of 4 January 2015, followed by several aftershocks. The earthquake was felt strongly from many locations in India's east as well as parts of neighboring Bangladesh, which lies west of the quake’s epicenter. Neighbouring Myanmar, Nepal and Bhutan were also touched by the tremor.

Many buildings in Imphal and surrounding places experienced structural damage, and mud houses were destroyed in nearby villages.

According to the US Geological Survey [6], the earthquake was caused by sections of the earth rubbing alongside each other at vertical, or nearly vertical, fracture points in what is known as a strike-slip fault.

The earthquake hit at 4:35 in the morning local time at a depth of 17 kilometres below the ground level. People who felt the shaking took to Twitter to update the world.

Aaman Wadud tweeted from Guwahati, about 300 kilometres from the epicentre:

Just experienced the strongest #earthquake [7] of my life. Guwahati is shaken. It's 4:41AM and my entire neighbourhood is out on street.

Sorokhaibam Akee posted an image of a damaged building:

Patients are told to stay outside as Imphal Hospital suffered huge cracks in the building. pic.twitter.com/qrtqvYGpKu [13] 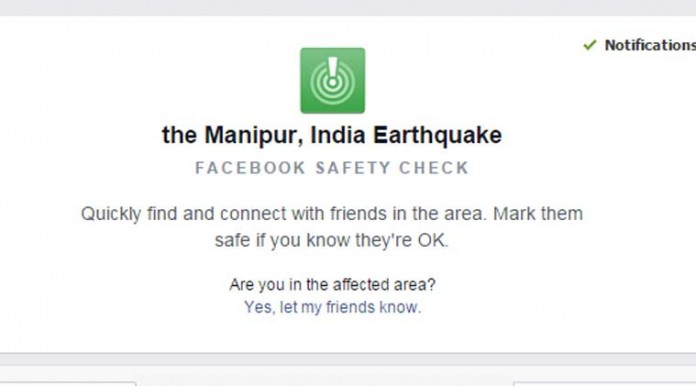 The mainstream media soon were updating:

Walls of building collapsed in Imphal after earthquake hit the region pic.twitter.com/wNZZ4AU4bs [19]

Data Scientist K Rahul Dev Sharma stayed on the story throughout the day:

#ManipurEarthquake [24] Total blackout. No power supply for hours. Internet on smartphones remains the only source of information. @NDRFHQ [26]

Chitra Ahanthem reported on various issues surrounding the earthquake, such as the need for donated blankets and criticism of the integrity of local structures:

those wanting to help for #earthquake [7] in Imphal:extent of damage and casualties not high.but folks need blankets

Imphal’s iconic Ima Market [32], presumably the world’s only market where all the traders are women, has been damaged.

Crowdsourced images on the Facebook page of website Finding The Voice [36] showed scenes of destruction. A commenter, Luwang Laiva [37] wrote:

As of today, the safety within the premises of Ema market cannot be guaranteed… after shockwaves are likely to hit anytime soon.. I hope the authorities do the necessary asap to avoid any casualties…

When the quake hit Bangladesh, thousands of people rushed into the streets of the Bangladeshi capital Dhaka, about 350 kilometres from the epicentre. Most of the deaths in Bangladesh were due to panic rush [38]. At least 29 people were taken to hospital with injuries.

Bangladeshis were tweeting about the quake.

The earthquake was like alarm…woke everyone up, here in Bangladesh. Waiting for the aftershocks of this quake now. Be safe, everyone.

This earthquake has raised many questions about preparedness in Bangladesh. A Daily Star report today [42] quoting the Ministry of Relief and Disaster Management revealed that there are over 72,000 risky buildings in Dhaka city prone to earthquakes.