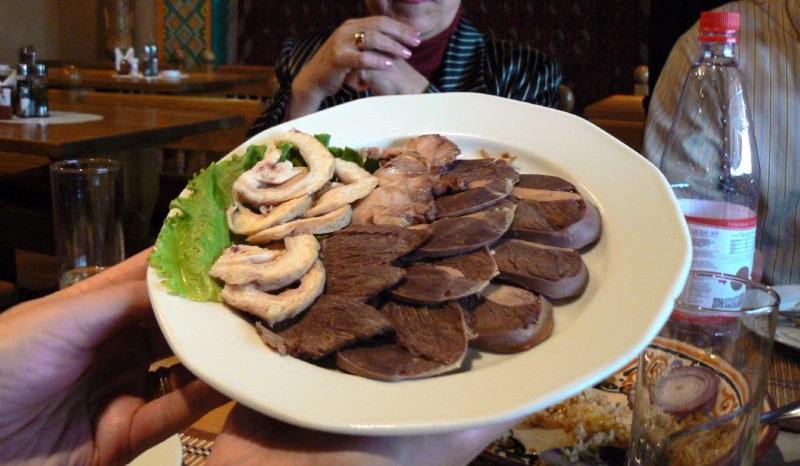 Did you hear the one about the British welder that worked for the Canadian mining company that made a joke about local people eating horse penis and was arrested on charges of inciting racial hatred?

People in Kyrgyzstan have heard nothing else in the last 24 hours as Michael Mcfeat's story was covered by many international [1] news [2] outlets [3] and social media circles buzzed with the news.

There have never been so many penises on the networks.

Freedom of speech? Cultural sensitivity? When it comes to an off-colour crack about horse genitalia issued by a foreign employee of a deeply unpopular company digging for gold in the mountains of an impoverished country, the lines are blurred.

And Kyrgyzstan is in the news for all the wrong reasons. Again.

Below [5] is a section from the Guardian and Agence France Presse's report on what has already been dubbed McHorsePenisGate by a leading member of Kyrgyzstan's Scottish expatriate community:

A Briton working at a gold mine in Kyrgyzstan has been detained and faces up to five years in jail for comparing a local delicacy to a horse penis, according to authorities.

Police detained Michael Mcfeat, an employee of the Toronto-based Centerra Gold, after he posted the comment on Facebook, which caused a temporary strike at the mine, an interior ministry spokesman said on Sunday.

Mcfeat wrote that his Kyrgyz colleagues were queueing for their “special delicacy, the horse’s penis” during holiday celebrations, referring to a traditional horse sausage known as chuchuk.

He now faces racial hatred charges, which can result in between three to five years in prison under Kyrgyz law.

A local trade union leader confirmed that work at the mine, which accounts for up to 10% of the former Soviet republic’s economic output, resumed on Sunday after a short strike.

The offensive New Year's Eve post, in which Mcfeat falsely claimed horse penis was a “delicacy” in the Central Asian country has since been deleted. It was followed by a misspelled “appology” from Mcfeat the day before he was taken into custody by police in the early hours of January 3:

I would like to take the opportunity to sincerely appologise for the comment I made on here about the kygyz people and horses penis. I truly never meant to offened anyone and im truly sorry as it was never my intension. I would also like to say the people in the picture had absolutely nothing to do with it. again im very very sorry.

Comments under the apology from unknowing friends and loved ones back in Scotland quickly went from lighthearted [6]:

Someone's got his phone – the spellings too good for him!!! X

While Mcfeat's arrest has proved a national embarrassment for Kyrgyzstan even bigger than Donkeygate [8] and other politically generated farces, it is one that has showcased the long-suffering Kyrgyz sense of humour.

This is the image [9] of the delicacy that Mcfeat either deliberately or unknowingly mistook for a horse's penis, posted in irony by a Kyrgyz Facebook user who noted the similar pronunciations of the Kyrgyz words for ‘horse sausage’ and ‘penis': 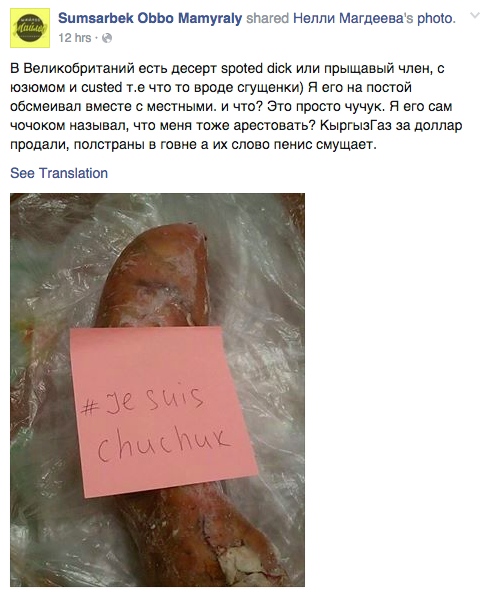 In the UK there is a dessert called spotted dick (a dick with spots), with raisins and custard, which is similar to condensed milk and custard ie something like condensed milk. I laughed about this with locals. So what? It's just chuchuk (horse sausage). I called it chokchok (penis) myself — will they arrest me too ? KyrgyzGas [national gas infrastructure] was sold for a dollar, half of the country is in the shit and they get wound up about the word penis. 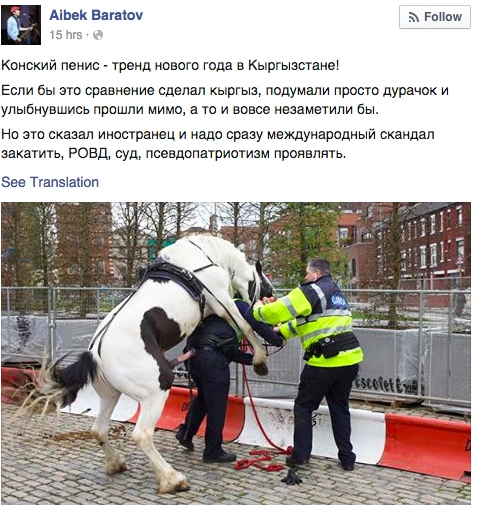 Horse's penis is the trend of the new year in Kyrgyzstan!
If a Kyrgyz had made the comparison, people would have thought him a fool, smiled and moved on not noticing him.
But because a foreigner said it it becomes an international scandal with district police, court and pseudopatriotism all over.

Horsesausagestan – a country without leadership, where the emotions of three-year-old hooligans rule the day.

Although there were many, that like some of Mcfeat's local colleagues, found cause for anger.

Its quite simple. This idiot wrote Kyrgy EAT horse penis as a national delicacy. Is this not an insult? I am convinced it is pure provocation. Many foreigners KNOW from what and how chuchuk is prepared.

This isn't about a prosecutor's legal opinion. It is a question of how expats relate to the local population, to local culture and to local colleagues.

Over on Huffington Post, commenter Alan Buckton composed [15] an ode to Mcfeat:

Noises made by the interior ministry today suggested Mcfeat's case was unlikely to be pursued further, but the damage has clearly already been done.

For the government of an aspiring democracy developing a nasty habit [16] of cracking down on free speech “McHorsePenisGate” is another wound inflicted unnecessarily by the negligence or wilfulness of a capricious political elite.

For the Centerra Gold company who remain deeply unpopular despite contributing around 7% of the country's GDP last year, it is another blot on a track record of PR disasters stretching back to 1997 when a company lorry spilled a batch of cyanide [17] into a local river.

So, no winners, then.